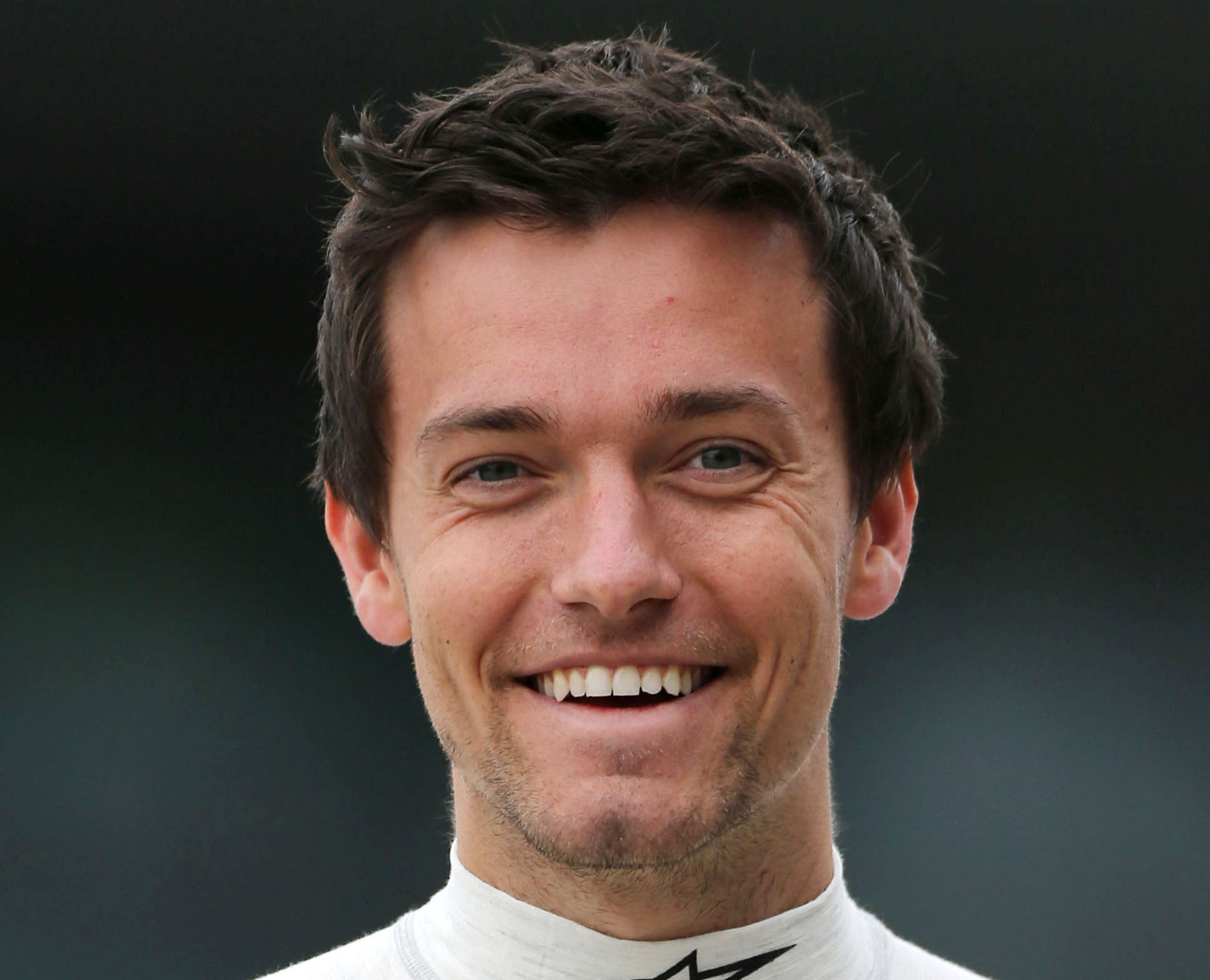 Racing brother in F1 'a dream' – Palmer
(GMM) Going wheel to wheel in F1 with his own brother would be a "dream", Jolyon Palmer has admitted.

But his younger brother Will is also racing through the single seater ranks, his latest achievement being the British Formula 4 title of 2015.

"It would be a dream to be racing in formula one and have my brother there as well," said Jolyon, referring to his 18-year-old sibling.

"It's a distant dream for now," he told the Telegraph.

But before Palmer and Palmer can begin to think about emulating the past feats of brothers Michael and Ralf Schumacher, it will be up to the older brother to hang onto his Renault seat beyond his single-year deal.

Jolyon's motor racing career was almost derailed completely at the age of 16, when a quad-biking accident resulted in him losing a kidney.

"Good weight-saving — maybe I should tell the engineers," he joked.

But now, the challenge is surviving F1.

"Formula one is such a difficult world," he admitted. "You have to look after yourself a lot because that's what everyone else is doing. If you don't, then you'll get spat out the other end."

Wehrlein to be Manor 'measuring stick' – Wolff
(GMM) Pascal Wehrlein leapt back into the running to race at Manor this year as the backmarker team got serious about its plans for 2016.

That is the claim of Mercedes team boss Toto Wolff, who had earlier hinted that better-funded contenders like Will Stevens and Alexander Rossi were more likely to secure the seat because of their superior sponsorship packages.

But Wolff told Germany's Auto Motor und Sport that he doesn't blame small teams like Manor from trying to maximize the money it can get out of its drivers.

"You have to respect that the teams want as good a financial deal as possible," he said.

Wolff therefore explained that at no time was Wehrlein guaranteed the seat just because Mercedes is supplying its title-winning engines to Manor this year.

"The engine was completely separate to the driver question," he said. "And so we exerted no pressure in this area."

Wolff said that Wehrlein, the reigning DTM champion, suddenly returned to serious contention for the 2016 race seat when Dave Ryan, the former McLaren sporting director, came on board.

"When Dave Ryan came to Manor, it became more and more clear that they wanted to have a measuring stick on the driver's side. To know what the car is able to do," he explained.

"The experienced people in the team knew that the best development in the world brings nothing if you have nobody in the car to push the throttle down.

"So we sat down at the table before Christmas to discuss the basic conditions," said Wolff.

Wolff said he thinks Manor, to benefit from Williams technology and top new technical staff including Nikolas Tombazis and Pat Fry, will have a much more competitive season in 2016.

"They have ambitious plans to bring the team forwards," he said. "The team is well financed, they have good technical people and the Mercedes engine. And now they have a good driver.

"Last year they had to tackle with the restructuring of the team, with a Ferrari engine that was a year old and a chassis that was hardly developed. But things are going to be different now.

"Now Manor will even use our second wind tunnel at Brackley. In this respect we can expect a big jump from them and I think even championship points," said Wolff.

Williams not ruling out 2016 wins, title – Massa
(GMM) Williams is not entering 2016 targeting another third place finish in the constructors' championship.

That is the view of Felipe Massa, who alongside Valtteri Bottas helped the Grove team beat giants like Ferrari in 2014 and Red Bull last year.

"For the size we are, Williams did a very good job in the last two years," Massa told the Sportv programme Ta Na Area.

"On the financial side, we are lower than Mercedes, Ferrari, Red Bull and McLaren, but now we are working harder to get closer to them and maybe have a chance to win again," the 34-year-old former Ferrari driver added.

And Massa also told Brazil's TV Globo: "The work is always to fight for the title. We have to put our feet on the ground as the others are also working hard, but I believe this will be the year where Williams will improve the most.

"Seeing the car," he revealed, "I notice that we have many new things, so we will try to close the gap to Ferrari and even Mercedes.

"I hope we can fight for victories and even the championship," said Massa.

To that end, Massa explained, Williams began work long ago.

"We were working on the 2016 car long ago," he said, "even before the end of the season. To get closer to the other teams that's what we need to do to develop a lot."

But he said he expects Mercedes, the back-to-back world champions of 2014 and 2015, to be strongest once again this year.

"They would have to make a big mistake not to have as competitive a car as they had in 2015," said Massa. "It is a year where nothing has changed in the regulations.

"I'm sure Mercedes will be very strong this year, but hopefully not as much as in 2015 so that other teams have the ability to fight them on equal terms."

Finally, Massa commented on his highly-rated teammate Bottas, who last year spent much of the season being strongly rumoured with a future move to Ferrari.

"He is an exceptional talent," Massa said. "Fast, very intelligent, very hardworking. He is developing and can develop a lot more. He will have the opportunity to win races and the championship.

"But I hope to be better than him (Bottas) this year," he smiled.

Alonso was 'demotivating' Ferrari – Montezemolo
(GMM) Fernando Alonso was not right for Ferrari because he was "demotivating" the great team.

That is the claim of Luca di Montezemolo, who was still president of the Maranello marque when in late 2014 the wheels of Alonso's departure were already in motion.

"I had the feeling that Fernando had got it into his mind that he could never win with Ferrari," Montezemolo said, "and that if he was in a Mercedes he could win with one hand.

"This was very demotivating for everyone," the colourful 68-year-old, who was ousted by Sergio Marchionne and now leads the Italian airline Alitalia, told the forthcoming April issue of Motor Sport Magazine.

But Italian Montezemolo insists that Alonso's exit has nothing to do with his talent.

"Let me be clear," he told the correspondent Mark Hughes during an interview in Rome. "I believe Alonso is probably the best driver in the world even today — certainly on a Sunday.

"Maybe not in qualifying, where I think Hamilton and Vettel are maybe faster over one lap, but in the race he is unbelievable — a machine.

"But we needed motivation and it made me think what we needed for the future," Montezemolo added.

He credits the great former Ferrari champion Michael Schumacher for helping to steer his protege Sebastian Vettel towards the red-coloured team.

"I recalled that when I was trying to convince Michael to return with us after Felipe (Massa)'s injury in 2009 he was saying 'The guy you need for the future is Vettel'," said Montezemolo.

That is the claim of Marco Canseco, the correspondent for the Spanish sports daily Marca.

McLaren-Honda debuted its novel, ultra-compact 'size zero' concept last year, where the tight packaging of the rear was possible because the turbo is located actually inside the 'vee' of the engine.

According to Britain's Motor Sport Magazine, the Honda turbo is bigger for 2016, with Yasuhisa Arai confirming that it will be "around the same size" as the Mercedes unit.

The 'size zero' concept, however, is staying.

Writing in Marca, Censeco said Honda test-bench runs since the first full 2016 chassis was put together confirm the turbo V6 is now more powerful but "the new turbo repeatedly breaks".

And "apparently there are still overheating problems, even though the new (turbo) now works at lower rpm of about 100,000 compared to the 120,000 of last year", Canseco added.

Marca said that after Sunday's online launch of the MP4-31, it is believed Fernando Alonso will be at the wheel on the opening day of Barcelona testing.

Earlier this month, lawyers for jailed team co-owner and title sponsor Subrata Roy and his Sahara company asked the Indian supreme court for permission to sell assets including his 42.5 per cent stake in the Silverstone based outfit.

Another 42.5 per cent is owned by team principal Vijay Mallya, who is having his own legal troubles with his companies United Breweries and Kingfisher Airlines.

Mallya pushed recently to have the team re-branded as Aston Martin, but the British luxury carmaker ultimately baulked at the deal.

The 85-year-old insisted he is "quite sure the last thing Vijay wants to do is to quit".

But Ecclestone added: "There's a lot of teams that if somebody comes along with the right cheque, they would sell. Not because they want to, but because commercially they probably think it would be the right thing to do."