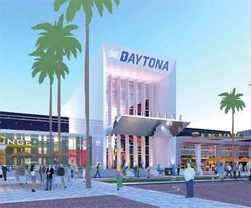 ISC yesterday announced that a number of businesses "are under contract and are expected to grab a spot" in its planned One Daytona development near Daytona Int'l Speedway, according to Eileen Zaffiro-Kean of the Daytona Beach NEWS-JOURNAL. Filling in the vacant property will be a P.F. Chang's restaurant, a Fairfield Inn & Suites by Marriott, clothing store Hy's Toggery that sells brands such as Tommy Bahama and Guy Harvey, sweets shop Kilwins Confections and a Marriott hotel "that will be called The Daytona."

This week's announcements "come after a dry spell for the project" that had previously "inked deals with Bass Pro Shops and Cobb Theaters."

The "original plan" was to hold One Daytona's first-phase grand opening last month "in concert with the completion" of the $400M overhaul of the Speedway's front stretch grandstands. But the project "bogged down after ISC changed development partners."

Now it is "back on track." Company officials said that they "plan to open their initial 300,000 square feet sometime" in '17 at an estimated cost of $120-$150M. It was not until yesterday that ISC "announced it would be calling the 144-room Marriott Autograph Collection hotel The Daytona, and that the flag for the other 105-room hotel would be Fairfield Inn & Suites by Marriott."

The companies that brought the hotels, Shaner Hotels and Prime Hospitality Group, "will also serve as the developer of a 268-unit apartment complex that will go up in the first phase of One Daytona." Daytona Beach NEWS-JOURNAL