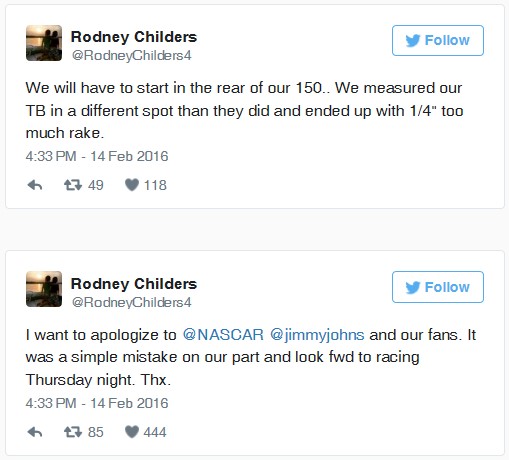 Three drivers were moved to the rear of their respective Daytona 500 qualifying race fields after inspection revealed that their cars did not meet NASCAR specifications during time trials Sunday at Daytona International Speedway.

Martin Truex Jr., Kevin Harvick and Brian Vickers are scheduled to start at the back of Thursday night’s 150-mile qualifying races that determine much of the starting order for Sunday’s 500, NASCAR's version of the Super Bowl.

Truex did not make a qualifying run Sunday after officials said a roof flap on his Toyota "was not in compliance with prescribed specifications."

NASCAR said the Furniture Row Racing team was not able to correct the problem in the five-minute window in which the driver must begin the qualifying run, thus forfeiting its attempt.

NASCAR said track bars on the Stewart-Haas Racing cars of Harvick and Vickers did not meet specifications, and their qualifying times were disallowed.

There is the possibility that NASCAR could issue additional penalties to the teams.

This also happened in 2015, when Dale Earnhardt Jr. and Denny Hamlin were sent to the rear of the Duel field for track bar issues. NASCAR did not further penalize those teams.

Rodney Childers, crew chief for Harvick, tweeted an explanation of the failure, plus an apology: