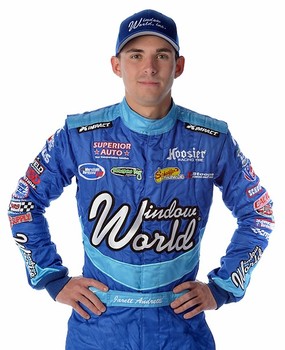 INDIANAPOLIS, IND. (February 15, 2016) – Continuing to grow, Andretti Autosport Short Track announced today the addition of MCL Restaurant & Bakery to its list of team partners and driver Jarett Andretti. MCL will be a season-long associate sponsor of Andretti as he prepares to compete in his non-wing 410 Sprint Car throughout 2016.
The new partnership was a natural one for both family owned and operated businesses. Just as Andretti Autosport Short Track team owner, John Andretti, is second-generation racer and son Jarett is a young third-generation driver, MCL family owners have also passed their traditions of excellence down through their own generations.
MCL has grown and spread to various locations through the Midwest making it a perfect match for Jarett’s upcoming 2016 season. Jarett will make a majority of his starts in Indiana, Illinois and Ohio, all locations where you can find a MCL Restaruant and Bakery. Jarett is ready to welcome MCL on board to the team.
“When you travel as much as we do, and you can’t get home, there is nothing more satisfying then finding a quality restaurant with fresh food and ingrediants," stated Jarett Andretti. “That’s what great about MCL Restaurant and Bakery, they are close to where we race and I know we can count on great food. I’m really glad they are on board with us this year and we’ll be racing hard to get their brand out in front of all the Sprint Car race fans."

Like the Andretti’s, MCL Resturant and Bakery is a family affair. The restaurant caters to those with children, offering a new kids meal desgined for 21st centuary kids and one that is great for their 20th centuary parents too. And, if you can’t make it the restaurant, their catering options are great for private events, weddings and corporate events. MCL is a must-stop this racing season.

"We could not be more excited to be partnering with Andretti Autosport Short Track and the No. 18 Car", said Craig McGaughey, President of MCL. "The fact that both organizations are family owned and operated and based in Indianapolis made it a natural fit. Jarett is an extremely talented young driver and an exemplary young man. We look forward to cheering Jarett on to many wins this season and growing our brands together in 2016 and beyond."
Jarett, the 2014 USAC National Sprint Car Rookie of The Year, is already scheduled to compete in nearly 75 total events with the Andretti Autosports Short Track Sprint car program. He is the pilot of the No. 18 Sprint Car. Jarett has championships in go-karts and the USAC Eastern Ignite Pavement Midget Series. He has also won Rookie of The Year honors at the Oswego Speedway in the supermodified class in addition to the USAC National Rookie of The Year. Jarett is an honors graduate at North Carolina State University.
For more information, please visit Andretti Short Track on Facebook and on Twitter at @AAShortTrack.
About Andretti Autosport Short Track
Based in Indianapolis, IN, Andretti Autosport Short Track is focused on short track racing competing on both pavement and dirt including a national presence under the USAC National Sprint Car Series and USAC Silver Crown banners among other sanctioning bodies. Owned by NASCAR, IndyCar, Sports Car and NHRA race winner John Andretti, Andretti Autosport Short Track is located in the same facility as Race and Championship winning organization, Andretti Autosport and mirrors the philosophy of winning on the track with an equal focus on professional representation of it’s partners.
About MCL
MCL, Inc. is a family owned and operated restaurant chain headquartered in Indianapolis. Established in 1950, the company operates 16 branded restaurants throughout Indiana, Illinois and Ohio. It specializes in serving a wide variety of high-quality homemade foods and baked goods. MCL also operates multiple catering venues and on site commercial food service locations in Indiana. Visit MCL on the Web at www.mclhomemade.com or call (317) 257-5425.