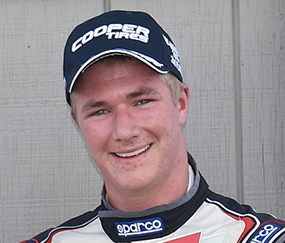 Cape Motorsports with Wayne Taylor Racing has completed its three-driver line-up in the Cooper Tires USF2000 Championship Powered by Mazda, adding the talented Anthony Martin to the team. The Australian won last year’s Rookie of the Year crown and finished fourth in the championship standings. The 21-year-old will join the previously announced Parker Thompson and Nikita Lastochkin in Cape’s international trio of USF2000 pilots.

“We’re delighted to announce that after a spectacular season that handed him the Rookie of the year honors in the 2015 Cooper Tires USF2000 Championship Powered by Mazda series, young racer Anthony Martin will be stepping into one of our cars for our 2016 campaign," enthused Dominic and Nicholas Cape. “We know from watching him last year the potential he has. With Anthony running alongside Parker and Nikita, we have a very strong team. We now have the opportunity to go to war and see what we can achieve as a team. Race wins are the motivation from the get-go."

Martin’s Rookie of the Year run in 2015 was a display in consistency, punctuated by three runner-up finishes that came at Barber Motorsports Park, the Mid-Ohio Sports Car Course and Mazda Raceway Laguna Seca. He scored five podiums in 16 starts and finished all but two races in the top-five, displaying immense talent and impressive maturity. Martin honed his skills in karting, scoring two Australian karting championships in 2012 before moving to the West Australian Formula Ford Championship in 2013, where he took two wins, and won both the Rookie of the Year and overall title, the youngest ever to do so. In 2014, Martin was back to defend his title and aided in the development of a new chassis. Once they got things dialed in, he came away with 12 victories in 21 starts and finished second in the final championship standings.

“I am very happy to be able to announce that I will be joining Cape Motorsports with Wayne Taylor Racing for the 2016 USF2000 Mazda Road to Indy season," Martin confirmed. “It is going to be a very strong field of drivers this year and I am very proud to again be a part of it. To be able to race for a very competitive and professional race team like Cape Motorsports is an honor and to be back in America to fight for the 2016 Championship is something I am very much looking forward to. The 2015 season was a great learning year for me in the USF2000 Championship and to finish fourth in the series and win Rookie of the Year, I couldn’t have asked for a better introduction to the American racing scene. To be back in the USA for 2016 would not have been possible without the continued support from my sponsor in Australia, Burgess BLA and, of course, my family."

The 2016 Cooper Tires USF2000 Championship Powered by Mazda gets underway on March 11-13 at the Grand Prix of St. Petersburg, although Martin will be on-track at the official series test, which takes place the previous weekend at Barber Motorsports Park. For more information on Cape Motorsports, please visit www.capemotorsports.com and to learn more about Anthony Martin, check out www.anthonymartin.com.au.