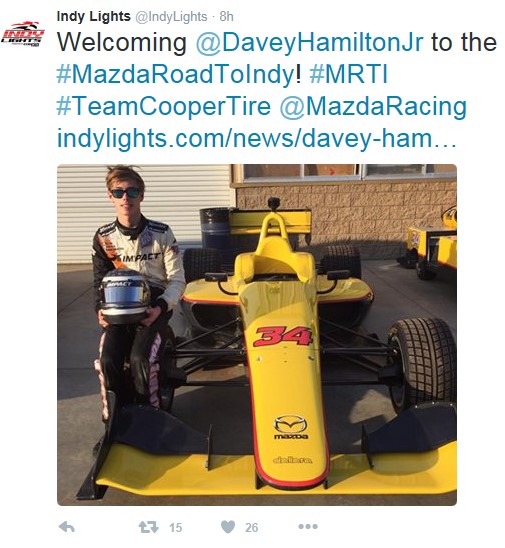 The third generation driver originally from Boise, Idaho, will be making his debut campaign in a single seater.

Hamilton hopes to follow in his father’s footsteps as the latest American racer to translate asphalt open wheel and sprint car success into a career in the Verizon IndyCar Series. Hamilton Jr.’s 2015 concluded with his fifth sprint car win of the year at Madera (Calif.) Speeedway in November en route to the King of the Wing Western Sprint Car Series championship.

His father Hamilton Sr. has competed in 11 Indianapolis 500s with a best finish of fourth. He also finished second in series points in back-to-back seasons in 1997 and 1998. He remarkably finished ninth in the 2007 edition of the Indianapolis 500 after a six year comeback from a devastating crash at Texas Motor Speedway.

“This opportunity with Jack McCormack is something I have been looking forward to for a long time," Hamilton Jr. said. “We are working hard to be on the grid in March to challenge for wins and ultimately an Indy Lights championship. We still have some work to do financially but we’re pushing hard."

McCormack Racing and Hamilton have spent much of the off-season testing, primarily at Buttonwillow Raceway in California. After several weeks practicing a third-generation Indy Lights car, Hamilton took controls of the current fourth-generation IL-15 for several test days. Hamilton and McCormack are planning a private oval test later this month before joining the series officially on Feb. 24 for the test on the one-mile oval at Phoenix Int’l Raceway.

The team has tentative agreements in place to compete in the entire Indy Lights schedule starting with the Streets of St. Petersburg, Fla., on March 11-13.