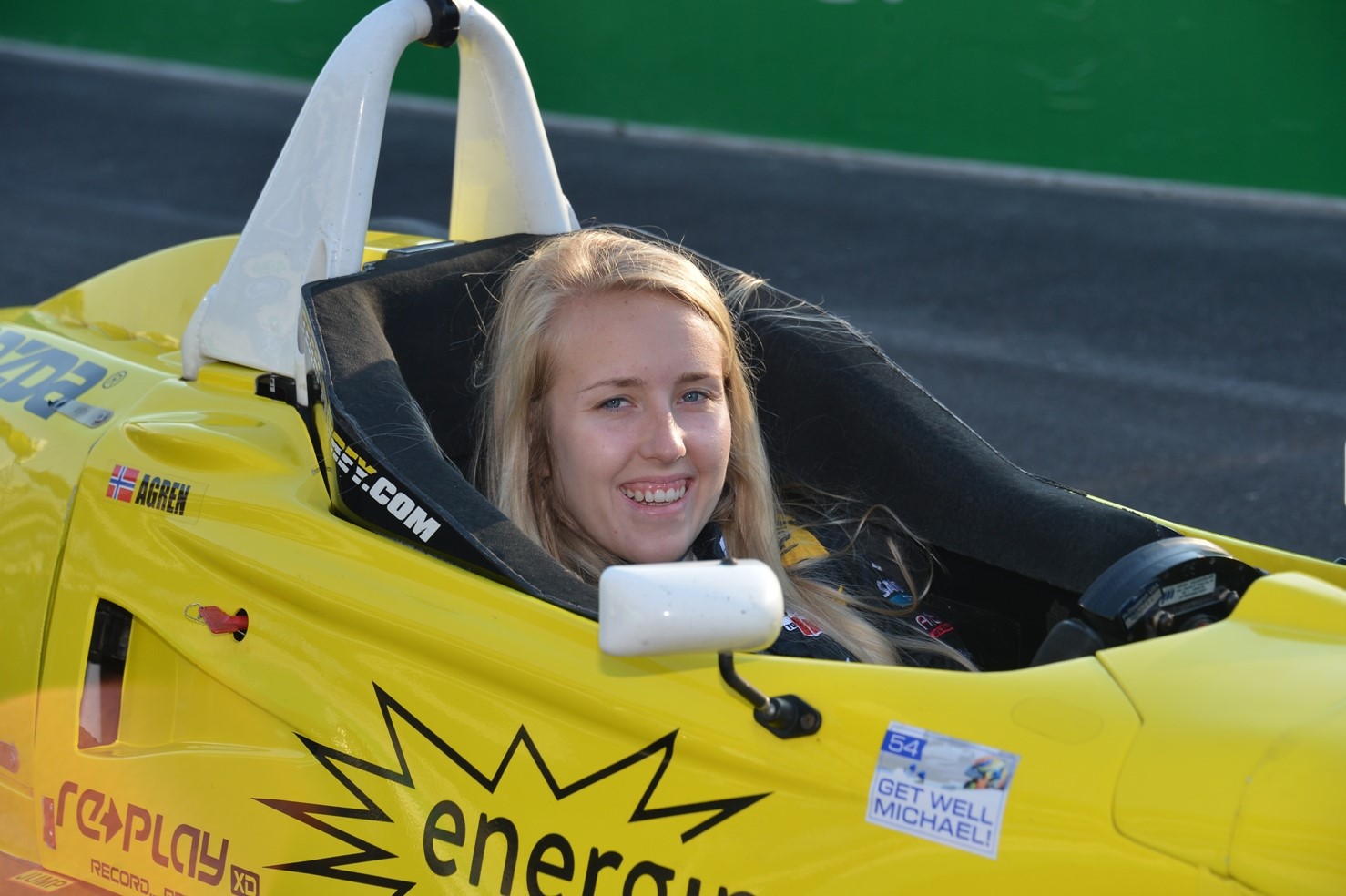 Ayla Agren's career could have gone in any number of directions given her family's passion for the open waters, but the young Norwegian rode the winds of change along a path of her own – once a surprise encounter led her to motorsports.

Agren's parents, who met at the world championships of windsurfing, had planned to take their two small children on a sailing trip around the world. But a change of plans led to a trip to the Nordic Karting Championships, where a chance encounter with a young, female karting driver changed the family's focus for good.

“During one of the qualification heats, there was a huge pileup," remembered Agren. “One of the drivers got injured and they took the driver's helmet off – and it was a girl. I thought it was so cool that a girl was competing against all the guys, so I told my parents I wanted to do it. Once I started karting, we traveled much more by land than by water!"

Once Agren started karting, there was no stopping the youngster from BÃ¦rum, a suburb of Oslo.

“I drove at three different tracks: Monday, Wednesday, and Saturday at one track, Tuesday and Thursday at a different one, then Sunday at another. I had a schedule printed out listing which track on which day. It started getting more serious when I was 11 and 12 years old. I had to make the decision whether this was something I really wanted to focus on or if I wanted to do other things as well. My racing became more strategic, from practices to which races we attended."

Agren moved up through the karting ranks, first in Norwegian mini-karts, then juniors, then the senior circuit across Europe. Her success led to the decision that set her on the path to her ultimate dream: the Verizon IndyCar Series.

“2011 was the year I had to decide if I wanted to just race karts for fun and go to school, or really commit to getting into open-wheel cars and pursuing my dream. Since I'd always wanted to race in IndyCar, it was natural for us to contact Anders Krohn, who was a Norwegian driver we knew from go-karts who had moved to the U.S. He was very excited about the U.S. racing community and about how everything worked – especially the Mazda Road to Indy. I did a test, then the Skip Barber Shootout, and decided to race with Skip Barber."

Agren scored four podiums as she transitioned from karts to cars racing in the 2012 Skip Barber National Championship before moving up to the F1600 championship with Bryan Herta Autosport. The F1600 series brought more new experiences, including Agren's first time working with a team and an engineer, focusing on race car setup and using data to analyze performance.

The 2013 season also brought Agren recognition from the Women's Sports Foundation. Former WSF president and veteran racer Lyn St. James had created the Women in the Winners Circle, which awarded Agren a Project Podium grant to help advance her career. Agren continues to work with the foundation to help other young women achieve their dreams.

“To be a part of the foundation and to work with people who are so committed to helping girls be involved in sports has been great. They help girls grow up in sports, with travel and training funds, making it possible for girls to be more active and to follow their dreams. Before the last WSF salute in October, we had a leadership connection where retired athletes spoke about their involvement in sports. They spoke about how they've used what they learned in sports – leadership, teamwork – and how that translated to their business lives and their communication skills. There are so many similarities between sports and business and it was great to hear their experiences."

When Herta decided not to return to F1600 in 2014, the natural choice for Agren was Palmetto, Fla.-based Team Pelfrey, where Krohn acted as coach for the team's four drivers. Agren reinforced her racing credentials as she took the series championship after a season-long battle with teammate Garth Rickards. In fact, Agren credits Rickards for the push that gave her that final drive to win the title.

“I would not have won that championship without Garth pushing me the entire way. We were such good friends off the track but battling hard on the track. We realized very quickly that our driving styles were so completely different that we could really learn from each other. So instead of competing against each other, we helped each other as much as we could so we learned much more than we would have if we'd kept to ourselves."

The team and its drivers turned their focus to the Mazda Road to Indy in 2015, with Agren, Rickards, Lastochkin and the Pelfrey team moving up to USF2000. Joining the trio was Skip Barber Shootout winner – and Mazda scholarship recipient – Luke Gabin. The rookie quartet all finished in the top 10 in the final standings, with Agren taking ninth position in what the team considered to be a “learning year."

For Agren, it wasn't just the opportunity to drive a car with downforce that made 2015 such a great learning experience: just as important was the chance to get to know the IndyCar drivers, gaining valuable knowledge from the men and women driving the race cars Agren herself hopes to be racing in a few short years.

“The whole atmosphere is more serious and more structured, since you're under the Mazda Road to Indy and IndyCar. It's a great experience to be a part of the IndyCar race weekends, to work alongside the series you want to be racing in in a couple years. I've gotten to know so many of the IndyCar drivers as friends. It's great to have that access and to be that close to the IndyCar paddock. If you have questions, they'll be more than happy to answer them. They can answer questions about sponsorship or driving styles, whatever it is. It's very unique to be able to do that."

As 2015 comes to a close, Agren is home in Norway working hard on her 2016 season, with IndyCar still her ultimate goal.

“We're working on our 2016 plans but my goal is to be back in USF2000. I can apply the lessons learned from last year and hopefully have another 2014 season all over again!"