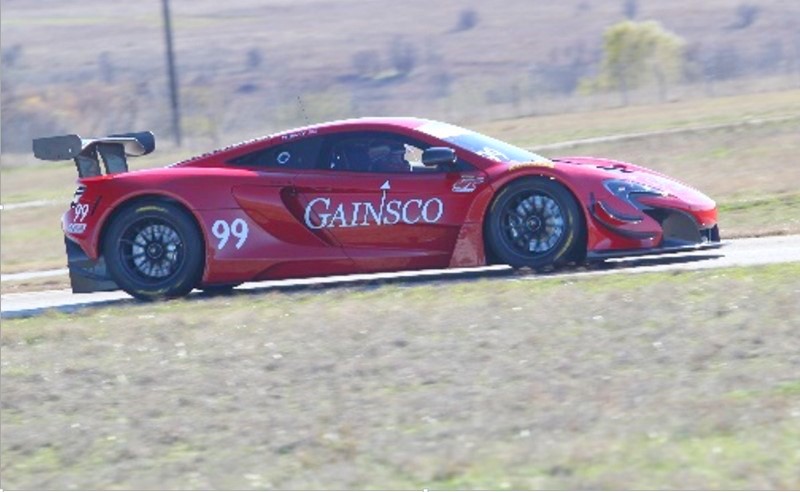 Dallas, Texas – GAINSCO/Bob Stallings Racing turned their first laps in the new Red Dragon when they completed a shakedown at the Motorsports Ranch in Cresson, Texas, outside of Dallas on Thursday. The two-time championship winning sports car team recently announced their change to the GT Category in the 2016 Pirelli World Challenge where they will enter a McLaren 650S GT3.

"It was an exciting day for us," said team manager, Terry Wilbert. "The McLaren GT group have been great to work with. Their Engineer spent a day in the shop teaching us the systems and then for the shakedown at Motorsports Ranch." He continued, "The car is awesome, it ran flawlessly and it was an educational day for our crew, learning the ins-and-outs of this incredible car."

Team owner Bob Stallings is a former SCCA champion. He competed in the No. 99 GAINSCO Auto Insurance Daytona Prototype before retiring and turning his wheel over to Jon Fogarty in 2006. Along with Race Engineer John Ward, Stallings is very active in the debriefing and engineering and development process of the race team. Fogarty encouraged Bob to turn laps in the new McLaren GT3 at the shakedown for reference.

Stallings obliged, and he completed eight laps and enthusiastically shared his impressions: "The McLaren GT3 is an exciting race car to drive. It's very balanced, it has lots of power and it's very stable under heavy braking. It is very similar to the Daytona Prototype in many ways, but it is more sophisticated and more comfortable to drive at speed. The paddle shifting was much smoother and more capable than I thought it would be, especially when downshifting under heavy braking. It was great fun and I know it will be a winner in Jon's capable hands."

After his first few laps in the new car, Fogarty echoed his boss's elation and he anticipates an exciting season ahead in the new Red Dragon, saying, "It feels like Christmas came early," said the two-time Sports Car champion. "Bob's right, it's a lot of fun to drive, very smooth, very fast and really stable. I can't wait to race it, I think we are in for an exciting season ahead…this Red Dragon has fire in its belly."

The team begins its testing and development program immediately after Christmas with tests scheduled at Sebring and Circuit of The Americas in Austin, the location of the 2016 season opener. For more information, please visit www.gainscoracing.com.