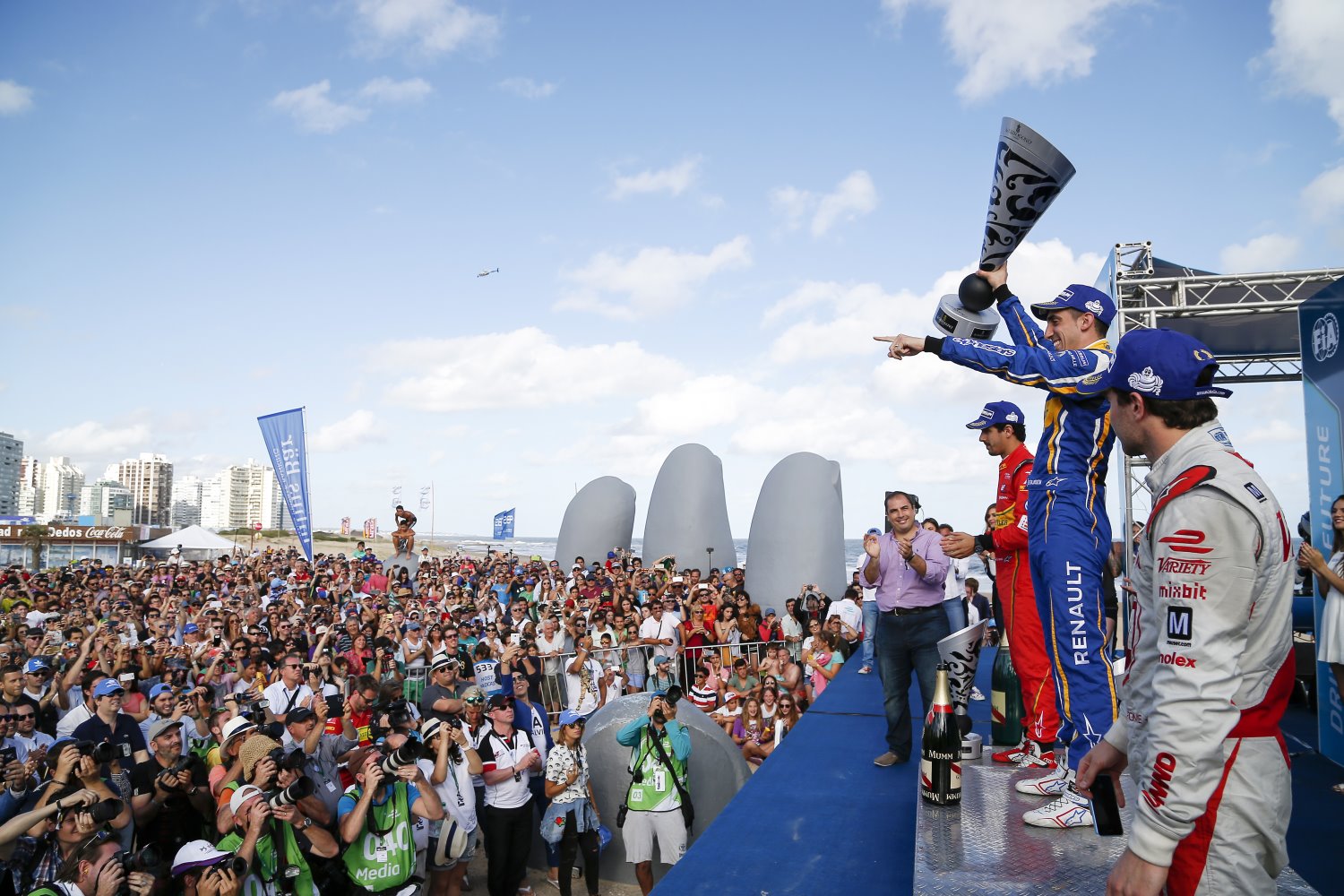 UPDATE You can find photos from this event on our home page here.

For the first time this season the Renault e.dams star failed to take pole position, but from fifth position on the grid he produced a charging drive to the delight of over 10,000 passionate Uruguayan fans to score his fifth career victory.

The seed was sewn at the start, and from the 'clean' right-hand side of the grid, he sprinted off the line to instantly take fourth place from Abt Schaeffler's Lucas di Grassi. The DS Virgin car of Sam Bird and the Dragon Racing entry of Loic Duval soon fell prey to the Swiss, and it was only a matter of time before pole-sitter Jerome D'Ambrosio (Dragon Racing) yielded as well.

The move for the lead was met with a huge cheer from the grandstands, and once ahead Buemi showed no signs of relinquishing his grasp on the winner's trophy.

Buemi said: "The start was really important for the outcome of the race. Pulling away from the clean side of the grid meant I could jump di Grassi and then close in and pass D'Ambrosio and Bird in the opening laps. I was ahead and lost a lot of time under Full Course Yellow. Normally you get a 10 second countdown from the race director but the boards were already out so I backed off, I didn't want to take the risk. It's good to bounce back from Putrajaya but Lucas is really close and consistent so we have to remain focused."

On the ‘dirty' side of the grid, di Grassi knew that keeping Buemi behind at the start would be a tough ask, and knew he had to try to keep pace with the eventual winner as he fought through the field. In his attempt to pass Duval he very nearly hit the wall and instead lost a place to his Abt Schaeffler team-mate Daniel Abt. A small error by Abt allowed di Grassi back through and he pushed hard to ensure he was as close as possible to Bird and Duval when they all came in for their mandatory car change.

A perfect pitstop meant he leapfrogged into second place and closed right in on Buemi as a Full Course Yellow was thrown after a Battery Management System error caused Bird's car to stop on track. Di Grassi gave everything to put Buemi under pressure, but couldn't get close enough to force a move or a mistake and settled for second.

Di Grassi said: "Today second was the maximum we could achieve with Renault again showing they have the car to beat. Also this result is thanks to my team who did a really good job in the pitstop where I moved ahead of both Dragon cars. I managed to catch Buemi and tried to manage the gap but he was too fast, they have been the quickest in the first three races. He's the man to win the championship but if he doesn't do it we'll be here to do it."

From his first-ever Formula E pole, D'Ambrosio made a perfect start and comfortably led from Bird, who beat Duval off the line to slot into second. A few tenths at a time, D'Ambrosio eked out the lead, but as soon as Buemi made it into second his advantage was decimated – Buemi lapping a full 1.5s faster than the Dragon Racing star in his first lap in clean air.

An overly-cautious entry into the pits gave di Grassi the chance to steal second place, and in the closing stages D'Ambrosio was once again in a fraught battle with his team-mate Loic Duval. D'Ambrosio held on for third, and with Duval fourth it was another strong race for Jay Penske's team.

D'Ambrosio said: "Getting both Dragon cars in the top-five was a good achievement. Starting from pole you want to win the race but realistically the other cars are faster. I just did my own race. Loic and I had a close one here as in Beijing, I didn't have much energy left and was in a close fight. I was under pressure but managed to hold on."

Just over six second covered the top four, but there was a huge gap back to fifth place and Renault e.dams's Nico Prost. Sixth place went to Team Aguri's Antonio Felix da Costa, easily the lead season one tech runner and he felt it was genuinely the best result possible in the circumstances.

Jacques Villeneuve was unable to take the start after seriously damaging one of his Venturi chassis in a qualifying shunt. Jean-Eric Vergne used FanBoost to make his way by the Venturi of Stephane Sarrazin and into the top-10. He gained a place when Oliver Turvey was penalized for his NEXTEV TCR team releasing him too early from his pitstop, and set to work on battling with Turvey's team-mate Nelson Piquet Jr.

Coming onto the final lap the pair traded places and paint, but Piquet remained ahead. However, he lost rear grip on the entry to the chicane and slammed sideways into the tire barrier. Vergne was elevated to seventh, while Piquet was unhurt but out.

Daniel Abt was eighth, Sarrazin ninth, while Robin Frijns, whose Andretti team changed the entire powertrain (including battery) in his second car in between qualifying and the race, rewarded their efforts with the final point in 10th.

With a beach party following on from the amazing podium ceremony at the famous hand, there was a fantastic ‘end of year' feeling about the whole event. There's now 48 days until Formula E returns to South America for the Buenos Aires ePrix. Last year it was arguably the most exciting event of the season, and Buemi's rivals will be hoping that he doesn't have things his own way.