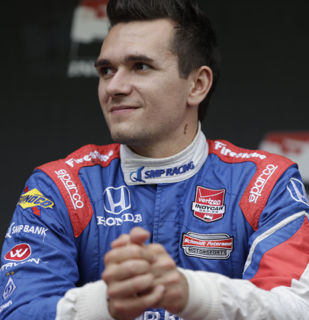 The 28-year-old, Russian driver competed with SPM for the full 2014 season and ran in a third car for SPM for the 2015 season finale at Sonoma Raceway, earning an impressive tenth-place finish. He will make his return piloting the No. 7 SMP Racing Honda Indy car.

"I'm very happy about the agreement between Schmidt Peterson Motorsports and the SMP Racing Russian driver development program," said Aleshin. "I had an unbelievable experience with IndyCar in 2014 and I can't wait to be back in this great series. I'm very motivated and one hundred percent ready to win."

Aleshin, the first Russian driver to race in the Verizon IndyCar Series, spent the 2015 season competing for SMP Racing in the European LeMans Series (ELMS) and the final race of the FIA World Endurance Championship (WEC). Prior to his 2014 ride with SPM, he competed in the Formula Renault 3.5 Series, where he won the 2010 championship.

SPM team owner Sam Schmidt commented, "Ric and I are very pleased to have Mikhail back for a second season with SPM. He was extremely fast in 2014 and we think, given that year of experience and last year competing in ELMS, he will be able to contribute significantly to the program in 2016."

Piers Phillips, SPM's new General Manager added, "Having someone of Mikhail's ability and experience returning to the team for 2016 is a huge plus for us here at SPM. He has undoubted speed, and it is now our job to turn that speed into regular top-five results and a strong championship finish. Mikhail is someone who I have followed throughout his career in Europe. We are delighted to have him back in the SPM family and looking forward to a great 2016."

The 2016 Verizon IndyCar Series season is scheduled to begin in March, with tentative testing scheduled for December, January and February.