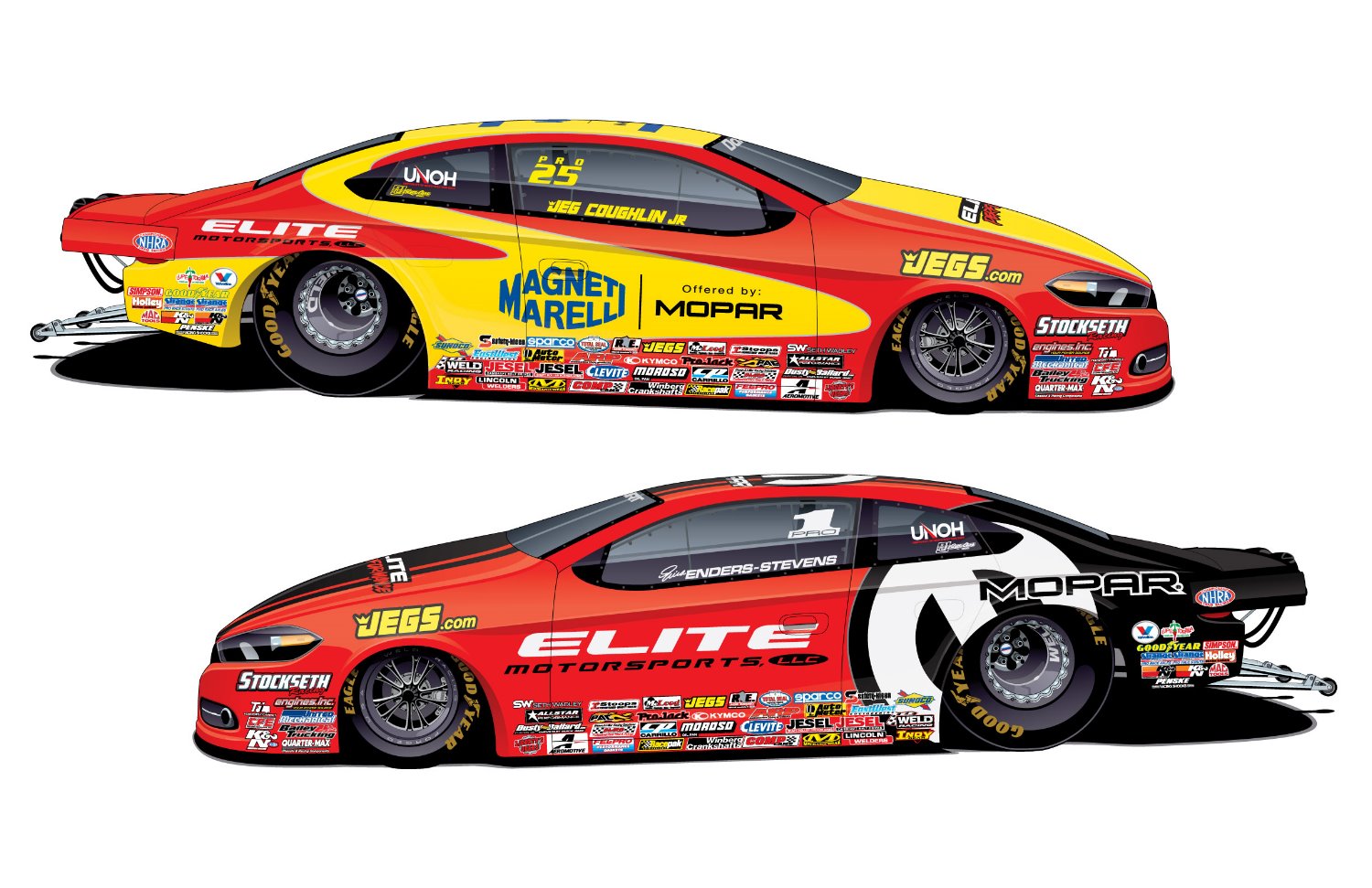 A pair of champions will team up and carry the Mopar banner in 2016, as back-to-back NHRA Pro Stock champ Erica Enders and five-time overall Pro Stock title winner Jeg Coughlin Jr. will lead the charge for the brand in the popular factory hot rod class. The combination of Elite Motorsports teammates Enders and Coughlin steering fuel-injected, HEMI-powered Dodge Dart cars puts winners of the past three NHRA Pro Stock World Championships under the Mopar banner.

In the NHRA Funny Car class, Mopar and Don Schumacher Racing (DSR) will extend one of the most successful and longest-running partnerships in the sport. Two-time NHRA Funny Car champion Matt Hagan will once again pilot the flagship Mopar Express Lane Dodge Charger R/T Funny Car.

"The Mopar brand is excited to announce that two proven champions, Erica Enders and Jeg Coughlin Jr., will fly the Mopar colors in the NHRA Pro Stock class next season," said Pietro Gorlier, Head of Parts and Service (Mopar), FCA – Global. "We couldn't ask for greater competitors or brand ambassadors to represent us at the drag strip. We're also very proud to once again partner with Don Schumacher Racing and work together to bring home a fourth NHRA Funny Car crown in six years."

Defending and two-time champ Enders, who competed in a Mopar-powered car in 2006-2007, will chase a third consecutive title behind the wheel of her new Mopar Performance Dodge Dart GT NHRA Pro Stock car for Elite Motorsports.

Enders didn't lose a step after breaking through for six wins and her first Pro Stock crown in 2014, stringing together one of the most impressive seasons in Pro Stock history with nine victories, 11 final-round appearances and six No. 1 qualifier spots on her road to the 2015 overall title.

The nine wins by Enders, a 32-year-old from Houston, Texas, who now lives in New Orleans with her husband, fellow Pro Stock driver Richie Stevens, broke the single-season mark of victories by a female racer, set by Angelle Sampey in 2001 with seven wins. Enders' total of 21 career victories ranks 39th on the NHRA all-time win list and just second among women, trailing only Sampey's 41 wins.

"We're entering a new era of Pro Stock and it's going to be awesome to take a new Mopar-powered Dodge Dart into 2016 and beyond," said Enders, who began her career at age 8 racing half-scale Junior Dragsters, with her childhood racing story featured in the 2003 Disney Channel movie Right on Track. "We won the last two championships with carburetors and now the goal is to win the first one with fuel injection. The Dart Pro Stock cars look awesome and I'm already very familiar with Mopar because I've driven for them in the past. It's an honor and a privilege to represent them moving forward, along with my teammate Jeg Coughlin Jr."

Teaming up with Enders in the new Pro Stock era of fuel injection and scoop-free hoods is a driver who has already placed himself among the legends of the sport and who is also no stranger to the Mopar brand. Coughlin clinched his most recent of five Pro Stock championships driving a Mopar-powered Dodge Dart in 2013.

Coughlin will man the "Magneti Marelli Offered by Mopar" Elite Motorsports Dodge Dart GT NHRA Pro Stock car in 2016, looking to add even more milestones to a Hall of Fame career that includes 76 victories, with 58 in Pro Stock, good enough for fourth all-time in the class.

"The 2016 season is a turning point for the NHRA and the Pro Stock class," said Coughlin, a Delaware, Ohio, native who raced a Mopar-powered Pro Stocker in 2005 and 2012-2014. "We're really looking forward to the upcoming challenges. We are fortunate to have great partners with Mopar and the Magneti Marelli brands, Elite Motorsports, JEGS and Stockseth Racing. It will be a great next chapter in our careers.

"Also, I am looking forward to working beside one of the greatest drivers in the NHRA, Erica Enders, and the greatest crew, including Rick and Rickie Jones, Mark Ingersoll and Brian ‘Lump' Self, all talented and championship-proven crew chiefs. It will be a great year for the entire Elite Motorsports team."

Mopar and Don Schumacher Racing Continue NHRA Funny Car Partnership
Mopar will continue to fuel its winning partnership in the NHRA Funny Car class with DSR, one of the elite teams in all motorsports, during the 2016 campaign. Don Schumacher first raced a Mopar-powered Funny Car more than 40 years ago, seizing five wins between 1970 and 1973, and began fielding Mopar-powered Funny Car machines in his role as team owner starting in 2003. In 2016, Matt Hagan will once again helm the Mopar Express Lane Dodge Charger R/T.

"We had our most successful season competing in Funny Cars in 2015, and much of the credit goes to Mopar and all of its engineers and technicians who developed the new 2015 Dodge Charger R/T Funny Car body that we used," said Schumacher, whose DSR organization has claimed 14 NHRA World Championships. "The aerodynamics and new Charger body combined with the power of the Mopar HEMI engine to produce the sport's quickest times and fastest speeds, and we couldn't be prouder to be partners with them."

Working in conjunction with DSR, Mopar debuted a new Dodge Charger R/T Funny Car body in 2015, and the results on the track were nothing less than spectacular. DSR teammates Hagan, Jack Beckman, Ron Capps and Tommy Johnson Jr. combined to place the new body in the final round at all but one of 24 events during the season, amass a total of 15 wins, and place all four Mopar cars in the top five of the standings, with only the overall Funny Car crown eluding the team's grasp. Beckman also doubled up with wins in the Traxxas Shootout bonus event and prestigious U.S. Nationals during Labor Day weekend.

Hagan raced his Mopar Express Lane Dodge to the winner's circle four times in 2015, adding two runner-up finishes and seizing four No.1 qualifier spots. The two-time NHRA Funny Car World Champion has posted all of the top-five speeds ever run by a Funny Car, and in August recorded the quickest run in Funny Car history at the NHRA Brainerd event.