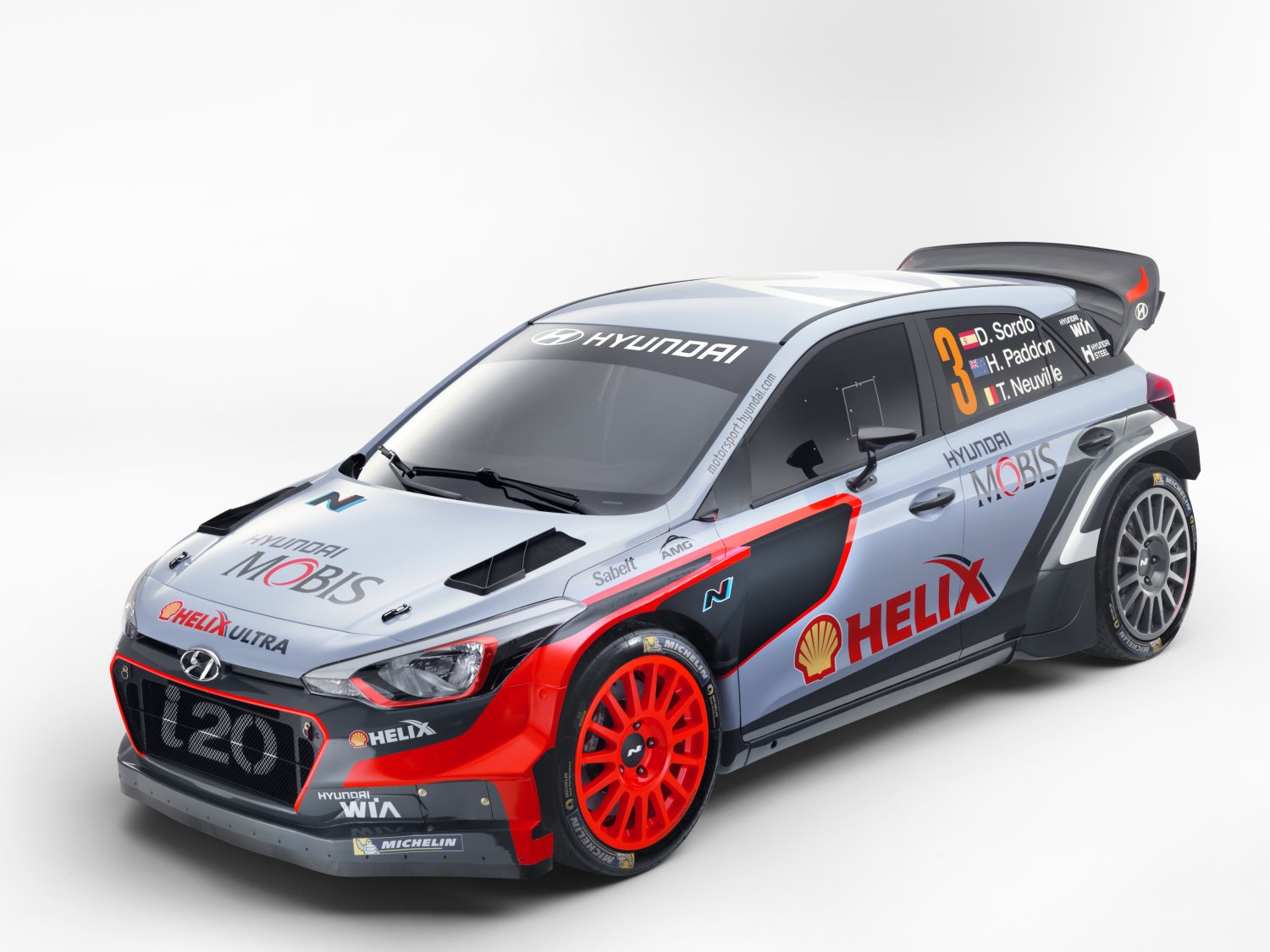 Hyundai Motorsport has kicked off the 2016 FIA World Rally Championship (WRC) by unveiling its brand new car, the New Generation i20 WRC, in front of 200 assembled media and guests at the team's factory in Alzenau, Germany today.

The presentation venue was particularly poignant and took place in the heart of what will be Hyundai Motorsport's customer racing headquarters as the birthplace of the company's upcoming R5 rally car, which is also based on the New Generation i20.

The formal reveal of the five-door New Generation i20 WRC marks the opening of an exciting new chapter in the short history of Hyundai Motorsport, building on two successful seasons in the competitive WRC environment. In that time, the team has undertaken a steep learning curve to establish itself as a genuine competitor against tough opposition.

Following its foundation-laying year in 2013, the team quickly developed a brand new WRC car from scratch for its first season of competition. The car proved to be both quick and reliable, securing a maiden win in Germany. From there, the team enjoyed a more consistent second season, scoring four podium finishes and fighting for second place in the Manufacturers' Championship right up to the season finale.

In early 2015, the team committed to a year-long test and development program for a WRC specification of the road-going New Generation i20, with its competitive debut set for Rallye Monte-Carlo 2016. The New Generation i20 WRC has already accumulated 8,000km of testing prior to today's launch, and has proven to be quicker than its predecessor, with the team's drivers also praising improved drivability.

The new car is the result of the Hyundai Motorsport's evolution since 2013 and although the team is still young, it is far more established in the WRC community. This growth is also reflected in the team's bolder ambitions for the 2016 season, namely to fight at the front in every stage and to mount a heightened Championship assault.

Team Principal Michel Nandan said: "It is a special moment for all of us at Hyundai Motorsport to reveal the New Generation i20 WRC to the world today in our own home. We are entering an exciting phase in our young team's journey, which I think will reinforce our commitment and ambition in the competitive WRC community. We have come a long way since our inaugural foundation year, and our performance in last season's Championship gave us renewed optimism for the future. The New Generation i20 WRC is the product of a full year of development and with a more experienced team of staff, we should now raise our objectives to be more confident to fight at the front. The competition remains strong and we know our manufacturer rivals will not ease in their pursuit for victory but we want to take the fight to them in 2016."

Hyundai Motorsport will field three cars in every round of the 2016 Championship, with Dani Sordo, Hayden Paddon and Thierry Neuville all confirmed for a full season of WRC. From Monte-Carlo in January to a new-look season finale in Australia, while also taking in a brand new event in China, the trio of drivers will share the #3, #4 and #20 cars during the season. The precise car-driver composition will differ from event to event, offering the team full flexibility in its Championship strategy. The team will begin its third season with two New Generation i20 WRCs and one previous model at Rallye Monte-Carlo before increasing to three identical cars from Rally Sweden.

Nandan continues: "We have worked with Dani, Hayden and Thierry for two seasons now, so it is a real benefit to us that we can continue our partnership with all of them into 2016 with the New Generation i20 WRC. They have all experienced the new car and given positive reviews, so I'm looking forward to seeing them on the stages this season. We have a strong pool of drivers with a range of experience and strengths. We will not constrain ourselves by fixing specific car line-ups at each rally, instead assembling the best composition for each event to maximize our Championship chances. All three drivers will contest all rounds, including the rally in China that will be new for everyone. They will have equal opportunities in the Drivers' Championship. We strongly believe that this is the best approach for us in our third season and we know the drivers will deliver to the best of their abilities in each rally. I'm convinced we have the most versatile driver line-up in WRC and we want to use that to our advantage."

Sordo said: "I'm very motivated and can't wait to start another season with Hyundai Motorsport behind the wheel of the New Generation i20 WRC. We had a reasonable season overall this year; we showed some good speed and set some promising times, although on a few rallies our final position didn't reflect our pace during the event. For sure we will keep working hard to show what we are capable of achieving. We will take our experience into 2016 aiming always to be fighting for top positions and, hopefully, battling for wins. I have a lot of faith in the New Generation i20 WRC, which is a car with a completely new philosophy compared to the one we've used up to now – better and faster, with a good engine and chassis. I believe 2016 will be a good year for me and for the team!"

Paddon said: "Everyone in the team is looking forward to an exciting 2016. With the combination of the new car and another year of experience under our belts, I am confident we can fight at the front – especially in the gravel events. 2016 is another step towards our ultimate goal and part of that process is winning our first rally. I'm excited about the New Generation i20 WRC. In the tests we have carried out so far, the car has been a big step up in all areas from the previous version, and it really suits my driving style better. While testing has been very positive, we never really know quite how we will stack up against the competition until we are on the stages – so in that regard we are all anxious to get the season started."

Neuville said: “I’m really looking forward to the new season – my third with Hyundai Motorsport. It will be like a fresh start for me as 2015 was a difficult year for me where I had some bad luck and made some mistakes. I come out of it stronger and more motivated than ever and I’m really eager to start the season with our New Generation i20 WRC. The objective for us will be always the same, to be as close as possible to the top and hopefully be able to fight for some victories along the season. I have a lot of confidence in the new car, it’s all new compared to the current version and I’m positive we will be closer to our main rivals."

All three drivers were present at today's launch, which revealed a revised livery for the five-door New Generation i20 WRC, as it was shown off in public for the first time. The team's title partners Shell and Mobis both stand out on the new car, and will continue to be named as part of the two team entries – Hyundai Shell World Rally Team and Hyundai Mobis World Rally Team – with the livery of the latter due to be revealed in early 2016.

The team has also retained the services of rising Dutch star Kevin Abbring, who will remain as Hyundai Motorsport Test Driver. Abbring will contest selected WRC rounds in a fourth car as part of his agreement, but his primary focus will be on managing development of the team's 2017 WRC car and R5 activities.

The R5 project, falling under the banner of Hyundai Motorsport's customer racing division, will roll out in the next few weeks. There will be a development phase during the first half of 2016, homologation of the car in mid-2016, and an opening to orders in the second part of the year.

Abbring commented: "It's going to be a very busy year with the 2017 WRC car to develop and the new R5. I'm very happy my work as test driver has been highly appreciated. We all work together very hard to achieve Hyundai Motorsport's goals and it's great to be part of it. For someone like me, with a limited amount of WRC experience, it's a great help to do as much testing as possible between events. R5 development will mean more driving this year and I can use my recent experience to make a better car. I've learned a lot in the rallies so far but on the other hand it has been hard to show my potential when only contesting some of the rounds. I'm really pleased by the trust the team has in me, and I'm really looking forward to what's coming!"

Hyundai Motorsport's immediate focus is on the opening rally in Monte-Carlo in January, where the fierce competition for 2016 will begin in earnest.