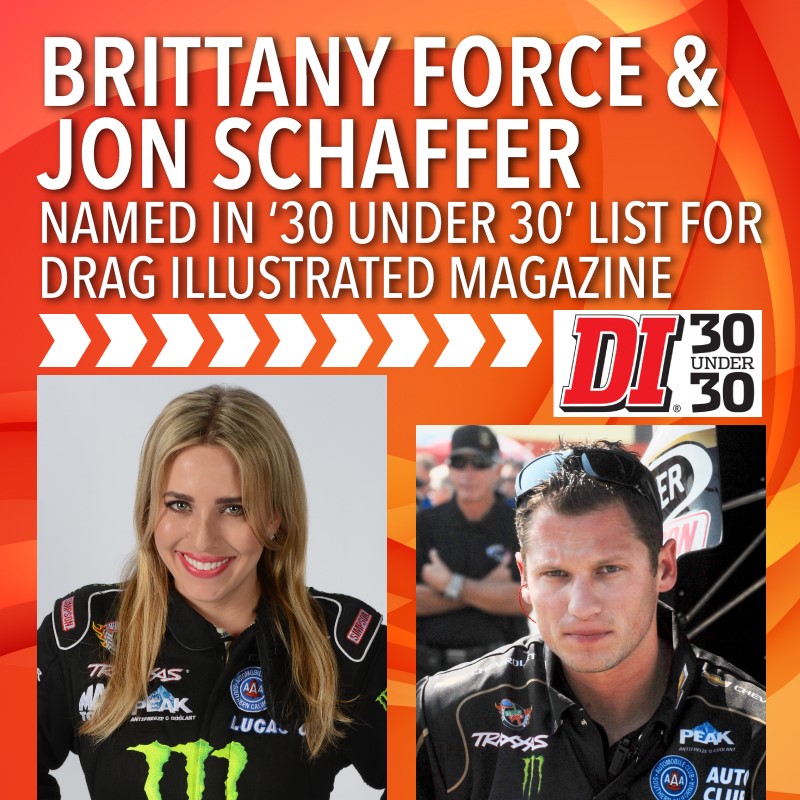 John Force Racing Top Fuel driver Brittany Force and Funny Car crew chief Jon Schaffer were announced yesterday as members of the inaugural Drag Illustrated magazine’s 30 under 30. The list celebrates some of the brightest young people in drag racing and its members are the subject of Drag Illustrated’s Tomorrow Issue, which will be released at the upcoming Performance Racing Industry (PRI) trade show in Indianapolis.

"It goes without question that up-and-coming drivers and tuners like Brittany Force and Jon Schaffer are amongst the most promising and talented young people the sport of drag racing has to offer," Drag Illustrated Editor-in-Chief Wes Buck said. "These are the people that will carry our sport into the future, and we’re proud to have them as our first-ever Drag Illustrated 30 Under 30 class."

Force wrapped up her third year behind the wheel of the Monster Energy Top Fuel dragster with her best performance to date. The 28 year-old resident of Yorba Linda, California raced to two final rounds, a No. 1 qualifier and was as high as No. 3 in the Top Fuel points during the 2015 Countdown before settling into the No. 7 position (a career best finish) to end the season. Force was also instrumental in securing her multi-year Monster Energy sponsorship along with her sister Courtney Force.

"It's such an honor to be mentioned in 30 under 30 recognizing my third season driving in Top Fuel. To be on a list with so many inspiring names and especially teammate Jon Schaffer proves John Force Racing has still got it. My team and I have worked incredible hard and had our strongest finish in 2015. It feels great our efforts over the past three seasons haven't gone unnoticed. The 30 Under 30 honor is something I am very proud of and only motivates me more going into next season," said Brittany Force.

"I am honored to be included on this list. I have had some great mentors and I want to thank all my crew guys and especially John Force for giving me the opportunity to be a crew chief at John Force Racing. I have spent a lot of time in the shop learning from some of the best people in this sport and I want to continue to work hard, win races and championships," said Jon Schaffer, crew chief of John Force’s PEAK Chevrolet Camaro.

"This has been one of the most exciting projects we’ve ever tackled," added Buck. "We set out to reward and celebrate the most talented and promising young people the sport of drag racing has to offer, and I could not possibly be more proud of this first-ever Drag Illustrated 30 Under 30 class. We know the hard work and dedication required to be successful in and around the highly-competitive world of drag racing and we want to make sure all these young guys and gals get the credit they deserve."