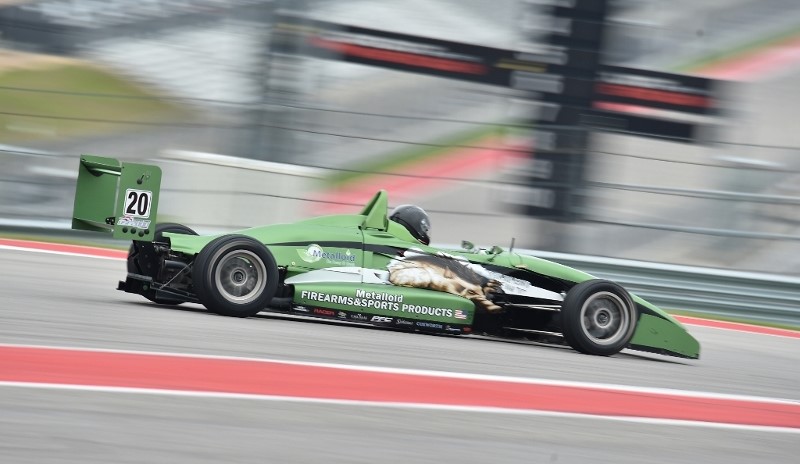 RJB Motorsports today confirmed it will field a two-car team in the 2016 Cooper Tires USF2000 Championship Powered by Mazda. The long-term commitment follows an exploratory USF2000 outing at the Mid-Ohio Sports Car Course in August and participation in the recent Chris Griffis Memorial Mazda Road to Indy Test at Circuit of The Americas.

Former pro hydro boat racer Ryan Barth established RJB Motorsports in 2011 when he made the switch toward four-wheel racing in the SCCA's Formula 600 category. He quickly formed a partnership with fellow F600 racers and brothers Fred and Tom Edwards, whose company, Metalloid Corporation, produces a range of environmentally friendly fluids to the metalworking industry. The association quickly led to the formation of the F600 Challenge Series, a cost-effective, entry-level championship featuring motorcycle engines and six-speed sequential transmissions, and more recently to a long-term goal of assisting talented young drivers via the proven Mazda Road to Indy Development ladder.

"After looking at all the different racing series we felt that USF2000 and the Mazda Road to Indy provided the best opportunity for us to make an impact on young racers," said Fred Edwards, CEO of Metalloid Corporation. "There is no other development ladder where someone can start at the lower levels, such as USF2000, and make it all the way up to the Verizon IndyCar Series. We have had several young competitors in the Formula 600 Challenge that have the talent to be in this series. Our team is new to USF2000 but we plan on giving our drivers cars that can win."

RJB acquired a pair of ex-Belardi Auto Racing Van Diemen-Mazdas earlier this summer and fielded them at Mid-Ohio for SCCA regulars Clint McMahan and Alex Mayer. McMahan, the 2014 F600 champion, also drove at the recent Chris Griffis Memorial test in Texas, sharing a car with USF2000 veteran Aaron Telitz, who posted the second fastest time during the Sunday morning session.

"We were grateful to Aaron for his time and commitment to our fledgling program," said Edwards. "He plans to move up the Mazda Road to Indy ladder to Pro Mazda in 2016 and we wish him well. His input was extremely valuable both to Clint and our team as we work toward finalizing our arrangements for next season."

McMahan, from Covington, Ga., will drive for the Sturgis, Mich.-based team in its inaugural USF2000 campaign.

"I am grateful to have the opportunity to drive in the Cooper Tires USF2000 Championship Powered by Mazda," said McMahan. "This opportunity will help me reach a lifelong dream of being able to compete with the best talent on the planet. I was very pleased to be chosen to represent the Formula 600 Challenge Presented by Metalloid and RJB Motorsports. I've had to go up against the top talent in the country on a club level to have this opportunity so needless to say I'm very excited."

The team's second driver will be announced in due course, and a full test program is being planned in advance of the first races of the 2016 season on the streets of St. Petersburg, Fla., in support of the Verizon IndyCar Series, on March 12-13.