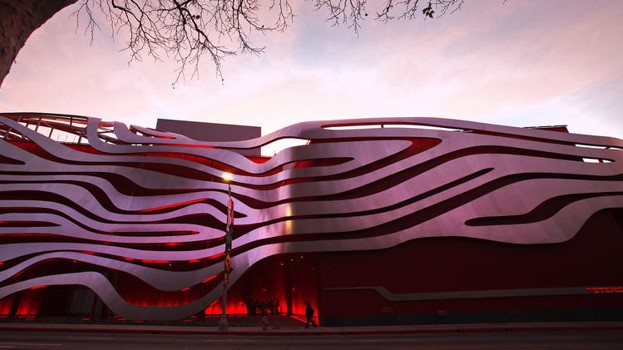 Oozing with opulence and a display of ultra-rare, all-silver collectible cars, the exhibit in the new Bruce Meyer Family Gallery at the entirely redesigned Petersen Automotive Museum is called "Precious Metal" for good reason.

It features three Pebble Beach Concours best of show winners, including a 1954 Ferrari 375 MM Scaglietti Coupe and a 1933 Duesenberg Model SJ Arlington Torpedo, both of which are displayed on pedestals like the art pieces they have come to be.

"Precious Metal" is one of 25 new exhibits that will open to the public Monday, but it's a title that could very well apply to the entirety of the new Petersen, which has undergone a 13-month radical transformation that has taken it from a dowdy and dated car display to a world-class automotive experience.

"Get ready," said renown Southern California car collector and Petersen board member Bruce A. Meyer. "I don't care where your expectation level is, we will exceed it. Guaranteed."

Standing at the entrance to L.A.'s museum row at Wilshire Boulevard and Fairfax Avenue, the Petersen is in the former Ohrbach's department store. It hasn't been updated since Hot Rod magazine publisher Bob Petersen founded it in 1994.

Since last November, when the museum closed for its $90 million-plus overhaul, drivers along one of L.A.'s busiest boulevards have marveled as the formerly charmless concrete building was transformed with undulating ribbons of red and raw steel wrapping around the structure to create an abstract impression of a car. Starting Monday, those drivers can finally park, walk in and stay for a while.

"Some people don't ‘get' the new design, and that's why everybody doesn't have the same kind of car or live in the same kind of house," Meyer said. "But one thing is for sure: Nobody is going to drive past this building and not know something's going on in there."

What's going on is nothing short of spectacular.

Inside, the 300,000-square-foot space has been thoroughly reimagined with a modern, airy, technologically sophisticated sensibility that separates its three main floors into distinct themes exploring the history, industry and artistry of the automobile.

Everywhere, there is eye candy, whether it's a multimillion-dollar 1935 Voisin Type C25 Aerodyne, a 170-foot wall of flat-screen TVs providing a cockpit view of a LeMans race at 245 mph, or Pixar, which created an interactive storytelling gallery specifically for the museum that uses the "Cars" character Mater to explain how vehicles work.

"We say it's for children," said Peter Mullin, an auto enthusiast, investment banker and philanthropist who took over as Petersen chairman in 2013 and spearheaded the museum's transformation. "The truth is, there will be as many adults in there trying to learn how cars work as the children."

Pixar's beloved character isn't the only voice visitors will recognize. Jay Leno has lent his vocal talents to many of the videos explaining the histories of the cars on view.

The experience begins on the third floor, which will display cars for the first time in the museum's 21-year history, thanks to a new car elevator. There are maps of early Los Angeles, explorations of Southern California's many race tracks and actual cars built by the dozens of now-defunct automakers that once thrived in the area, including a 1948 Davis Divan three-wheeler made in Van Nuys. That's in addition to cars that starred in Hollywood films such as the "Batman Returns" Batmobile and the "Breaking Bad" Pontiac Aztek.

"The key objective is to be a global illustration of where the world is going in transportation and not just where it's been," Mullin said. "The Petersen will have all the look-back as a way to learn where we've come from, but more importantly it will have the present and the future."

To that end, a new Propulsion Gallery on alternative power will include a 1914 Galt Gas Electric Hybrid, a 1966 General Motors Electrovan and a 2017 Toyota Mirai hydrogen fuel cell vehicle, as well as a steam engine.

ArtCenter College of Design, in Pasadena, also will give visitors a look into the future with a satellite campus operating from the center of the Petersen, where students will design and build cars using CAD software, full-scale clay models and storyboards.

"The public will be able to see the real design students of tomorrow working on real projects, not demonstrations," said Mullin, who donated $15 million to ArtCenter in 2013. "This is the real stuff they do as they get their degrees with the professors."

Other spaces bridging the past and present are the Chuck Wegner Gallery, which will debut with the exhibit "Race Cars for the Road," featuring a 1967 Ford GT40 Mark III alongside the new 2017 Ford GT. The Petersen will be the only place in the world a person can see the new Ford GT for its first year.

Visitors who want to race a GT – at least virtually – can do so through the new Forza Motorsport Racing Experience. The interactive display features eight driving simulators that let visitors play the racing game Forza 6, speeding exotic cars along world-class tracks from Laguna Seca to Nurburgring.

And if they want to see real race cars that have competed on those tracks, they can step into the Charles Nearburg Family Gallery, which is showing a 1926 Miller 91 Armacost Special, 1953 Lancia D24R and 1969 Porsche 917K Gulf Wyer, among others.

Many of the 130 or so vehicles on display for the Petersen's grand reopening are on loan from private collections, including those of many of its board members. The Nethercutt Collection in Sylmar, the Indianapolis Motor Speedway Museum in Indiana, the Henry Ford Museum in Michigan and the High Museum of Art in Georgia are among the many institutions that also loaned vehicles for exhibits that are expected to be updated every six to nine months.

The new Richard Varner Family Gallery will also take visitors on a walk through time and the evolution of performance on two wheels. Displayed on a long ramp, the kickoff exhibit features 17 motorcycles that demonstrate their history, from a 1903 Thor/Indian Camelback motorized bicycle and a bespoke 1922 Brough Superior SS80 Prototype to a 300-horsepower supercharged Kawasaki Ninja H2.

"Motorcycles have a unique place. They are a precursor to automobiles, and many automakers also have one foot in the production of motorcycles," said Richard Varner, a Costa Mesa businessman and motorcycle collector who is also a Petersen board member.

Varner is part of a core team of about 20 auto enthusiasts and industry and civic leaders who helped raise almost $125 million to update the Petersen. While the bulk of those funds were used to completely overhaul the museum's interior and exterior, $35 million will be set aside as an endowment to run the museum in the future.

Many of the primary donors also have naming rights for various museum spaces.

The Mullin Grand Salon will display 19 cars on pedestals as part of its "Rolling Sculpture" exhibit, the better to enable gawking of the 1953 Delahaye Type 178, 1936 Bugatti Type 57SC Atlantic and 1934 Voisin C27 Aerosport.

The William E. Connor Pavilion is the redesigned private party space. The stainless steel ribbons surrounding the museum's exterior arch over its landscaped rooftop and are lit with LEDs, providing an open area with a glowing ambiance and amazing city views.

The Armand Hammer Foundation Gallery, on the museum's first floor, will kick off with a display of BMW art cars painted by world-famous artists including David Hockney (who decorated the 1995 BMW 850CSi) and Alexander Calder (a 1975 BMW 3.0 CSL).

A bird's-eye view of the Hammer and Mullin galleries will be provided without even stepping foot inside the museum. A new Grand Concours, patterned after London's Burlington Arcade, is a glass hallway that takes visitors from the Petersen parking lot through the middle of the museum's ground floor as they walk through to Wilshire Boulevard. Those who'd like a bite to eat along the way will have that option at a new high-end Italian restaurant operated by famed local restaurateurs the Drago brothers.

Orchestrated by a veritable Who's Who of A-listers, the Petersen remodel began last fall with an exterior designed by Kohn Pedersen Fox Associates, a global architectural company that is also working on the redesign of the Museum of Modern Art in New York.

The Scenic Route, based in Pacoima, designed the Petersen's interior to serve as a crisp and modern complement to its eye-catching outside. The firm also designed the interior of Mullin's own Mullin Automotive Museum in Oxnard, which has drawn rave reviews since its opening in 2010.

The new Petersen, however, trumps it, having exceeded its goal to not only update the museum but elevate it to a must-see destination as the finest automobile museum in the country and among the top three in the world, the others being the Mercedes-Benz and Porsche museums in Stuttgart, Germany.

"I hate to sound cocky," Mullin said, "but I think we have achieved our objective. We're going to find out pretty quick when aficionados and collectors worldwide tell us what they think about it, but I would say we're there."