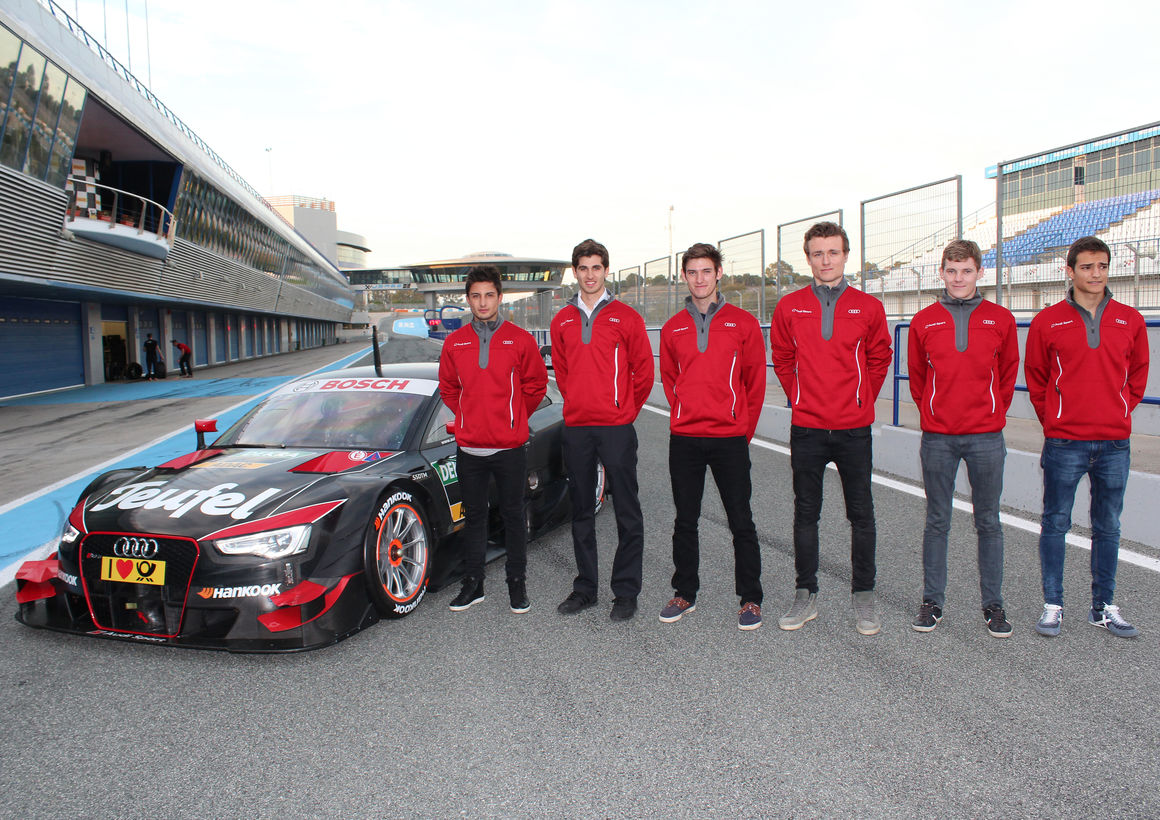 Ten victories in 18 races were celebrated by Audi Sport with the Audi RS 5 DTM in the 2015 season. At Jerez de la Frontera in southern Spain, six young international talents now had the opportunity to test the most successful DTM car of the year.

Half a day each with the Audi Sport test squad, some 300 kilometers at the wheel of the Audi RS 5 DTM, simulations of qualifying sessions and races, starting practice, plus the most successful Audi DTM driver of all time – Mattias Ekstrom – as a reference: Matthew Brabham (21/USA), Mitch Evans (21/New Zealand), Antonio Giovinazzi (21/Italy), Ben Hanley (30/Great Britain), Alex Palou (18/Spain) and Arthur Pic (24/France) received an opportunity many young race drivers dream of in Andalusia during the first week of December.

"The Young Driver Test has become a tradition at Audi Sport," says Dieter Gass, Head of DTM at Audi Sport, who was on-site to get a personal impression of the young drivers. "A number of our current factory drivers proved their prowess in these tests in the past. The young drivers' characters differ a lot from each other and it's always interesting to see how they tackle a task like this."

The two-time DTM Champion Mattias Ekstrom set a reference time at the wheel of the Audi RS 5 DTM on all three test days in optimal external conditions. In addition, Miguel Molina, who had previously been discovered at a 'Young Driver Test' himself and won his first DTM race this year, assisted the six youngsters with advice. The five-time Le Mans winner Emanuele Pirro intensively watched the tests as well. They were not primarily focused on pure lap times, but on the overall impression left by the young talents – and it was a generally positive one, despite major differences in experience of the six selected drivers.

Matthew Brabham (21): An American with roots in Australia

A 21-year-old American with Australian roots and a famous last name was the first to hit the track on Tuesday morning: Matthew Brabham. His father, Geoff, won the Le Mans 24 Hours in 1993 and his grandfather, Jack Brabham, was a three-time Formula One World Champion. The youngest member of the Brabham dynasty is endeavoring to get a foothold in the IndyCar Series, but is a great DTM fan as well. "I grew up with video games and the DTM was always one of the best series for me there," he says. "But in the 'real' DTM, racing is great and entertaining as well. I've been watching the races on television for years. For me, having the opportunity to drive one of these cars has made a dream come true. The Audi RS 5 DTM is really fantastic – not as unwieldy as you'd expect a touring car to be. It's been an outstanding experience for me."

Mitch Evans (21): A New Zealander from the Formula One environment

Next in line on Tuesday afternoon was Mitch Evans, the 2012 GP3 Champion and fifth in the GP2 Series this year. The 21-year-old New Zealander is a protege of former Formula One star Mark Webber and has already had an opportunity to test the current LMP1 Porsche. "Some of my friends are driving DTM by now. I've been watching the series on television and wanted to drive a car like that for once at all cost – preferably an Audi," the 'Kiwi' relates. "It's cool that it worked out. I don't have a lot of experience with a roof above my head and was surprised about how much downforce and grip the Audi RS 5 DTM generates. It's breathtaking to see how fast you can attack in the fast turns. Braking power is fantastic too." Up to now, the New Zealander has been focused on single-seater racing, but that does not have to remain this way: "My goal is to work together with a manufacturer. I hope that I've been able to impress Audi a little in this test."

Originally, Antonio Giovinazzi was scheduled to test on Wednesday afternoon. But because the Italian had received an invitation on short notice to participate in the GP2 test in Abu Dhabi that was held at the same time, he was allowed to take the wheel of the Audi RS 5 DTM earlier, on Wednesday morning. "The direct comparison between DTM and GP2 will probably be interesting," says the runner-up in the Formula 3 European Championship. In addition to two previously contested DTM races, this marked the third test with Audi Sport for Giovinazzi: "In spite of this, I'm still learning a lot of new things every time," says the 21-year-old Italian. "I'm very grateful to Audi for giving me another opportunity to test a DTM car. Driving these cars is really huge fun and I've been able to further refine my driving style. It's been an intensive morning, but I tremendously enjoyed it."

At the age of 30, Ben Hanley may no longer be regarded as a classic youngster. Still, the Briton made the biggest step of all the test participants on climbing into the cockpit of the Audi RS 5 DTM on Wednesday afternoon. Hanley won the FIA European Karting Championship this year. "Being able to test a DTM car has been a unique opportunity for me," says Hanley. "I concentrated on doing the best possible job and to make use of this chance." Hanley has achieved his most recent successes in karting, but has experience in various single-seater racing series as well. In addition, he has worked in the simulator. "I'm receptive to any form of motorsport. Motorsport is my passion," he says. "Obviously, I'd love to drive DTM. The races are very close and consistency is important. As a driver, you can still make a difference there."

Alex Palou arrived at Jerez with a broad grin on his face. The young Spaniard had won his first GP3 race held as part of the Formula One finale in Abu Dhabi last Sunday. Palou is regarded as one of Spain's greatest young talents and previously – then aged 17 – participated in Audi Sport's 'Young Driver Test' a year ago. "I was delighted to receive another invitation," says Palou. "Even though my goal is to race in Formula One, I'm happy that I was able to test the Audi RS 5 DTM a second time. The DTM is one of the best championships that exist in racing." Palou is a friend of Audi factory driver Miguel Molina. "Ever since Miguel has been driving in the DTM I've been watching the series – obviously even more intensively following my first test last year. I've watched every race ever since then and was upset that in the end the title didn't go to Audi."

Although he is only 24 years old, Arthur Pic has already been active in formula racing for nine years – most recently in the GP2 Series. The younger brother of Formula One driver Charles Pic was at the wheel of a touring car for the first time on Thursday afternoon at Jerez. "Obviously, not seeing the front wheels was unusual for me at first," says the Frenchman. "Vision is limited as well. I tried to make the best of this opportunity as I've been waiting for this chance for a long time." Pic has been interested in the DTM for quite a while. "I happened to watch a DTM test at Aragon a few years ago," Pic relates. "At that time, I said to myself: I'd like to drive that myself one day. I've been pursuing this goal ever since and following the DTM with great interest. It's fantastic that you can watch the races live on YouTube. The DTM is a tremendous series with really good drivers. If an opportunity to race in the DTM presented itself, I'd immediately grab it."