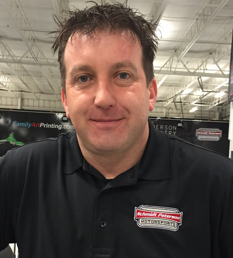 Phillips brings a wealth of racing experience to the SPM team. Most recently, the Northampton, United Kingdom native was Team Manager/Technical Director for Brabham Racing. Before that, his 15-year racing career included positions in both management and engineering, at Impact Engineering Solutions, Strakka Racing, SEAT Sport UK and Fred Goddard F3.

As General Manager at SPM, Phillips will oversee the entire operations of the team, while utilizing his experience to provide insight to the engineering and development departments.

"I am absolutely thrilled and honored to be joining such a top-level organization as SPM," said Phillips. "Having watched and admired the success of the team over the years as it has grown through Indy Lights and now into a top-level IndyCar team, and also having worked in other disciplines with some of SPM's drivers, I knew immediately that it was the place for me. I am excited about the journey ahead, and looking forward to working with all team members to bring much success to both the IndyCar and Indy Lights organizations."

SPM team owner Sam Schmidt commented, "Ric and I are quite pleased that we have been able to attract someone of the caliber and experience of Piers, without having to draw from within the IndyCar community. He has been involved in winning every major motorsports event with the exception of the Indy 500, so that will be first on our list. We have a fantastic group of team members who have shown we can win races and want to win the Championship. We have an expectation that this edition to the team will assist with this process."

The 2016 Verizon IndyCar Series season is tentatively scheduled to begin in March, with testing scheduled for February.