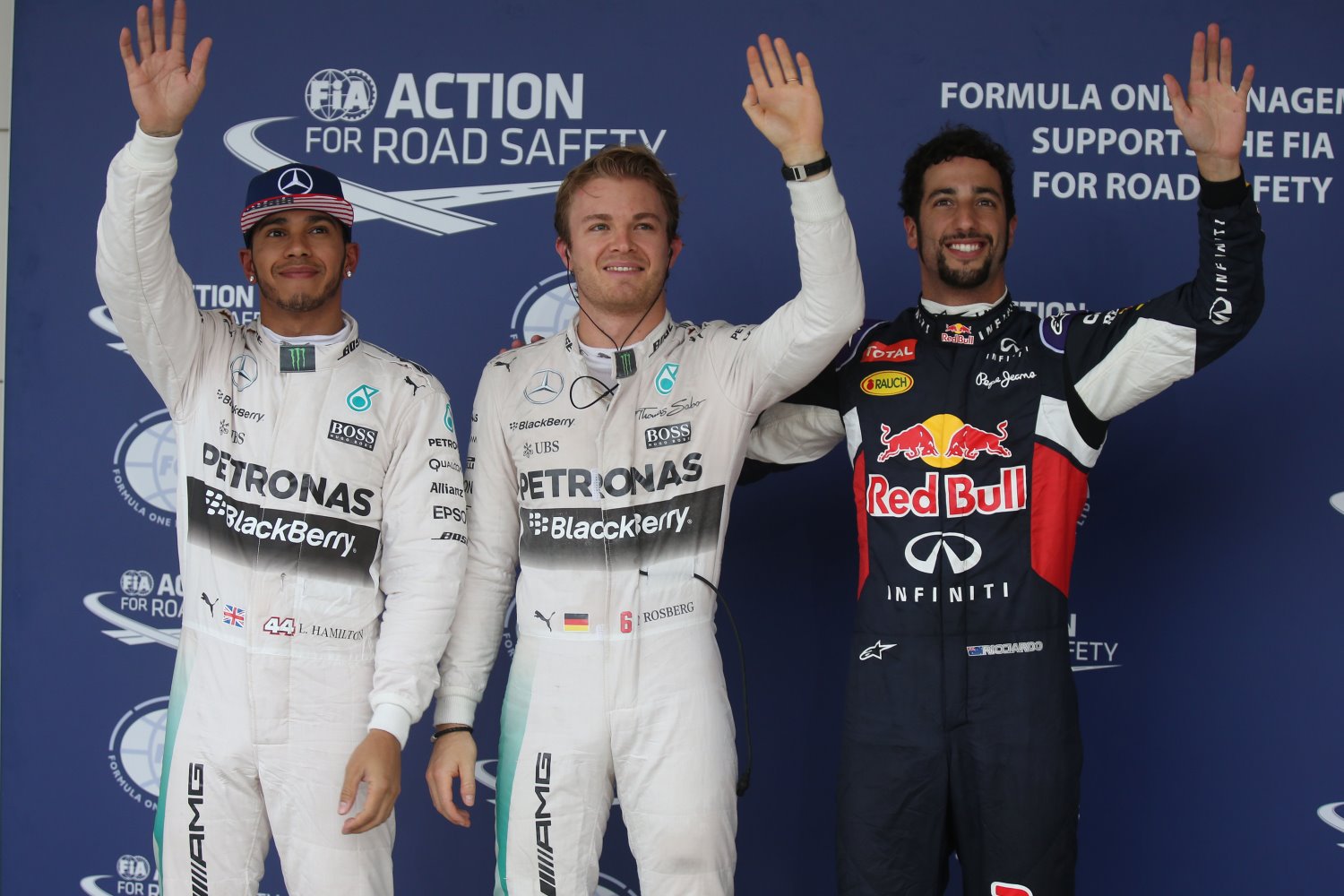 Q: Nico, difficult conditions to say the least, not just today but across the whole weekend, but really your first lap in that Q2 session was decisive, you must be quite pleased with the way this has turned out for you today?

Nico ROSBERG: Yeah, for sure, it's been a really good qualifying, I felt comfortable in the car. It's difficult out there with the aquaplaning and everything, because when it happens you just really struggle to have control over the car, because it just snaps suddenly, without warning. So that's been quite challenging out there. I got a good lap together and it was with a used set of tires, so that was even better, because for Q3 then I had a new set to go, so I was feeling really good.

Q: Timing was everything wasn't it Lewis really, I guess. Your first lap wasn't the perfect one for you; you had to build up to the time you eventually set?

Lewis HAMILTON: Yeah, it was generally a good qualifying. It was lots of fun out there I think for all of us. It was a bit of an anti-climax at the end, I was looking forward to going out. I think we probably could have gone out and cleaned the track ourselves, if all the cars were out. But anyway, still happy with the one-two for the team and good for the fans to be able to see the cars run. It seems like there is a big crowd there today so I hope the weather backs off a little bit for the race.

Q: Thanks for that. Daniel, Red Bull looks like it's performing well in these conditions as well, you were fastest in the first session. Did you think the pole might be on?

Daniel RICCIARDO: Q1 was looking good. Yeah, we were quite comfortable. Q2 there was a little bit more water on the track and it seemed like we struggled a little bit more compared to the Mercs and they found a bit more speed. But still, third is not too bad I think, it puts us in a good place for the race. A few faster cars are further back than maybe what they would be in dry conditions, so I think it's a good opportunity for us today to try and capitalize on it. Don't know what the weather's going to do but I think we're going to have a lot of fun in a few hours’ time.

Q: Thank you for that. Coming back to you Nico, what do you expect from this afternoon, what's your latest weather forecast, what kind of race do you think it's going to be and how badly do you want to win it?

Rosberg: Win, for sure, here badly and race – I've got no idea! It was supposed to be drying out from now onwards but it really doesn't look it out there, so who knows. But I'm feeling good in any condition at the moment and our car is great in any conditions, so full wets, intermediates, dry [tires], so whatever is fine really.

Q: Nico, in situations like that, how do you build confidence? Do you start out with confidence or do you have to build it from what you're getting back from the steering and the way the car moves? Just talk us through a little bit about that?

Rosberg: Yeah, you have to adapt all the time. The track is changing. There's a line coming into the track, into the water because people are going round and that makes it a bit more grippy then. So you have to adapt every lap and go for it and keep on finding the new limits. Then it becomes quite difficult once it starts raining more again, like it did, I don't remember when, in Q1 at the end or something, it started raining more? Not sure when that was, maybe Q2 even. Then that's tough, because you are still trying to improve your time and it's not so clear that the track is actually getting worse.

Q: Lewis, a lot of people were having issues with the top of Turn 10, I think at least half the field, if not three-quarters of the field went off there, had a spin of some sort. What was the issue there, why was that such a tricky part of the circuit, that downhill left-hander?

Hamilton: I'm not really quite sure to be honest.

Q: You had a spin there as well.

Hamilton: But it was just more wet there I guess than everywhere else.

Q: No more to it than that?

Hamilton: No, just aquaplaning I think for everyone.

Q: OK. A thought from you, Daniel, on the balance of risk and reward. That's what days like today are all really about. We saw one car in the barriers early on and just finding that line between risk and reward must be difficult.

Ricciardo: In these conditions, there's always a fine line but I think you're better off being on the more side of risk, I mean taking the risks. If you don't drive in these conditions with confidence I don't think you get very far. As soon as a little bit of aquaplaning or a bit more rain start to scare you or make you a bit more cautious then everyone's going to jump in front. So I'd definitely say you need to drive the conditions with some confidence and I'd say a little bit of aggression. Sure, it can bite you but it's a risk you need to take and it can really make or break [you] in these conditions. And obviously for us as a team and me as a driver you know I'm not fighting for a championship at the moment and these are conditions that do suit us this year how our car has been, it's an opportunity for us in the rain, so to put it all on the line makes sense.

Q: (Roy Bragg – San Antonio Express) How does rain change impact you in a positive way or maybe impact the other cars? Does it level the playing field for slower cars or cars that haven't been among the fastest?

Ricciardo: I think for us it helps us as a team. It helps us because I think the chassis works well. We have a good level of downforce and obviously the more rain, the less grip there is so I think the more downforce helps. So, probably the good cars might stand out a bit more in wet conditions. But on the contrary, the driver as I was talking about risk and reward, I think the driver, if he's willing to take the risks, if it pays off he can make a bigger difference. In the dry there's one line you follow and one technique – more or less – but in the wet you can improvise and do a few things differently. That's where it makes it more fun.

Q: (Adam Tate) Question for Lewis, we know in the past you've shown that it doesn't matter if you're on pole or not, so right now are you just concentrating on the long game later?

Hamilton: Well, I mean, qualifying was cut short so I guess we really didn't get to battle it out into the last few laps but yeah, qualifying is just the beginning. The race is obviously a long, long battle. It's going to be hard out there today with those conditions varying throughout the race. I think today it's still wise to be sensible out there. No need to take any particular risks. As I said, there's four races. It's not do-or-die this weekend.

Q: (Seff Harding – Xiro Xane Radio) Question for Daniel. With the strength of the Red Bull chassis in the rain are you hoping for it to be a likely mixed weather kind of race? You hoping for more wet, or more dry?

Ricciardo: I think mixed conditions would be good. I think a full dry race we're likely to be less competitive. I obviously don't want it to be too much rain that we don't run and we're behind the Safety Car for ten laps but yeah, a genuine wet race would be cool. I think it would make it a bit more exciting as well. There's always a few more variables that get thrown in, so wouldn't mind if it eased off a bit – but if we stay on wets then that's going to be good fun.

Q: (Christopher Joseph – Chicane) Question for Lewis. Watching yesterday and today, from a technique point of view there seemed to be a lot of controlled sliding and lot of delicate steering that kept things very, very straight. Is there a definitive technique that you're applying – and will you apply that today?

Hamilton: I think, as Daniel was saying, it's incredibly tricky out there and the conditions are always varying from corner to corner and lap by lap. So, you are, basically, on your tip-toes the whole time and of course you have to apply all these techniques that we've learnt through our early days of driving, in terms of finding the grip, in terms of being sharp and reacting to aquaplaning moments, which you just never expect. I mean you have to expect it's going to come but you don't know when it's going to happen. It's to the point of literally you're throwing the car into these corners and you have to catch it, and then catch the grip, and try and keep going without lifting.

Hamilton: It is. It is about being very, very sensitive but as smooth as you can be in those conditions.

Q: (Christian Menath) Question for Lewis and for Nico. Nico, you decided to run the old wet tires in the second qualifying session. Lewis, I think you decided to run new ones. Was that probably an advantage for you Nico at the end? And do you know if you have to start the race with the ten laps old tires?

Rosberg: For me it was still a compromise from the spin I had yesterday because I flat-spotted – a small flat-spot – so that compromised my qualifying a little bit and that meant I had to run used in Quali 2. It wasn't choice. The new tire is the better one – and that's what I having for Quali 3 again. I think there was more to be had from me in Quali 3.

Hamilton: I had fresh tires so I was using them when I could.