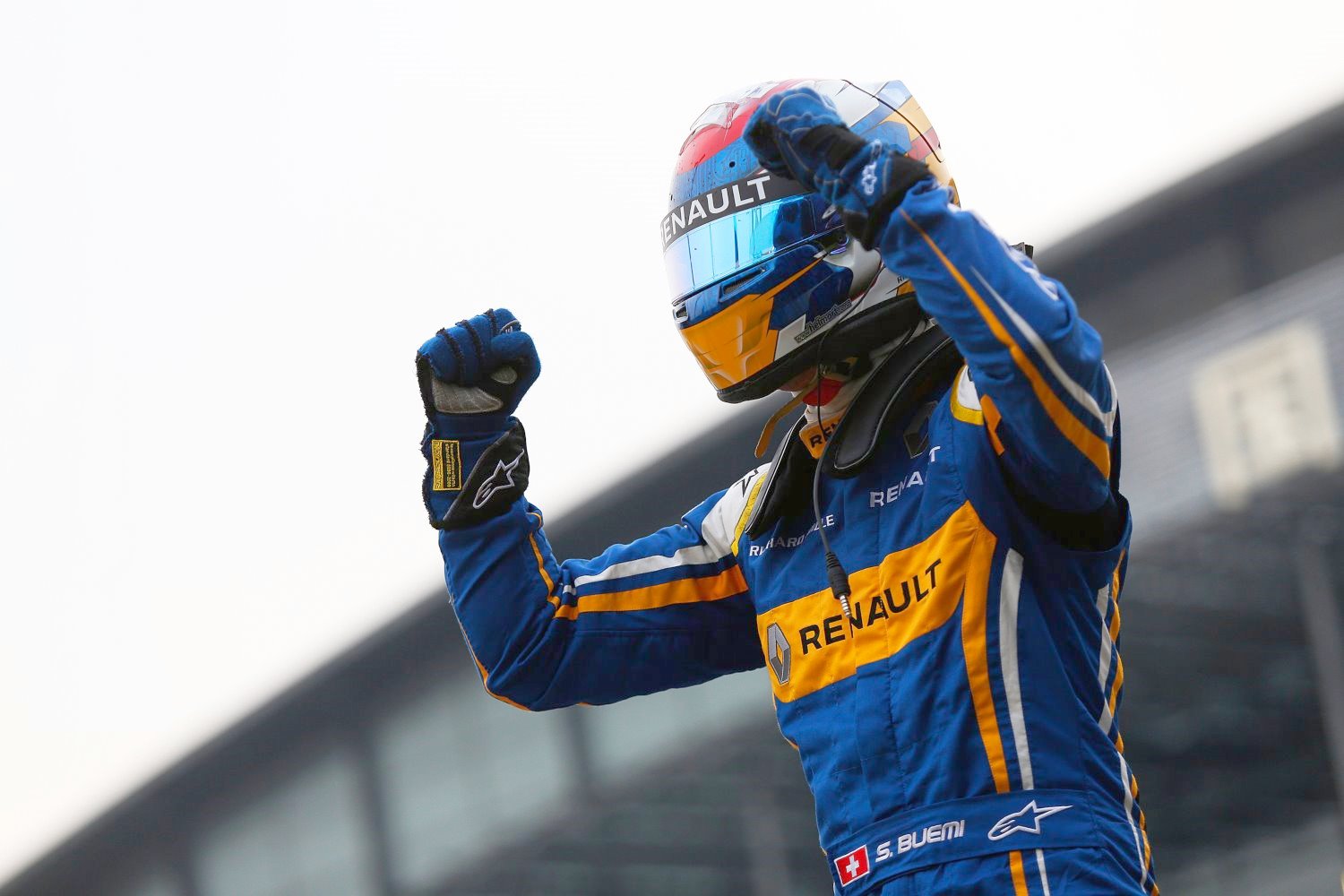 Sebastien Buemi started the second season of the FIA Formula E Championship in perfect fashion becoming the first driver to ever score the maximum possible points haul of 30 points.

After taking the Julius Baer Pole Position in the new Super Pole shoot-out, the Swiss ace then went on to dominate the SWUSP Beijing ePrix setting the Visa Fastest Lap in the process to complete a unique hat-trick.

"It was a good race. It's a bit of a weird feeling because I felt I was a little bit on my own, but I would not be against that. It's good to win with a bit of a margin.

"I'm happy, the team has done a great job and Renault has done a good powertrain so I'm just looking forward to the next races right now. I think we even managed to have the fastest lap, which was very difficult last year."

Buemi admitted he didn't make the best of starts, but he fended off the fast-starting Mahindra of Nick Heidfeld into the first corner to hold the lead. From there on after he dominated the race.

His ability to stretch his lead was stymied twice by the intervention of the Full Course Yellow. This caution system was making its Formula E debut and was given a thumbs up by the drivers.

Di Grassi said: "It's certainly good from a sporting side as it's safe and allows the track to be cleared fast and we also do it in other categories that myself and other drivers in this series race in."

Buemi didn't quite lead every lap, however. He was the first driver to pit for his mid-race car swap, which allowed Dragon Racing's Loic Duval to spend a lap at the head of the field before he too came in to change into his second car.

The pitstop process proved to be Heidfeld's undoing, and as the team struggled to get his belts fastened he lost places to di Grassi and to Renault e.dams Nico Prost. A fine opportunistic move took him back ahead of Prost, and the pair, who famously dueled for victory in season one only to end with a spectacular accident, once again went wheel-to-wheel around the Beijing Olympic Park circuit.

Prost eventually came out on top, but there would be no podium celebration again for the Frenchman. For reasons the team are yet to ascertain, the right-rear wheel guard fell off his car, breaking the rear wing support in the process. Although Prost was able to continue at race speed, the car was considered to be mechanically dangerous and he was shown the black and orange flag by the race officials. This forced him into the pits where he retired.

This promoted Heidfeld back into third place to score the first ever podium finish for the Mahindra team.

"I couldn't be more happy for the whole team, we worked hard over the summer and it was a very tight race. The guys behind me in the end did one lap more on the first stint so they had more power and I had to defend. It was really exciting, especially on the last lap and I at least managed not to crash on the last lap this time!"

During the closing laps there was a fantastic duel between Heidfeld and the Dragon Racing team-mates Duval and Jerome D'Ambrosio. There was less than two seconds covering them as they crossed the line.

Sixth place went to Oliver Turvey of NEXTEV TCR. The Brit was one of the three FanBoost winners along with Sam Bird and Nelson Piquet Jr. Despite starting back in 15th, Turvey drove a great race to work his way up the order to bag his best Formula E finish so far. Things were much tougher for Piquet, whose title defense started with a non-points score after his car developed a technical fault and dropped him from ninth to 15th.

Bird had an eventful race, dicing throughout on his way to an eventual seventh. Eighth place on his Formula E debut went to a delighted Nathanael Berthon for Team Aguri. Venturi's Stephane Sarrazin picked up ninth place after Daniel Abt was penalized for an unsafe release during the pitstops, while Robin Frijns bagged the final point on his debut for Andretti, despite having to coast over the line having run out of energy.

The new era of Formula E is here. The racing was as spectacular as ever and with 76,000 people attending the Olympic Park during the event there was a fantastic atmosphere. But Buemi's rivals will be hoping that his incredible start to the season can't stand the heat of Putrajaya, when Formula E returns on November 7.

Sebastien BuemABT's DaniAbt received a ten second timed penalty for a unsafe release after the race, and was dropped from ninth to 11th. We have updated he final results: