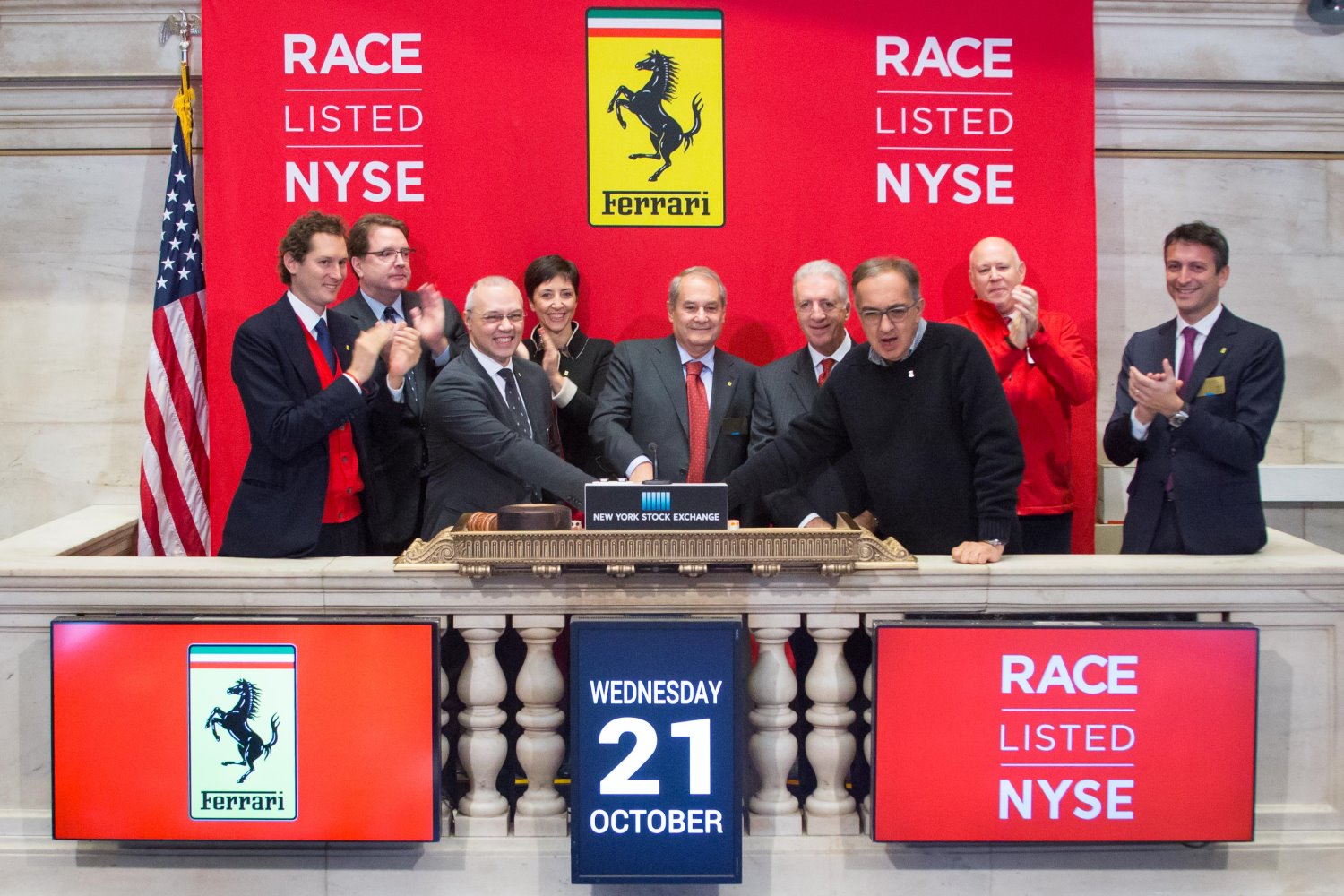 UPDATE Since opening on Wall Street earlier this week, the Ferrari stock price has traded in the $55 to $60 range. They announce their first earnings on October 28th. If the profits were good we could see a bump up in the stock price.

The share sale by parent Fiat Chrysler Automobiles came in at the high end of its predicted range, demonstrating substantial enthusiasm by investors and an endorsement of Fiat Chrysler chief executive Sergio Marchionne's plan to bring the legendary mark of the prancing horse to the US market.

Underwriters offered 17.2 million shares of Ferrari, comprising about nine percent of the company, according to banking sources. Fiat Chrysler had expected to price the offering at between $48 and $52 a share.

The shares are expected to begin trading Wednesday, under the ticker "RACE", with market watchers waiting to see how the company is greeted on the New York Stock Exchange.

The market's reception for IPOs has been somewhat meek in recent weeks, and analysts point out that demand for high-end luxury goods in a key growth market for Ferraris, China, has slowed down.

But the company was effusive about prospects for its six hyper-powered models in the IPO filing.

Ferrari shipped 7,255 new cars to its wealthy customers last year and the prospectus envisages only a gradual expansion to around 9,000 a year by 2019.

"We believe our cars are the epitome of performance, luxury and styling," it said.

"We intend to maintain and extend our leading position in the luxury performance sports car market and to continue to protect and enhance the value and exclusivity of the Ferrari brand and its association with the lifestyle we believe it represents."

The move comes one year after Italian giant Fiat sealed its takeover of the better-performing US automaker Chrysler in an ambitious, slow-moving merger engineered by Marchionne.

Weeks after that, the company said it would split off the hallowed Ferrari brand. The IPO is the first step in that direction.

As a unit of Fiat Chrysler, the supercar maker has been a cash generator. In 2104 it reported net revenues of 2.76 billion euros ($3.13 billion), and a net profit of 265 million euros.

Revenues grew seven percent a year between 2005 and 2014, and margins increased strongly over the same period.

Fiat Chrysler owns about 90 percent of Ferrari and, with a high debt level, could benefit from raising cash in the sale.

At the end of June, the carmaker had net debt of $10.8 billion due to a combination of the costs of the Chrysler takeover and ongoing loss making activities in Europe.

Now Fiat Chrysler plans to invest some $48 billion to expand its total worldwide sales to seven million vehicles per year, largely through the development of its Jeep, Alfa Romeo and Maserati brands.

Marchionne has been pushing the idea of another merger with a major brand — General Motors is his named target — in the belief that only more consolidation in the global auto industry will guarantee a company's survival.

Analysts say Marchionne, who is also chairman of Ferrari, has been astute in bringing a restricted number of shares to market — a strategy that mirrors Ferrari's own market approach of keeping production tight to preserve their exclusive cachet.

The flotation will not have any impact on Ferrari's involvement in Formula One racing, in which it is reemerging as a force after enduring a lean period in the slipstream of world champion Lewis Hamilton's Mercedes team.

Ferrari's status as the longest-established and most celebrated team in motor sport's elite championship is vital to the value of its brand.

It also accounts for more than 10 percent of its revenue through sponsorship and related commercial agreements, including licensing of the company's name and its famed logo in sportswear, watches, accessories, consumer electronics and theme parks.

The listing will leave Fiat Chrysler with 80-81 percent of Ferrari which the parent company intends to distribute to its own shareholders next year.

Piero Ferrari, a son of legendary founder Enzo Ferrari, will retain a ten percent stake after the flotation. ndtv.com