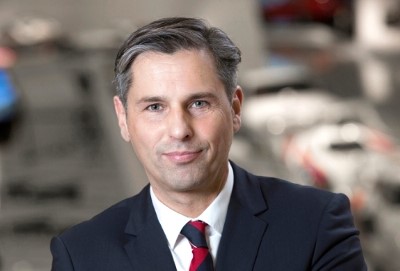 PCNA's current President and Chief Executive Officer, Detlev von Platen, will relocate from Atlanta to Porsche headquarters in Stuttgart, Germany to assume his new role as Executive Board member responsible for global Sales and Marketing, also effective November 1, 2015. He succeeds Bernhard Maier, who was appointed Chairman of the Board of Management for SKODA in the Czech Republic.

Mr. von Platen has led PCNA since 2008. Under his leadership North America remained the most important market for Porsche worldwide. New vehicle deliveries in the United States nearly doubled from 26,000 units in recession year 2008 to a record-setting 47,000 units in 2014. In 2009, he successfully introduced the Panamera sports sedan to the North American market, followed in 2014 by the equally successful Macan compact sports SUV. At the same time, Mr. von Platen significantly expanded Porsche's market presence in the United States.

In May of this year, PCNA opened its new $100 million Porsche Experience Center and headquarters in Atlanta, the largest investment ever for the sports car manufacturer outside Germany. The facility, an industry-first in North America, is complete with a driver development track and a state-of-the-art business center. A second Porsche Experience Center is due to open in Los Angeles in 2016. Numerous motorsport victories and the renowned Porsche Rennsport Reunion event, the most recent gathering attracting nearly 60,000 participants, solidified the brand among automotive enthusiasts across the world.

Mr. Zellmer was named head of Overseas and Emerging Markets earlier this year. He is currently responsible for Porsche subsidiaries in Australia, Japan and Korea, and the sports car manufacturer's regional offices in Asia-Pacific, South America, the Middle East and Africa. Previously, from 2010 until early 2015, he was Managing Director of Porsche Germany and grew sales from 13,000 units to 24,000 units in Porsche's home market.

"I have known Klaus Zellmer for many years and am very pleased to have a seasoned sales and marketing expert succeed me as head of Porsche Cars North America," said von Platen. "His track record and can-do attitude make him a perfect fit for our U.S. sales organization."

Mr. Zellmer studied Business Administration in Germany, Great Britain and the United States. He will report to Mr. von Platen. In turn, Mr. von Platen will be named Chairman of the Board of Directors Porsche Cars North America, Inc.