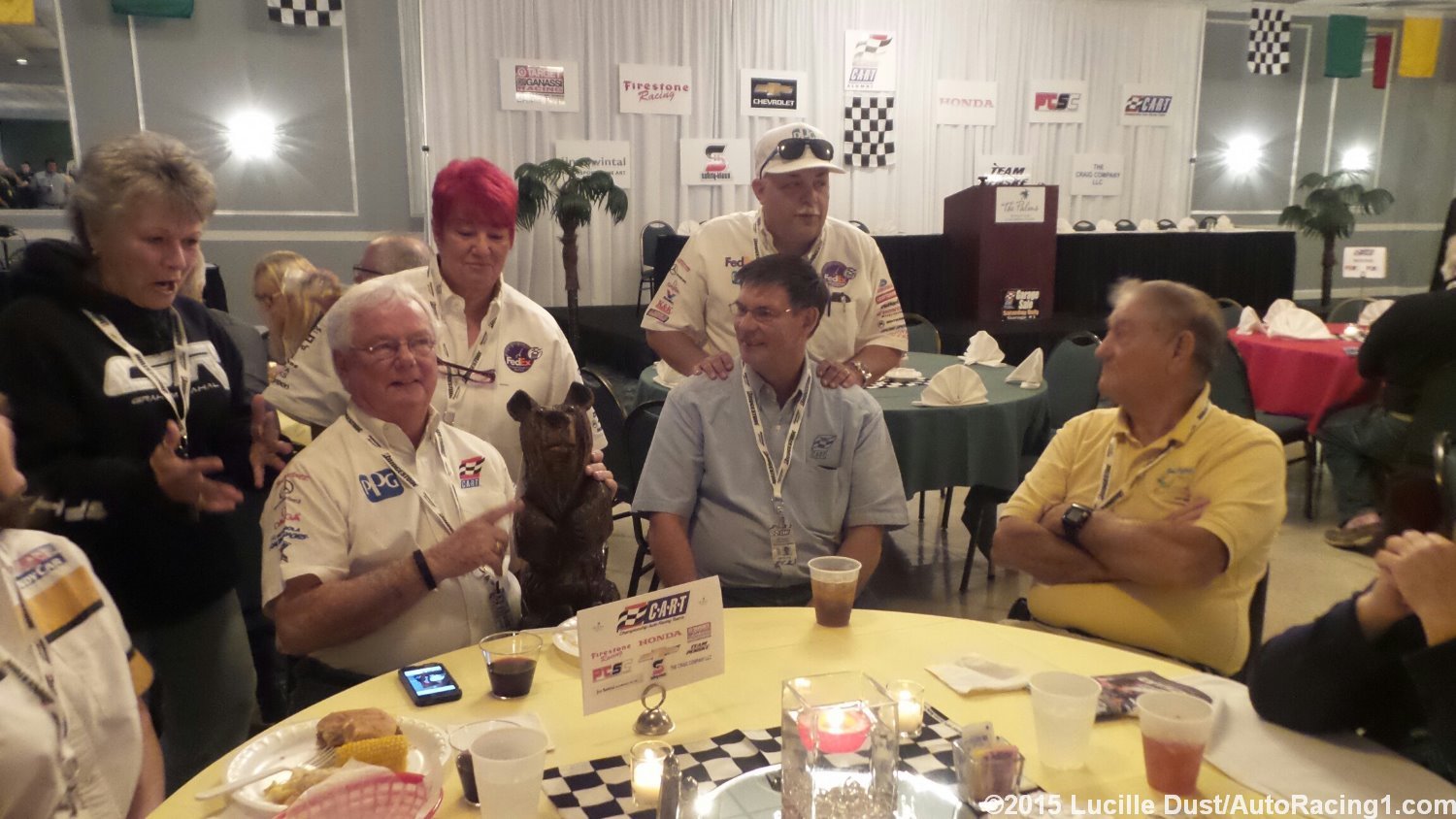 Saturday was a beautiful, sunny autumn day here in Indianapolis. Attendees for the CART reunion were given discount admissions to the Indianapolis Motor Speedway Museum and the bus tour around the track. Many took advantage of the offer, some who had not ever been to the museum and some that had not been there in quite a while.

The Saturday night dinner and awards ceremony was attended by 140 people. The room had several firsts for CART. U.E. Patrick, known to everyone as Pat, was the owner of Patrick Racing and was appointed President of CART when it was formed in 1978. Steve Edwards was the first Safety Director, asked by Roger Penske to form a safety team. VP of Logistics-Assistant Technical Director Billy Kamphausen and race official Bill Luchow had worked in USAC and were asked to work for CART.

Wally Dallenbach, a former driver, became the Chief Stewart for the new sanctioning body. Tom Bagley and Pancho Carter after were drivers in the series. Mario Andretti was captured on video, sending his regrets for not being in attendance. Father Phil also had a video message for the group.

Prints designed for each individual by Jim Swintal, were given to Dallenbach, Kamphausen and Luchow in appreciation for all their many years of service. Mike Hull, Jim McGee, Brian Barnard, Don Helms and Edwards talked about their fondest memories of the recipients.

The CART Alumni Foundation was announced by Paul Leyton. The purpose of the foundation will be to run an alumni event and make a small profit. That profit would be something to give back to the racing community. It could be for a racing charity, a racing family in need or for new equipment in the safety area. Something that would benefit the racing community as a whole. The foundation committee will select where the money will be sent to. Profits from this event will go to the Justin Wilson's Children Fund.

The CART Alumni committee put on a first class event for the first reunion. Everyone at the event was asked to complete a survey and comment on what future events should be. I am looking forward to the next event and having more people being there to share the memories from the CART days.

The mission was to have the opportunity to gather, recognize and honor members of the organization and to give back in a charitable fashion to the racing community, it's participants, officials and workers.

With the assistance of sponsors Honda, Chevrolet, Firestone Racing, Target Chip Ganassi Racing, Team Penske, Safety-Kleen, Performance Tire Service Company and The Craig Company LLC that idea came to fruition Friday and Saturday at the Palms Banquet and Conference Center in Plainfield, IL. About 100 attendees came to the traditional Friday Night BBQ, dressed in CART, Champ Car and IndyCar official shirts donning logos from sponsors such as FedEx and PPG for a first-class event celebrating the rich history of CART. All attendees received programs and a print created by Jim Swintal. A new logo for the group was unveiled as CART
Alumni.

There was a video presentation that ran most of the night comprised of 800 pictures taken at racetracks over the years. Many officials at the event could laugh at the shots of them working at various racetracks. The drivers, team members and owners in the presentation brought back fond memories of the past.

I talked with Wally Dallenbach Sr, instantly recognizable in his trademark brown hat. Dallenbach raced 180 Championship events from 1965-1979, winning 5 times. He joined the CART organization as the Competition Director in 1980 and became the Chief Steward in 1981. During his tenure, he improved the safety of the IndyCar and established nondenominational church services at the race tracks. He left this position in 2004.

"I did not think there was life after racing, but I was wrong. I was able to attend my sons' NASCAR races until he stopped driving. I don't have to be at the track by 6 am anymore, but I still get up at 5:30 am looking for my coffee."

After a fantastic dinner of hamburgers, hot dogs, barbecued chickens and other sides, the crowd mingled and reminisced about the former days and nights at the racetrack. We caught up with where people are living and what they are doing for work now.

There was a award presentation Saturday night which I will cover in a separate post. But overall a great time was had by all in celebrating the wonderful memories of yesteryear.

Lucille Dust reporting from Plainfield, In

10/09/15 Tonight is the CART reunion for Officials, volunteers, Media and Staff in Plainfield, IN, right on the edge of Indianapolis. The event tonight is based on the old Friday night Officials BBQ. Attendees were asked to wear their uniform from back in the day. I did not have an actual uniform, but am wearing my 2008 Champ Car Hard card which is a rare item since not many were printed that year and the few that were could only be used for the lone Champ Car race in Long Beach.

It is sure to be an exciting evening reliving cherished memories from a Golden Age. Exciting stories and pictures to follow….