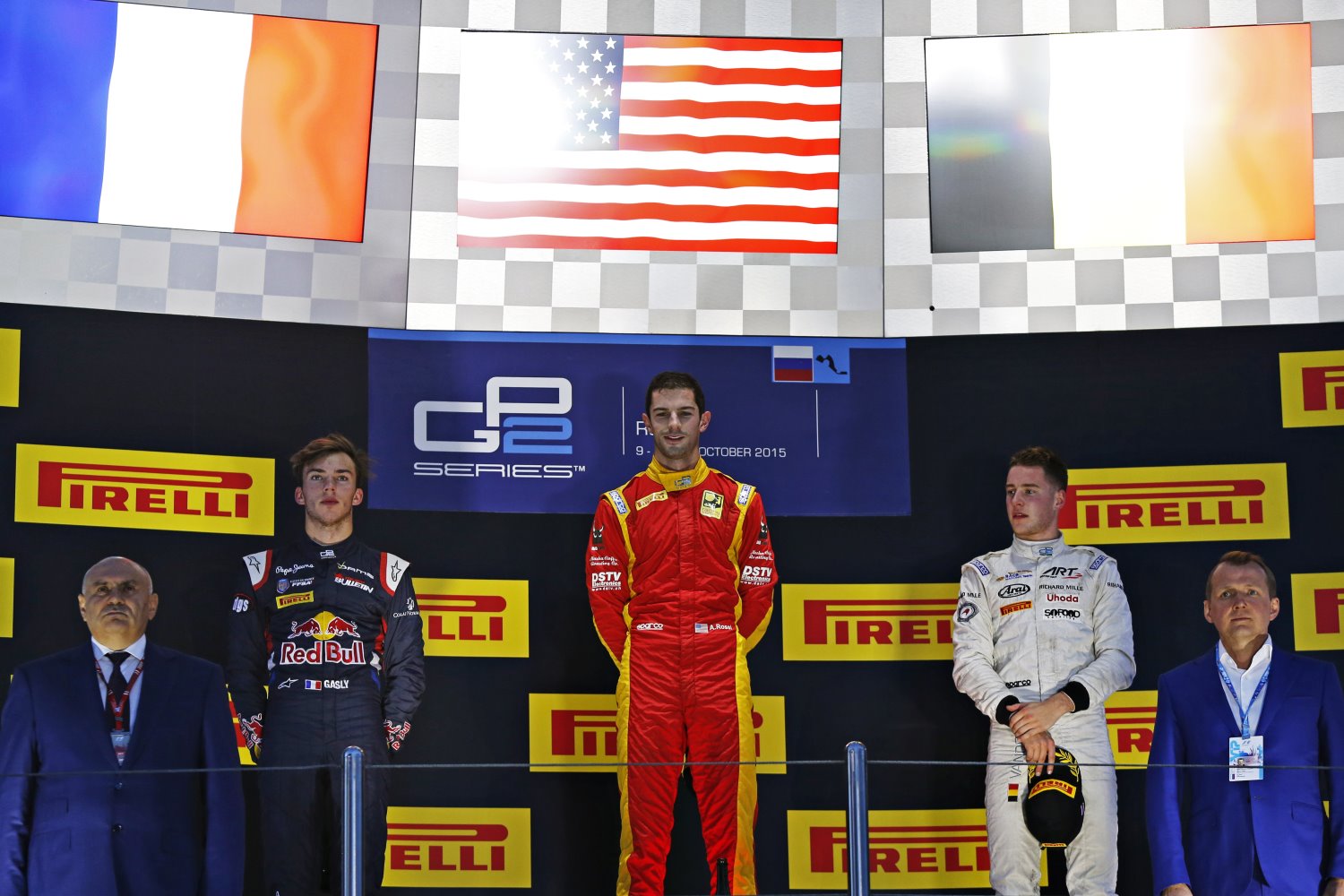 Alexander Rossi came out victorious in today’s eventful and shortened feature race at the Sochi Autodrom: the American whose goal was to finish ahead of Series leader Stoffel Vandoorne in order to keep his title hopes alive put in a skillful drive to win in spite of a red flag period and a tricky race strategy in only 15 laps. Frenchman Pierre Gasly split the fighting pair on the podium to take second place.

It all happened at the start: when the lights went out, polesitter Alex Lynn made a perfect getaway to keep the lead. Vandoorne was slow away from the front row and bogged down to fourth as Rossi flew past him and moved up to P2. The American had to defend his position from a charging Arthur Pic at Turn 1 whilst Vandoorne lost another position to Gasly.

There was chaos further down the pack: Artem Markelov went too wide at Turn 2 and touched the wall attempting to re-join the track. Having no control of his machine, he crashed into the barrier collecting Sergio Canamasas and Marlon Stockinger on the way. Jordan King who had made contact earlier with Stockinger at Turn 2 also crashed into the wall a corner later. The safety car came out, but the race was rapidly red flagged as all four men came out of their cars unharmed.

The field returned to the pitlane while the techpro barrier was fixed. But as the daylight decreased, the race distance was reduced to a total of 15 laps instead of 28 – meaning that at the re-start behind the safety car, the drivers had only 12 laps left to observe their mandatory pitstop. Lynn remained in control of the rest of the pack and built a 3s gap to Rossi and Pic whilst Gasly was under pressure from Vandoorne. The Briton from DAMS pitted on Lap 6 for Medium tires. His teammate did the same one lap later but this time to switch from option to prime. Rossi chose to stop on Lap 8 for Medium tires and re-joined the track on cold tires just a hairsbreadth ahead of Lynn who eased his way past the American.

Vandoorne who had been all over Pic, eventually got past him after the Frenchman made a small mistake and went too wide. The Belgian was then into the lead of the race but still had to pit. More drama came from Lynn who up until then looked like a sure bet for the win: the Briton ran too wide at Turn 14 and made contact with the barrier; effectively ending his race, and leaving Rossi as the net race leader.

Vandoorne pitted on lap 12 and re-joined behind the pair of Rossi and Gasly with just three laps to go. Trying to close in on the leaders, the ART driver made two small mistakes, enough to know that the win would not be his today. Still, he pushed hard on the final lap to clock in the best laptime of the day and add the bonus points to his tally.

When the checkered flag dropped, Rossi savored his third win of the season and breathed a sigh of relief knowing his title hopes were still alive. Gasly who had matched the American’s pace throughout the race had to settle for a strong second place ahead of Vandoorne. Sergey Sirotkin finished fourth from tenth on the grid ahead of Rio Haryanto, Raffaele Marciello, Richie Stanaway, Pic, newcomer Dean Stoneman and Nobuharu Matsushita.

Following the race, half points were issued: Rossi scored 12.5 points whilst Vandoorne added 7.5 points to his tally leaving a gap of 104 points between the pair, and giving the American no option other than to repeat today’s masterclass.