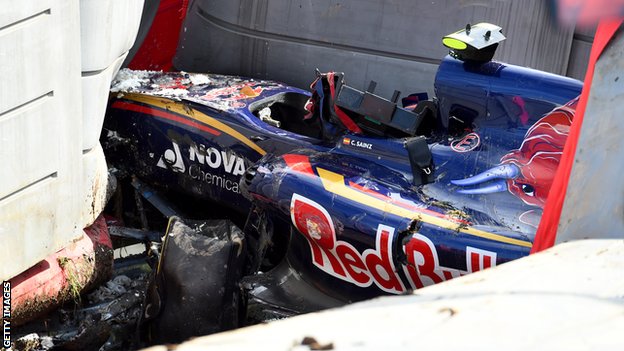 UPDATE Team Statement: Following Carlos Sainz's accident during FP3 today in Sochi, the driver is perfectly conscious and was able to talk to the extrication team. Once out of the car he was taken to the circuit Medical Centre, where he underwent an initial assessment of his condition.

He has now been taken by air ambulance to the Sochi Hospital 4.

Investigations on the reasons for the accident will take place once the car is back in the team's garage. Further information will be released by the team and the FIA to the media when it is available.

(GMM) Carlos Sainz's manager had good news about the condition of the Toro Rosso driver following a big crash at Sochi in Saturday practice.

The session was stopped during nervous moments in the final session before qualifying for the Russian grand prix, when images showed that the 21-year-old's car was buried deep under tec-pro barriers.

Sainz, however, gave the thumbs-up as he was put into an ambulance lying on a full-body brace and stretcher. It emerged later that he had been airlifted to hospital.

The GP3 race was also cancelled after the arm-co barrier behind the scattered tec-pro was shown to have been destroyed in the high-speed impact.