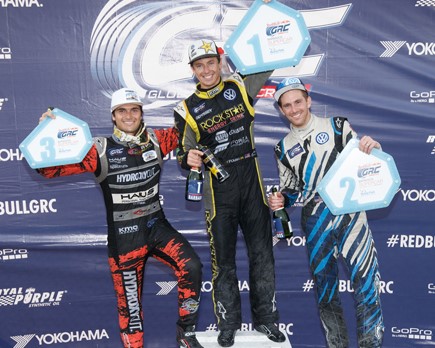 "Honestly, we were having trouble halfway through the day," Foust said of Saturday's action. "But we went back to work and we pulled out some time. The Andretti team took a car that we were worried about midway through the day and made it good. Somehow, that thing is tough enough to survive on three wheels – I have no idea how Scott finished with that!"

The last chance qualifier was halted by a spectacular rollover by incoming Supercar points leader Ken Block (TOP), who hit a dirt berm to lift onto two wheels and slid upside down to a halt on the jump. Block, who was unharmed in the incident, missed his second main event in the past three races and lost the championship lead. The team intends to compete in Sunday's action.

The main event started with Foust jumping out to the lead in the first corner, outracing his teammate Speed as Sandell claimed third. As the field battled heavily behind them, Sandell worked to make up ground before ducking into the Kobalt Tools Joker Lap on the final lap. Coming out, his car slammed into Speed's, launching the Beetle into the air and taking the left front wheel off. Sandell crossed the line second while Speed limped across third, but the Swede was penalized and dropped to 10th place for the move.

"He apologized a bunch – obviously he lost control of his car, and we were there to stop him," Speed said. "Fortunately we were able to get it back to the line. It turned out pretty good for us in points, at least!"

The disqualification helped Speed jump out to a 33-point lead in the Supercar standings over Block, with Sebastian Eriksson 35 points behind in third and Foust 44 points back in fourth. Eight drivers remain eligible for the Supercar championship as Red Bull GRC heads into the final two races.

Red Bull Global Rallycross Barbados resumes on Sunday with Round 11 of the 2015 season. Both days' main events will be broadcast on NBC on Sunday at 3:30PM ET. Fans can follow the action as it happens with live timing and scoring at http://livetiming.net/GRC.