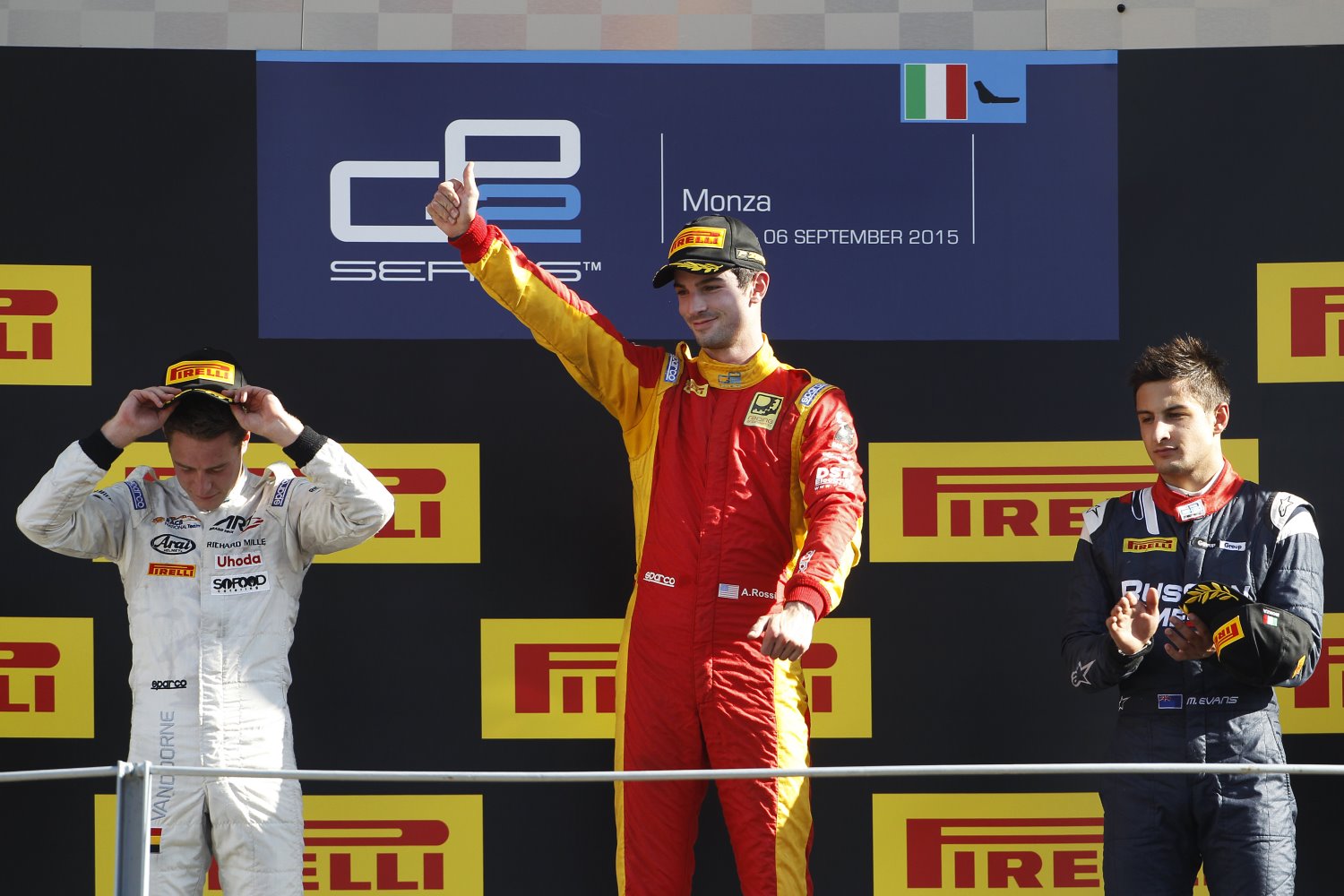 Alexander Rossi drove a sensational Feature Race this afternoon in Monza to take his second, and consecutive, win of the 2015 season. Starting from P8 on the grid, the American completed a brilliant drive in an incident packed race, and battled his way to the top step of the podium with a careful, measured and, above all, skillful drive.

After a tricky qualifying session, Alexander lined up in P8 on the grid knowing he had everything to do to close the gap to Stoffel Vandoorne and be in a position to fight for a podium. As the lights went out Alexander initially lost a place to Marciello however quickly regained the place, also passing Pic, Stanaway and Haryanto during the course of the lap to rise up to 5th, and right behind Vandoorne. On lap three an accident elsewhere caused a Safety Car period that lasted for two laps and on lap six Alexander moved up to 4th as Vandoorne took his mandatory pitstop.

By lap fifteen, the half-way point of the race, Alexander was fighting with Vandoorne and was just 0.6 seconds behind the ART car and 4.3 seconds ahead of Cecotto. He soon pulled alongside Vandoorne and passed the Belgian into turn one, however the ART car regained the advantage into the next corner. Over the next five laps Alexander put huge pressure on Vandoorne as it was clear the two cars were evenly matched. Despite Vandoorne throwing everything he had to keep the lead, Alexander kept a cool head, chose his moment, and made the move cleanly on lap 23 to storm the victory, pulling out of the slipstream of the ART car along the main straight and taking the lead under braking into turn one. Alexander slowly pulled away and managed to hold off Vandoorne who now had the advantage of DRS. With two laps remaining Alexander set his fastest lap of the race so far as he opened out the gap to 0.9 seconds, and on the next lap it grew to 1.1 seconds with the advantage of moving out of DRS range. The final lap saw Alexander deliver a calm and careful end to the Feature Race and he crossed the finishing line ahead of Vandoorne to take a stunning victory.

Alexander maintains his second place in the driver rankings, but has closed the gap to Stoffel Vandoorne's lead. From 200 Formula car starts, Alexander has now completed 41 wins, 74 podiums, 36 poles and has a current win percentage of 20.5%.

Alexander Rossi: "This win is special. I think we are finally able to really show just how capable we are, and I'm extremely grateful to Racing Engineering for the phenomenal car we have. I feel incredibly proud to be standing on the top step again, representing America and hearing our anthem played out is a truly special feeling. Every single person in this team deserves our victory today and I know the goal will be to keep our momentum throughout the rest of the season and keep these wins coming. It’s an important moment to pause and thank everyone who has and continues to support me, and I feel exceptionally grateful to the people around me. Thank you."

Alfonso de Orleans-Borbon, Team Principal Racing Engineering: "Alexander drove an exceptional race today. It is fair to say we were all disappointed after qualifying as P8 on the grid is not where we wanted to be, and we knew that Alexander had the potential to be on the podium once more. But Alexander truly impressed today, overtaking beautifully and keeping a calm head while incidents happened all around. His overtake on Vandoorne was beautiful to watch and it shows just how experience truly makes the difference. Instead of rushing in and potentially causing damage to his car, he kept a cool head and chose his moment perfectly. Alexander deserves this win today – we’ve known since the beginning that we were capable of being on the top step throughout the season, and today was the perfect result."