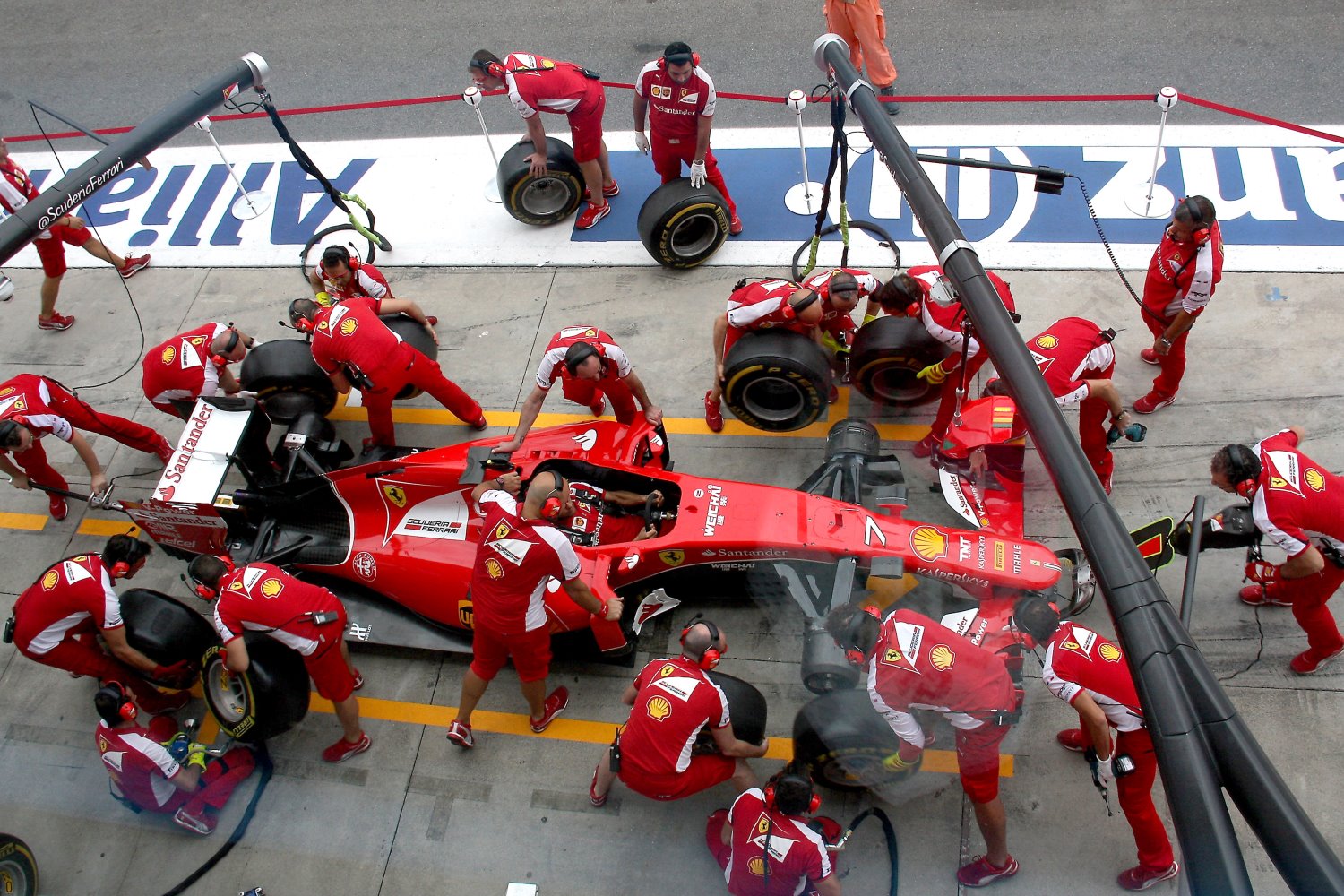 Drivers silenced as Pirelli survives Spa blowout saga
(GMM) The Pirelli blowout saga reached its zenith at Monza, when an unprecedented summit took place ahead of the Italian grand prix.

Bernie Ecclestone was there for the one-hour meeting, as well as fellow hard-hitters Marco Tronchetti Provera, the Pirelli CEO, and the most vocal Pirelli critics like Sebastian Vettel and Fernando Alonso.

According to Auto Motor und Sport, there were some heated exchanges, such as when Ecclestone told the critical parties "Have there not always been punctures in racing?"

Mercedes' Niki Lauda reportedly replied: "Yes, but in my time I sat down 10 minutes later with the tire company, and I was only happy when they told me the reason. And it didn't take two weeks."

And paddock skepticism about Pirelli's reasons for the Spa blowups still remains.

The sport's Italian tire supplier, however, is fighting back — and Pirelli has the full support of the F1 supremo.

"If anyone has got problems, they should talk to the people making the problems," said Ecclestone, referring to the drivers who have been publicly blasting Pirelli.

Pirelli's F1 chief Paul Hembery backed the apparent order of silence, saying any criticism should be made "in the right environment".

"They should express their opinions in the right manner," he added.

It appeared the instruction had an immediate impact, when German Vettel emerged from the meeting and said it had been "useful" but could say "nothing more".

Rosberg, who also suffered a failure at Spa, also said nothing.

The entire controversy came at an awkward time for Pirelli, but Ecclestone indicated that it had not had an effect on the negotiations he is also having with Michelin about the identity of F1's supplier beyond 2016.

Pirelli is also sounding confident about its position going forwards, as Hembery issued an ultimatum that either more tire testing is allowed, or the marque could quit F1.

"If we are going to carry on in 2017 there are very dramatic changes to the tire sizes involved and that needs a proper testing program," he said.

"Yes, it (testing) has to be a condition for staying in," added Hembery.

Promoter says 'no panic' in Monza future talks
(GMM) According to Bernie Ecclestone, the future of the Italian grand prix at Monza is hanging by a thread.

Italian reports quote the F1 supremo as warning that, even after new meetings with circuit chiefs, the fate of the fabled and popular race is not looking good.

"The renewal of the contract is unlikely," said Ecclestone, "as they do not want to pay."

All around the paddock, however, fingers are being crossed that F1 does not lose yet another of its most historic venues.

"Would it be a significant loss for formula one? Of course," said Ecclestone, "but it will not be a problem if they pay the price we are asking."

When asked to imagine F1 without Monza, however, the 84-year-old appeared unmoved, telling the New York Times: "We don't have Germany. We don't have France."

The message from two significant players on the Italian side, however, is "don't panic".

The president of the race promoter Sias, Andrea Dell'Orto, told the Italian broadcaster Sky at Monza: "For my part I can say that we had a positive meeting with Ecclestone.

"Of course, we have started from a difficult situation, because to close the gap with the requirements, we need outside intervention. It will require perhaps the (help of the) government or other sources.

"However, it is not a panic situation, nor is there a hurry," he added. "We are having a negotiation and it is normal to meet a number of times."

And the highly-influential figure Luca di Montezemolo, the long-time former Ferrari president who is close to the F1 supremo, sounds confident.

"I spoke to Ecclestone two days ago," he revealed. "Ferrari has always been close to Monza and the Tifosi, and there may not be a formula one without Monza.

"That said," Montezemolo added, "Monza has to realize it needs to do what is necessary, but you will see that there will not be problems."

Lotus denies reports of pre-Singapore team collapse
(GMM) Lotus has hit back at reports Monza could be the last race in the Enstone team's long history.

Neither side can hide now that discussions about a buyout by Renault are taking place, as many of the details are being leaked to the media.

France's RMC Sport, for instance, is reporting that alongside Alain Prost at the helm of the new Renault works team could be Frederic Vasseur, the current boss of the GP2 team ART.

That is because Renault CEO Carlos Ghosn is yet to give his definitive "yes" to the buyout, even though detailed negotiations were reportedly taking place as recently as late this week.

Meanwhile, it is said that time is running out for the now cash-starved Lotus team, with some saying Enstone does not even have the money to travel from Monza to Singapore for the next race.

But team CEO Matthew Carter said at Monza: "I can guarantee you that we'll be at Singapore. The sea freight container has left, our air freight will leave next week.

"We will be in Singapore," he insisted. "As far as the rest of the races this season, we have a budget in place and we will operate to that budget and will be at all the races."

"This is no official statement," he said, "but my own gut feeling is that the parties could and should be able to announce something (soon).

"If Renault has made the decision, then the official confirmation should not be long in the coming. We need to work as quickly as possible on the new car," added Gastaldi.

Vettel was third fastest at Monza on Friday but finished eight tenths behind the Silver Arrows, which had new-specification power units.

"It was a solid day for us, we had no issues with the car and we've got quite a lot of running which is always positive," said Vettel.

"The qualifying here will be very important: overtaking is possible with so long straights and this always helps, but still the first corner is very tight and the higher up you are the easiest it is.

"The first two cars are quite far away unfortunately, maybe we can get a bit closer tomorrow and we'll see what happens in the race.

"The focus now is on the car and on how to find a few tenths for tomorrow as we're not entirely happy."

Kimi RÃ¤ikkÃ¶nen was three tenths of a second slower than Vettel in the sister Ferrari.

"It was a very normal Friday, the sessions were running smoothly and we had no issues," he said.

"I was not very happy with my driving, we have to fix a couple of things and then, like in any other race, we'll have some work to do to try to improve and find the right set up for tomorrow and Sunday."

But although encouraged by their early speed, with Perez also topping the speed trap, both drivers are approaching the remainder of the weekend with caution.

"We had a change of brake pad material ahead of the first session and it was difficult at first, but we built up into it and set a really good lap time on the option tires.

"I feel there's potential for even more to come and that we can make further improvements to the balance.

"To be P4 and P5 in these practice sessions is encouraging, although we can't read too much into it because we don't know what the other teams were doing in their programs.

"Tomorrow is going to be an important day for us to push forwards."

Hulkenberg expects a massive battle behind the pace-setting Mercedes drivers.

"It's really close between us, Ferrari, Williams and Lotus," he said.

"When everybody is in their best engine mode and on low fuel, anything can happen."

Red Bull team boss Christian Horner said ahead of the event that both drivers were likely to take grid drops to boost their chances at the following flyaway events.

Kvyat, meanwhile, is set to lose 15 places for a sixth ICE and fifth TC.

Red Bull is set to change more elements for Saturday's running at Monza to free up fresh engines for Singapore and Japan, before planned Renault upgrades in Russia.