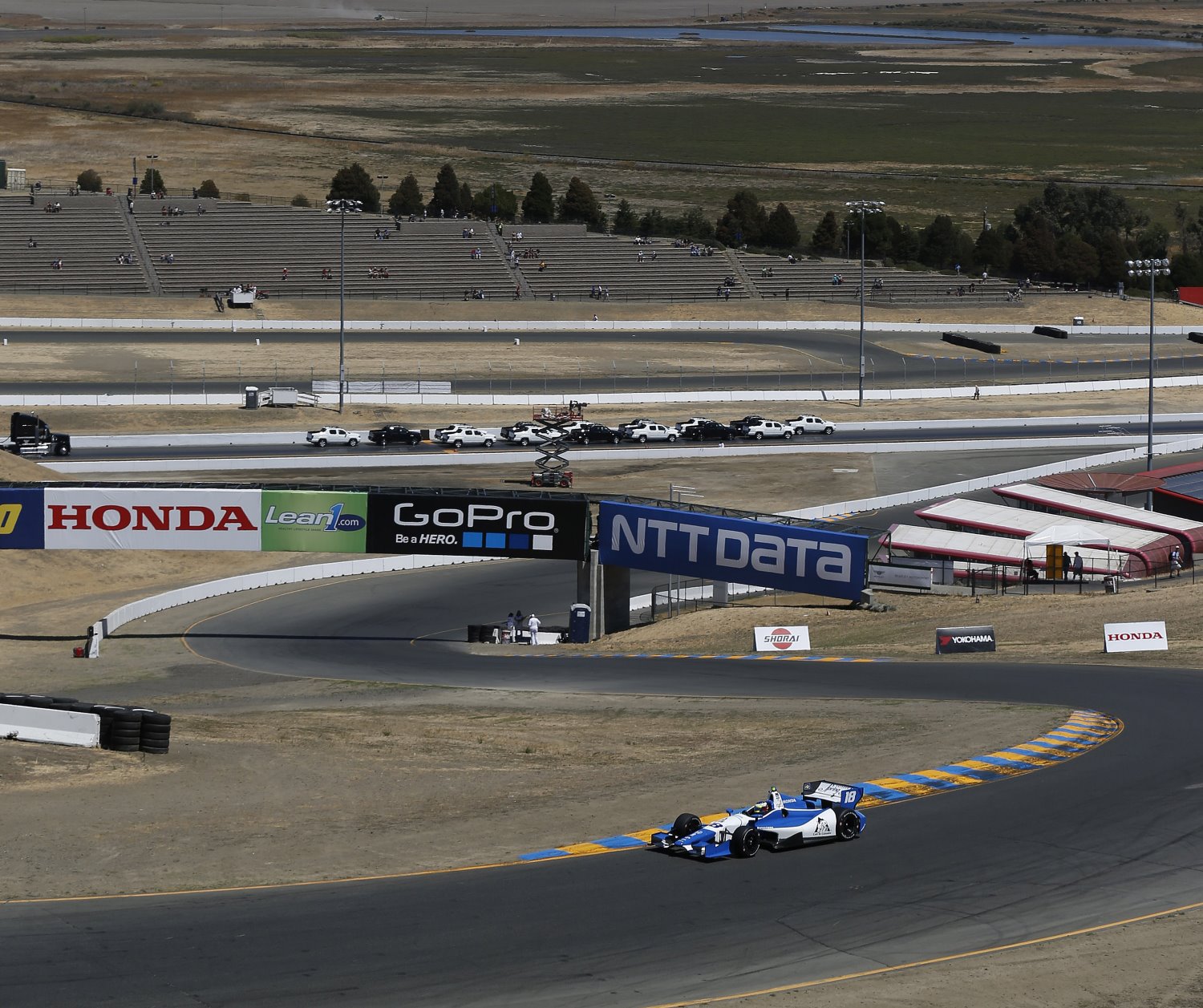 Below, are a few news and notes from yesterday afternoon at Sonoma Raceway.

You did not see the drivers practice for the duration of the three-and-a-half hour session, largely because they didn't want to use up their weekend allotment of tires. Each team will have 8 sets of blacks and 3 sets of alternate red tires for the weekend. They also have 5 sets of the new rain tires but as you know it’s been relatively dry in California for a while now. And we doubt there will be any need to use the rain tires this weekend.

Sebastien Bourdais had a flashy set of led lights on the #11 Team Hydroxycut – KVSH Racing Chevrolet during one of his stints. They looked pretty impressive in the daylight and I hope we get to see them in the race Sunday.

The pit lane here is split in two by separate halves with a fair distance between the two groups. There are 25 cars entered, which is the third time this season, there have been 25 or more cars (Gp of Indy, Indy 500). We wonder if this will play a factor come Sunday. Championship leader Juan Pablo Montoya is in the second group.

I spoke with Mikhail Aleshin, the #77 entry for SMP Racing who had not raced at all this season. He said it felt good to be back in an IndyCar. I asked him about next season and he replied "We have a saying in Russia. If you want to make God have a good laugh, tell him the plans you are making." To be honest, I have no clue what he meant by that, but I get the sense he is optimistic about a potential return to the series in 2016.

Will Power's brother, Damien, is here. Damien, who bears great resemblance to the reigning IndyCar champion, is a comedian back home in Australia, and claims to be a much better version of his brother. You will probably see him being funny sometime this weekend on TV.

Tomorrow temperature should be more normal than it was Friday, in the low 80s. Stay tuned to AtoRacing1 for updates from the track.

08/28/15 The Indy Cars recently starting a test session that will last from 2:30 to 6 pm local time. It is 94 degrees here in the beautiful Sonoma wine country and the American flag is at half mast in honor of Justin Wilson.

We're not sure what the Teams will be working on today, since some of the teams tested here 2 weeks ago with the Indy Lights drivers. As of right now, three Team Penske cars are running in the top positions while Will Power has not yet hit the race track. Scott Dixon and Graham Rahal have also not left their pits yet.

Dixon, who enters the weekend 47 points behind championship leader Juan Pablo Montoya, is concerned with tire degradation at this track. He said the red alternate tire goes off faster here than at other tracks. But he agrees that we have excellent racing this year which he attributed in part to the new aero knits.

Sage Karam is also here but not racing his #8 Ganassi racing entry this weekend. Sebastian Saavedra is in the car this weekend with the AFS sponsorship. Karam did not look his best today and said "I am hurting on the inside." Understandably, the past week had to be emotionally draining for him.

I will keep you updated as I get more information.