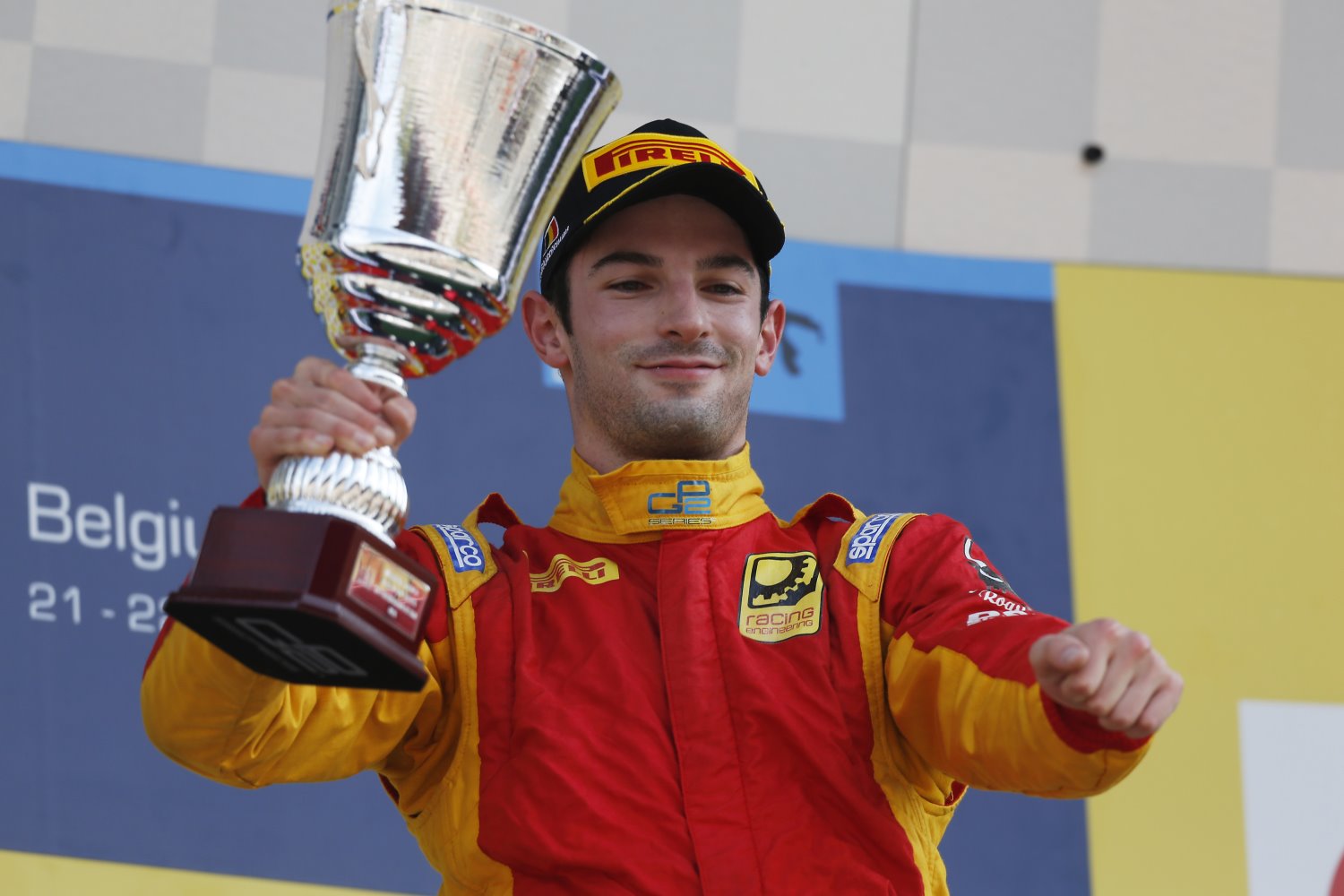 Alexander Rossi claimed his first victory, and fourth podium of the year, in an incredible final race in Spa-Francorchamps. Starting from third on the grid, the American Driver made a phenomenal start to take the lead, and maintained P1 throughout the intense race to bring home his first victory for the Racing Engineering team. Alexander now moves back up to second place in the Driver Championship rankings, closing the gap to current leader Stoffel Vandoorne as the 2015 race season heads towards to final few races of the year.

Friday’s practice session in Spa took place under unusually warm conditions at the iconic circuit, with air and track temperatures of 20Â° and 30Â° respectively for the forty five minute morning session. All the cars were running the Pirelli P Zero Orange hard compound tires, and the nature of the Spa circuit meant that a good aerodynamic balance between the high speed sections and the medium and high speed corners was crucial for a strong lap time. True to form, Alexander Rossi set the pace by going fastest on his first flying lap with a time of 1:58.091s and then improving to 1:57.731s on his fifth lap. After a strong morning’s work, he finished the session in P3 overall.

The heat was on for the thirty minute qualifying session with air and track temperatures now at 23Â° and 40Â° respectively and all cars now using the Pirelli P Zero Yellow soft compound tires. Alexander was immediately on the pace once more as the session got underway, with his initial lap putting him in 6th on 1:57.313s. He then improved to a 1:57.271s before coming in for a few final adjustments. Alexander headed out for the final few laps of qualifying and went faster still to regain 6th 1:56.845s. However traffic meant that he was unable to improve his time, and so he finished in P8, knowing there was strong potential for Saturday’s Feature Race.

Saturday saw Alexander make an incredible start off the grid during the Feature Race, and as there was contact between Rowland and Matsushita into La Source the American took full advantage to take an amazing second place behind pole sitter Vandoorne. By lap three Alexander was still lying second, 1.7 seconds behind Vandoorne and 2.3 seconds ahead of Sirotkin. A Safety Car incident on lap six saw all the cars that had started on the soft compound tires, including Vandoorne, taking their mandatory pitstop and putting Alexander, who was now in the lead, at a potential disadvantage.

After several laps of Safety Car running it was decided to show the red flag on lap nine and the Racing Engineering team took the opportunity to change Alexander to the soft tires although they would still need to take a mandatory pitstop later in the race. After a delay of thirty minutes the cars returned to the track behind the Safety Car for one lap and racing then resumed on lap nine with Alexander taking an immediate lead and setting a new fastest race lap of 2:01.036s. By lap thirteen he had opened out a 2.4 second gap on Evans. The Racing Engineering car was now flying, lapping almost a second a lap faster than other cars on the track as Alexander fought to open out as big a gap as possible before taking his pitstop. On lap 16 Alexander dived into the pits changing to another set of soft tires and he resumed the track in 14th position.

Once again Alexander set some very fast times and by lap 18 he was in 11th. On lap 19 he was again fastest with a time of 2:00.946s; cars pitting ahead moved him up to 9th with just four laps to go, and he soon passed Berthon into the Bus Stop Chicane for 8th. As the final cars took their pitstops Alexander was now 5th but Leal was too far ahead for him to gain any further places and as he entered the chicane on the last lap he made contact with a closing Evans and both cars left the track briefly meaning he lost the place, taking the checkered flag in 6th.

Sunday saw Alexander line up in 3rd on the grid and with a race win in sight. Once more he made a phenomenal start, taking the two cars in front of him and the lead of the 18 lap race. Despite incidents and pressure from other drivers, Alexander managed to drive a calm race, showing his experience and skill, and maintaining his tires to bring home the much deserved first win of the season in front of packed crowds at the iconic Spa-Francorchamps race track.

A strong points weekend sees Alexander move back up to second in the Driver ranking, and the Racing Engineering team in a strong position as they look to the next race in Monza, Italy.

Alexander Rossi: "This win was the perfect timing for myself and gives momentum for the team leading into the last eight races. We had a good start yesterday and again today, which enabled me to challenge for the lead into turn 1 in both races. Today I could see the fight for the lead was going to be turn 5 and not turn 1; Jordan and I fought hard under braking, but I had the better line into the chicane and was able to overtake. From there it was about not only managing the tires and the gap to the car behind, but also being aware of the pressure on me from the other competitors with use of DRS. Jordan would close on me in sector 1, which meant I needed to open up a bit of gap each lap in sector 2, which in turn took a bit more from my tires. It was tricky to manage the tires and the gap in this race, but we managed it well and today proved our tire management is there as well.

"It gives us that additional confidence going into Monza and final 8 races. We just need to win more races and keep focused on scoring as many points as possible in the remaining rounds. I am very proud of the team. We had a bit of a slow start to the weekend, but everyone bounced back perfectly to the situation around us."

Alfonso de Orleans-Borbon, Team Principal Racing Engineering: “It’s been an incredible weekend; Alexander drove an absolutely perfect race today to bring home the first win of the season for the team. While yesterday’s race fortune meant we were denied the win Alexander certainly would have had were it not for the red flag, Alexander yet again showed his talent, experience and professionalism by fighting through the field not once, but twice, and achieving the absolute best possible result for the team. Today’s race was a showcase of class. After a superb start Alexander once more showed what a wise and experienced head he has on his shoulders by leading the race from start to finish. From the first moment we headed out on track this year, we always knew that a win was within our reach, and today was the perfect result."