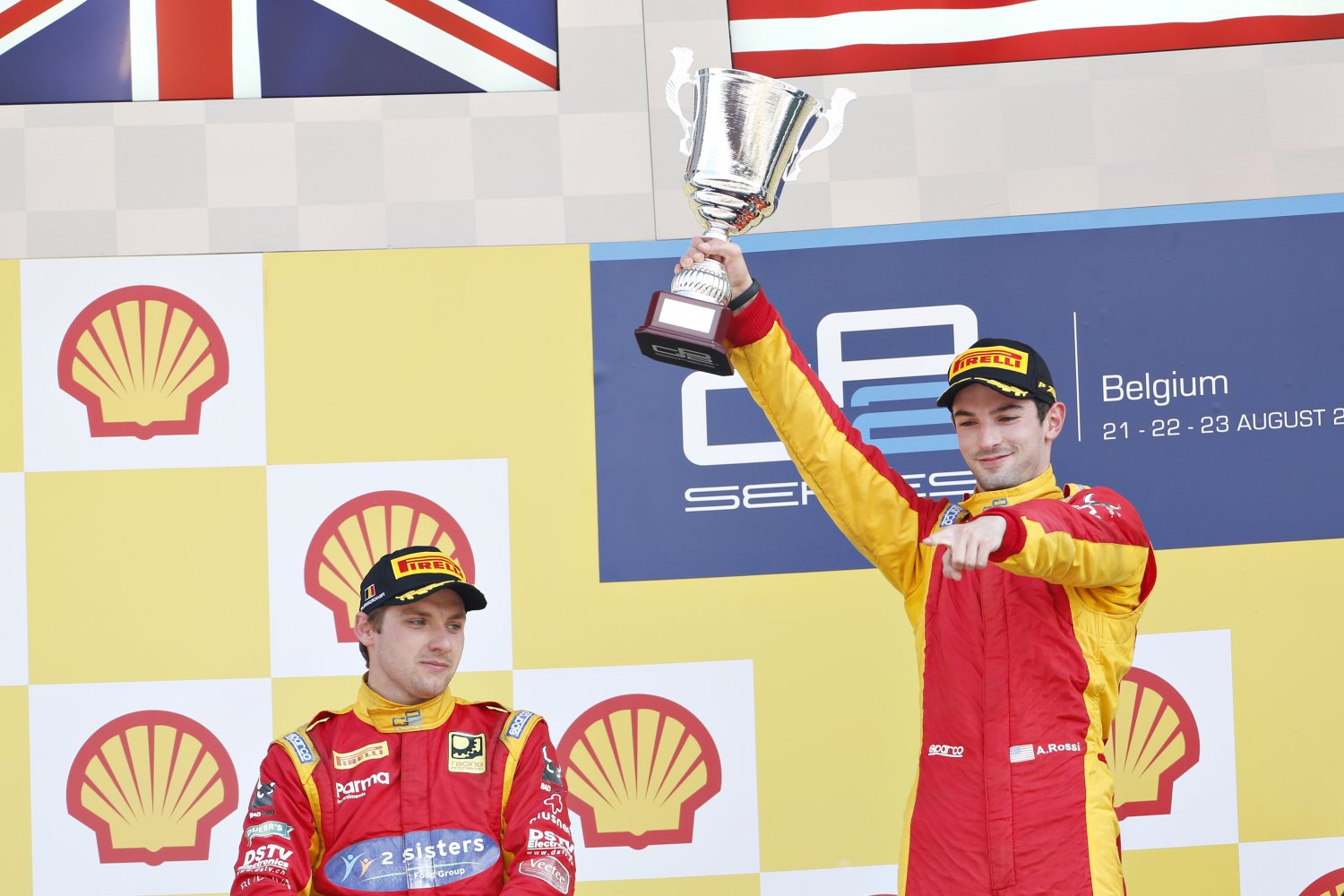 Alexander Rossi has claimed his first win of the year in this morning’s sprint race at the Spa Francorchamps circuit, dominating his rivals after taking the lead on the first lap and controlling the pace throughout to bring home a 1-2 for Racing Engineering with Jordan King ahead of Mitch Evans.

King made a good start from pole when the lights went out, but Rossi’s getaway was even better: the pair led Nathanael Berthon and Julian Leal into La Source, with Stoffel Vandoorne making a strong start and taking the outside line to get by Evans, Sergey Sirotkin and Artem Markelov as the field headed down towards Eau Rouge: Rossi was pushing hard and, when King was slightly unsettled on the curbs at Les Combes, the American grabbed the lead.

Behind them Leal was struggling as his rivals lined up to claim his position, with Vandoorne the first of many to mug the likeable Colombian on the Kemmel straight: the Belgian was determined to repeat yesterday’s performance and put himself in a podium position by dispatching Berthon on lap 10, but Evans was following the McLaren tester everywhere he went and was equally keen to take down the series leader if he had a chance.

The pair were soon closing on King, who had followed his teammate all race long and could almost taste the champagne for his first podium: with Vandoorne closing in his mirrors he asked the team to direct Rossi to pick up the pace, but the American was using all of his experience to look after his tires for when it really counts, the final few laps.

With 5 laps to go Arthur Pic beached himself in the gravel, prompting a brief virtual safety car period: Evans slightly missed the restart, fortuitously allowing Vandoorne a bit of crucial bit of space which he used when a lock up into the Bus Stop chicane saw the local man run wide. But Evans made up for his slow reaction and was soon on the Belgian’s coat tail, forcing him to defend hard at Les Combes a few laps later before finally making it stick at the same corner on the final lap.

As the flag dropped Rossi claimed his first win of the season, King bagged his first podium in the series and the pair gave Racing Engineering a 1-2, Evans grabbed RUSSIAN TIME’s second podium of the weekend, and Vandoorne had to make do with P4 after his win yesterday. Markelov claimed more points with 5th after yesterday’s podium, with countryman Sirotkin mugging Berthon at the final corner and Alex Lynn stealing P8 from Sergio Canamasas on the last lap of the race.

Vandoorne will still be satisfied with his weekend racing at home: the Belgian now leads Rossi by 233 points to 128, with Rio Haryanto and Sirotkin both on 109 points ahead of Lynn on 86 in the drivers’ championship, while ART Grand Prix still lead the teams’ championship on 281 points, with Racing Engineering closing in to 170 points ahead of Campos Racing on 148, DAMS on 147 and Rapax on 128 points ahead of the next round in Monza in just two weeks’ time.