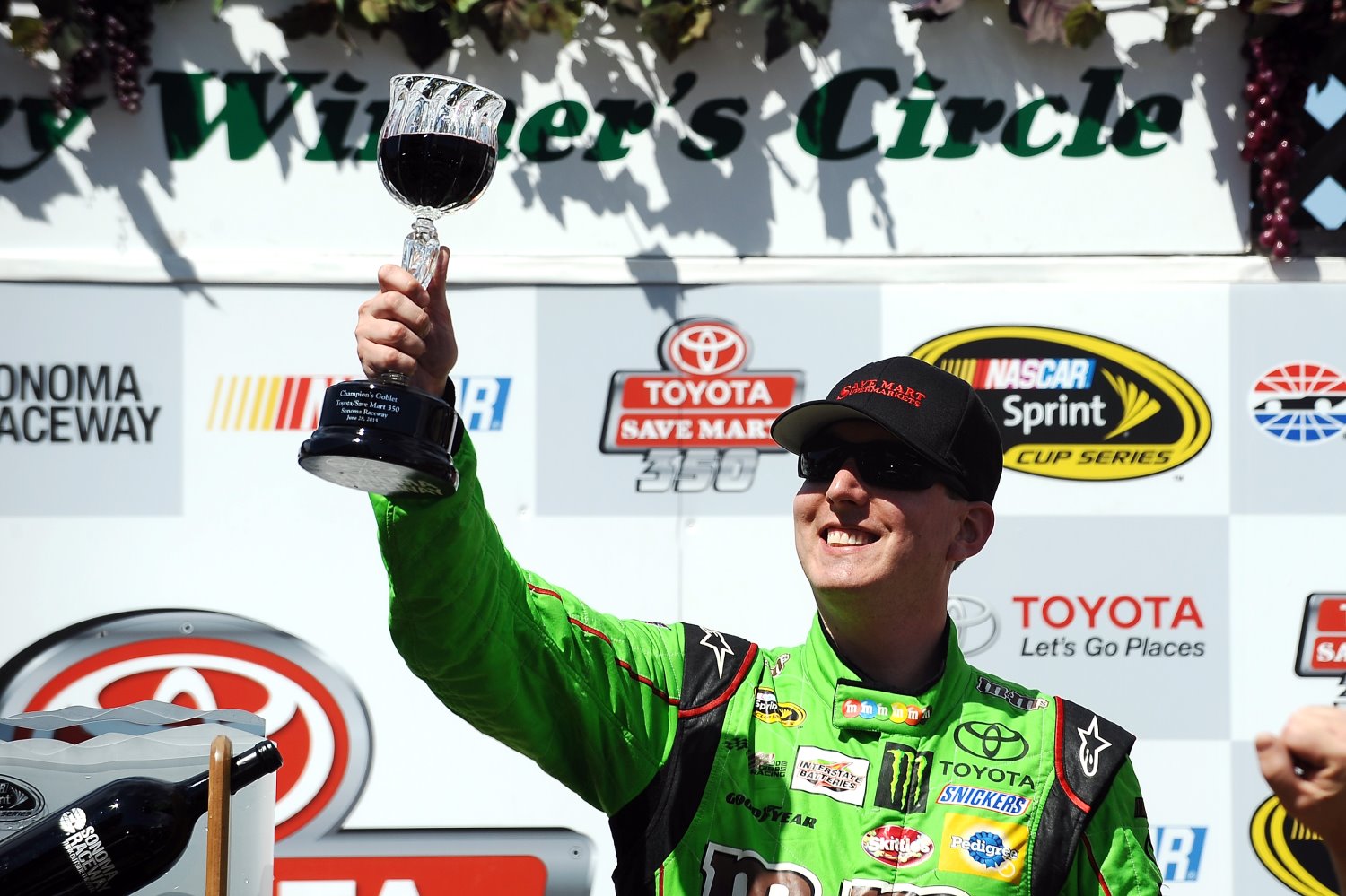 How much confidence do you have entering Watkins Glen after winning at Sonoma?

"It was certainly unexpected I guess in Sonoma, but I feel like I've been a pretty good road racer over the years so it wasn't surprising. Just look forward to these races. I always do every year. It's kind of fun, it's kind of a 'weekend off' from the oval stuff. Love the opportunity to get out there and turn right, turn left and have some shifting going one and everything else. You try to make the most of it and have some fun with it and come out of here with some decent finishes. Over the years we've run real well here at Watkins Glen. I think a little more so than Sonoma, but winning at Sonoma and having a really good car out there, I'm really optimistic about being here this weekend and hopefully carrying that road course momentum through to Watkins Glen."

Have you talked with your team about running out of fuel at Pocono last week?

"Of course Adam (Stevens, crew chief) and I talked about it this week and I went in Tuesday morning and watching a couple of the NASCAR shows this week and heard some of the commentators kind of beating up on me about not saving fuel and listening to my crew chief. My crew chief told me I did nothing wrong. He told me that we were not short on fuel, that we were two-thirds of a lap to the good and he was not asking me to save fuel, but once I couldn't really catch the 22 (Joey Logano) to just save in case there was a yellow – save the car, save the tires, save the brakes, save all the stuff, the mechanics of the race car. So in case we did have a shootout at the end that I would be ready for it. It wasn't until the 22 bunch started getting on Joey about saving fuel with about seven (laps) to go that then I heard my first, 'Okay, save fuel.' By then, you're not going to save what you need in seven laps, you're not going to have the opportunity to do that. I could have if I would have gotten, what I told Adam, the harp. At the Brickyard we were short on fuel and Adam told me, 'Hey, save fuel.' I asked him then again, 'Are you sure?' He goes, 'Yeah bud, there's absolutely going to be no checkered flag for us if you don't save fuel.' The tone was quite higher than that. We obviously have real good communication with one another and we weren't short and for some reason we ended up being short that last run and we know the reason why now, but we didn't know at that particular point."

How are you feeling this week compared to entering the race at Sonoma?

"I'm feeling better this week for sure than what I was at Sonoma. This is another month or month-and-a-half farther down the road in recovery and healing and everything else. I'm doing really, really good and I feel really, really good week in and week out getting out of the car. Everything is going real well for me. I can't wait for the off-season to get the plates removed in my foot and then I feel like I'll be right back to what I was before."

What is Joe Gibbs like as a team owner and leader?

"Joe's (Gibbs, team owner) obviously a huge leader not only in our sport, but also NFL – that's kind of where it started with him being the coach for years and being a three-time Super Bowl champion. I think everyone's well respected the man because of his demeanor as well as his beliefs and the strong Christian faith that he has. He obviously has done a really good job of knowing how to manage people and what to do with people over the years and he continues to prove that in the racing business as well too. Joe's been a great leader for our sport or for our team and for his organization. Each and every year, I continue to enjoy driving for him and learning from him and having those talks and those laughs and those enjoyable times that we have together."

Have you ever raced in the rain?

"I've never won a race in the rain. I've raced in the rain twice in my life. Once was a Legends car race at the Charlotte Motor Speedway on Tuesday night and (Joey) Logano waxed the field, I do remember that. He was checked out. I think I finished fourth and he lapped me if that's any indication with the Legends cars there for the Summer Shootout. Past that, the second one was that there was a rain race in Canada in the Nationwide Series then, I think it was 2009 and I don't think it started in the rain, but it rained so we all came in and did the rain tire thing and then it stopped raining and it started to dry out, but we were so close to the end of the race that nobody really wanted to come in and waste the time to put dries back on so we were just sliding around and just absolutely blistered the rain tires — just killed them. It's really, really difficult to know when to come in and put the slicks on because there could be a path where it's dry, but there's other areas of the race track or spots on the race track that are wet and if you're running slicks and you hit those wet spots, it's not going to be good. You really have to manage that separation of dry versus wet."

Do you think NASCAR should consider changing the rules to get into the Chase to more than just a race win?

"I don't think so. I think winning in this sport is very, very tough and you see it every single year. I think the average is only between 12 and 14 winners in a season and that's been that way for 15 years or 20 years or whatever it's been. It's not all that easy to win these races and sometimes you look at teams – maybe last year you look at Aric Almirola and AJ Allmendinger, they won races to get themselves into the Chase, but were they're teams really ready for the Chase? That's not for any of us to decide, it's for them to be able to compete and have that opportunity to compete for the championship. Unfortunately I think Almirola had really bad luck to start, I think he blew up twice so his was over before it even began. There's opportunity for teams like that and I think this sport needs that. If AJ were to win again this weekend, I think it would be perfect for him to have the opportunity to race in the Chase and same for anybody else like a Tony Stewart, if he were to win this weekend I think it would be a true revival story of his season and maybe of the rest of his career."

Have you raced harder knowing you need to get into the top-30 in points along with the race wins?

"Good point, I don't know. I just think that we're really on a roll right now. I think everything is just really clicking for the 18 M&M's team. We won one and we weren't necessarily satisfied with that so we went to Kentucky, a place that's really good for me and we won again. We went to a place like Loudon (N.H.) where I finished second in three of the last four races there and we won there this time. Then we backed it up at Indy where I finished second I think two of the last three years. I've had some really good runs at these places, we just haven't been able to close the deal and finally closing the deal it just all came together. I'm not saying that those other teams aren't trying, we're all well aware of the 48 (Jimmie Johnson) team strategy every single season, right? They get in the Chase, they lock themselves in and then they go play for however long in order to try to learn some things. They're very smart in what they do and I'm not so certain that the way they're running isn't fooling anyone right now."

What have you witnessed as the biggest change with Joe Gibbs Racing this season?

"I think it's a lot of things really, to be honest with you. I think it's the new aero package that we have this year on everybody's car, but it benefited us at the Toyota camp a little bit more. I think our engine shop has definitely done a good job over the off-season adapting to this new engine change and it's just a matter of everyone at Joe Gibbs Racing, the engineering group and everything coming up with some fresh ideas over the off-season to try. We came out of the box, I wasn't there, but we came out of the box strong. They went to Vegas and Denny (Hamlin) ran in the top-five and they went to California and I think Matt (Kenseth) would have won if it wasn't for the rear end axle breaking on pit road. Everybody just seemed to be really working well this year and having some good, solid runs even before I got back. Since I've gotten back in the race car at Charlotte in May it just definitely seemed like that next level has kind of taken off for us at Joe Gibbs Racing, I don't know why, but I felt like getting back in obviously I needed to make up my points deficit and everything and I needed to run real well and run strong. We've really been able to do that and we've capitalized on some good days. We had some bad days, but we've definitely capitalized on some of those good days in winning four races. It's just a matter now of hoping to continue this wave, this ride all the way through the next 15 weeks. Certainly, I've had plenty of years in my career where we've made it to Chase and everything has sort of hit a brick wall. Hopefully we don't have that and JGR continues to power through and really look strong through the post season."