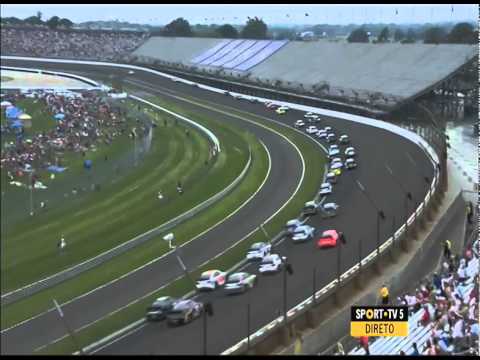 Watching the weekend’s Brickyard 400, it was impossible not to notice two things on the NBC broadcast: the lack of on-track passing outside of the first few laps after the initial green flag or a restart, and, perhaps more alarmingly, the massive amount of empty seats around the 2.5-mile speedway.

No matter how hard the cameras tried – and they tried pretty hard – it was impossible to hide the meagre amount of people who had arrived at the corner of 16th and Georgetown to watch the 21st visit by NASCAR’s top series to the most famous racetrack in the world.

Perhaps it was even the smallest crowd to attend what has, since its inception, been one of NASCAR’s more prestigious events – up there with the Daytona 500, Southern 500 at Darlington, the night race at Bristol and the Memorial Day Coke 600 at Charlotte – but we’ll never know for sure, because IMS doesn’t release crowd figures for any of its events.

Even so, there’s no disputing the fact that the joint was half empty, and perhaps that’s being kind [Editor's Note: 1/4 full at best]. Grandstands inside turn one and across the start-finish line were 1/3 full, as were the towering bleachers at turn four, but there was just a scattering of diehard fans in the infield, and even fewer in grandstands elsewhere around the mammoth speedway.

The decline of attendance for the Brickyard 400 has been as quick as it’s been sad. No one likes seeing the great track so empty. Not so long ago, the Brickyard 400 actually pulled a crowd that really gave the Indianapolis 500 attendance a run for its money. Back then, the CART-IRL war had fractured the open wheel community, and NASCAR was going through its early 2000s boom.

Things have changed. IndyCar is regaining the upper hand at Indy, helped along, in part, by scintillating racing.

Indianapolis Motor Speedway was never designed with stock-cars in mind. The flat and tight corners mean single-file is the fastest way through them, and passing even on the long straights isn’t easy. The difference between the zippy IndyCars and the lumbering stock cars is stark.

One series puts on a great show, the other doesn’t.

This year’s Indianapolis 500 had more drama and on-track activity than you could poke a stick at. Aside from a few exciting restarts, the Sprint Cup Series race was a snoozer. You know things are bad when even the NBC analysts, including the excellent Jeff Burton, talk about how hard it is to pass. It takes laps to set up passes at Indy.

Originally the idea of NASCAR stockers racing around IndyCar’s holy ground was good publicity for NASCAR, and a novelty event for Midwestern types, whose attendance has waned. For a while people came to see what all the fuss was about, but no longer. The hype seems to have always outdone the actual race quality at Indy. There’ve been tire debacles and a string of poor races, and the combination is a bad one for the sport, and the speedway as well.

Not even the presence of local heroes like Jeff Gordon, Tony Stewart and Ryan Newman can bump attendance up that much. It was Gordon’s swansong at Indianapolis this year, which surely brought a few extra fans in through the gates, and with both Stewart and Newman mired in form slumps, what sort of promotion gimmick will get fans to turn up again?

It must be embarrassing for NASCAR’s powers-that-be. They routinely say that the Brickyard 400 is one of their most prestigious races – some believe it’s the most important outside of the Daytona 500 – and running such an important event in front of next to no one isn’t good. Indianapolis can’t and won’t pull down seats that they need for the Indianapolis 500, so as long as the Brickyard 400 is run, we’ll see those banks of empty seats beamed into our lounge rooms.

The struggle to draw a crowd at the Brickyard further supports the narrative that the sport, after absolutely booming through the early 2000s, is dying a slow death nationally. It will always be popular in the south, but tracks in other parts of the country are downsizing dramatically a decade after adding more seats when NASCAR was at its national peak.

There isn’t a new generation of fans coming through, and older fans are upset with various elements – the most recent one has been the ban on Confederate flags, which many interpret as the sport turning its back on its southern roots – of a sport that is also facing slumping television ratings and struggling to keep up with the behemoths of American sport.

We should probably have seen this Brickyard 400 eventuality coming. As a lot of IndyCar races on NASCAR ovals haven’t been great because of the drastic differences between the cars, this stock car experiment at Indianapolis was great for a while, but now there’s no novelty value or the lure of knowing you’ll see a top-quality race when you walk into the Indianapolis Motor Speedway. At least when it’s May and the Indy 500 is on, you’re almost guaranteed a barn-burner.

Maybe it’s time for NASCAR and the Indianapolis Motor Speedway to look at ending their relationship? It was a good run while it lasted, but if the crowd continues trending downward, it’ll be basically empty in three or four years, and that won’t be good for anyone. The Roar

[Editor's Note: For years now AR1 has called for the termination of the Brickyard 400 and the addition on a 2nd IndyCar race at the Brickyard – the Indy 400 – to end the IndyCar season in grand style. However, the 'family' likes getting all that NASCAR TV money. So although the NASCAR crowd dwindles, the TV money pays most of the purse. AR1.com argues they can make as much money, or more, on and Indy 400.]