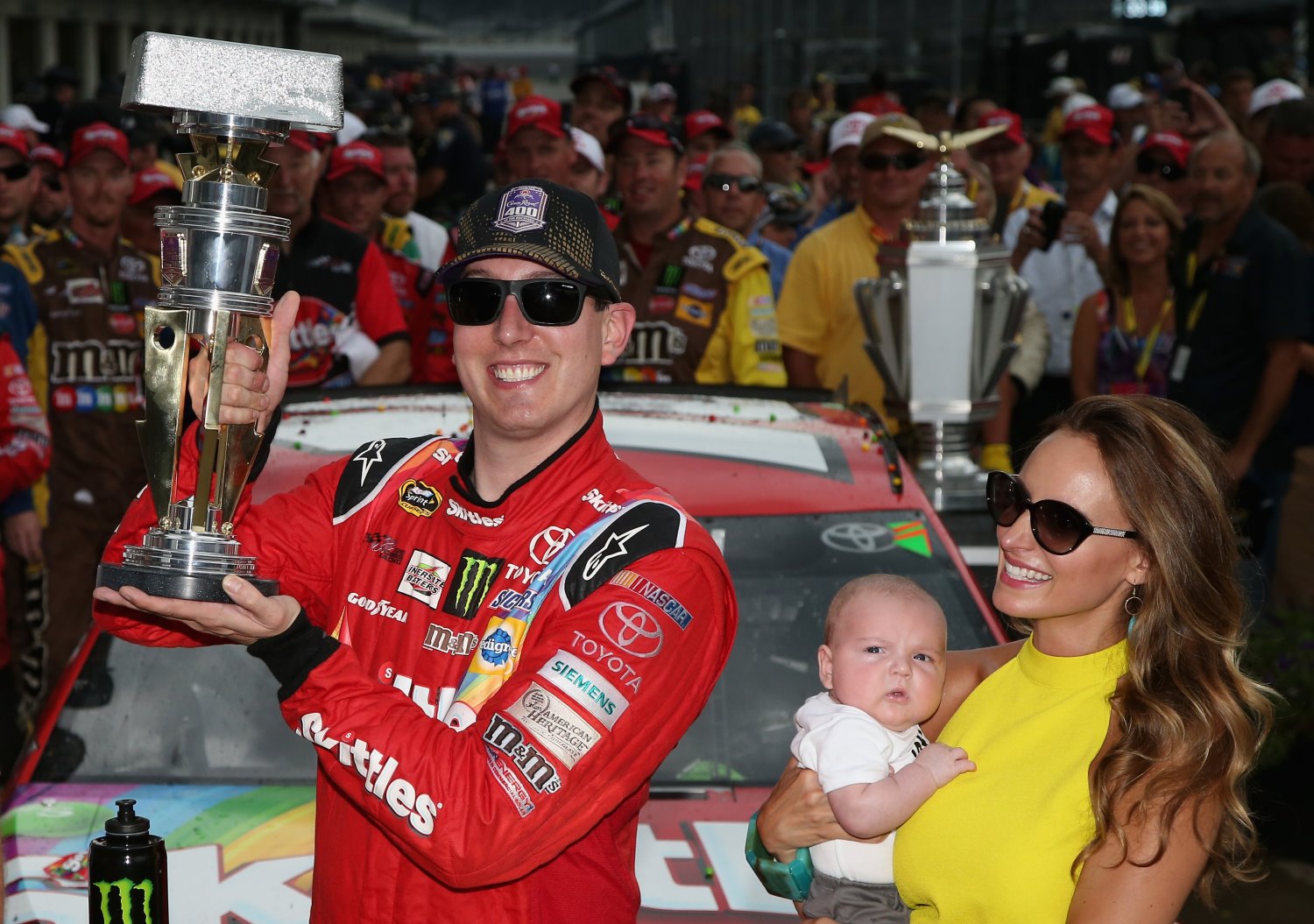 Â· With the victory, Toyota has now won at all 23 active NSCS race tracks for a total of 72 victories since entering the series in 2007.

Â· The Las Vegas-native started ninth and led three for a total of 19 laps (of 164) en route to his fourth victory of the 2015 season – he also won at Sonoma Raceway, Kentucky Speedway and New Hampshire Motor Speedway.

Â· Busch has earned the four victories in the past five races of the season and now sits 23 points out of the 30th position in the point standings in order to qualify for this year's Chase for the Sprint Cup.

How does it feel to get another victory?

"I can't believe what's going on. Everybody is going to be chasing the rainbow tonight, that's for sure. This Skittles Camry was awesome. I know if we could just get out front we could just go. Adam Stevens (crew chief) and these guys they dialed it in again. Thanks Sprint and Toyota and the fans. It's really a treat to win here at Indy. I appreciate all the fans that I have, all the fans that NASCAR has and Toyota has now captured a win at every single active Cup Series race track – that's pretty awesome for us to be able to do that. I can't thank this crew enough. Everyone at Joe Gibbs Racing, all the men and women there, you work so hard and pour your hearts into it. I can't thank everyone that has stood behind me all year."

Does this win give you perspective on the year?

"We're a championship contending team, we just have to be championship eligible. Thank the good Lord for bringing me back when he did. Obviously thanking him for all the success I've had in my life, where I'm at and all my blessings. To get me back as quick as he did, to preserve through that and that deficit. We're still continuing on, we can't have bad days. I don't know that any of that matters, we're going to bask in this moment here."

How does it feel to win in the Cup car at Indy?

"Wow, this is amazing! I don't even know what to say or what to think. Man, to win here at Indy and to do it on the Sprint Cup level – I've been trying for so many years, second a couple times, but this is just so special. Man, I can't say enough and I'm sure there's a rainbow out there somewhere, but there's a rainbow right here in victory lane. This Skittles Camry was awesome today. Adam Stevens (crew chief) and these guys, they are something special. This TRD (Toyota Racing Development) power plant was awesome today. M&M's Crispy, Monster, Toyota, Milky Way, Pedigree and everybody that's on board and the fans – I appreciate the fans and all they are about here at the race track and across the radio in NASCAR that pulls for your particular driver – we appreciate your support and what it's all about."

How were you able to manage all the late race restarts?

Does the four wins you were able to get so closely together boggle the mind?

"It does a little bit. Like I said, this is unbelievable – this is something special. There's nothing else like it. I'm so blessed to be in the position I'm in, I can't thank everyone at Joe Gibbs Racing enough, Joe Gibbs (owner), J.D. Gibbs (president) and the entire family for giving me the opportunity. I know I have plenty of blessings. Man, my wife (Samantha) and my son (Brexton) is here, too. This has been a phenomenal return. I won't say phenomenal year because it was a dismal year to start with, but I guess I'll take that 11 week vacation any year if it's going to look like this."

"We had a pretty good day. I thought we kept chipping away, getting better all day long. Passing was excruciatingly difficult. You had to do it on the restarts. It seemed like this FedEx Express Camry kept getting a little bit better and didn't get on the right lane that second to last restart. Kevin (Harvick) spun his tires when he was on the outside of Kyle (Busch) and backed us up a handful of positions. We were able to battle back and get a few at the end. Overall a pretty good day for Joe Gibbs Racing."

How difficult were those restarts at the end of the race?

"Everybody knows you have to (pass) in the first two laps, after that you just have to ride. We started off as a fuel mileage race with 35 to go or so, we were all five laps short, so we were riding in line there. Then with all those cautions, it gave us the opportunity to race a little bit, but not many guys were getting past turn one before we had problems."

What do you think about the aero package?

Is this a happy fifth-place finish?

"Our car was pretty strong at the end and with a handful of laps to go, we were actually running down the leaders. I felt like we had a shot at it, but you just have to restart in the first couple rows to contend for a win and really whoever comes off turn two with the lead has pretty much got it. You're really racing towards turn two and that's about it."

What do you think about Kyle Busch getting all these wins?

"He's (Kyle Busch) been unstoppable. I can't speak for him and what's in his head – what's in his head is usually scary. Being hurt and being out that long, there's got to be some – not doubts but you wonder what it's going to be like when you get back, if you're going to come back as good as before or whatever, and he's come back better. Happy for him and happy for that team Adam (Stevens, crew chief) does a great job with that team and for the company."

Are you able to take anything away from this package?

"It's terrible, that's what I think. You just can't pass. Yeah, you can run up on the straightaway a little bit, but you can't run through the corner with anything."

"Our Dollar General Toyota was okay today. I thought we had a top-five at times and at the end of the race I felt we were a little off and not as quite as good as we needed to be."