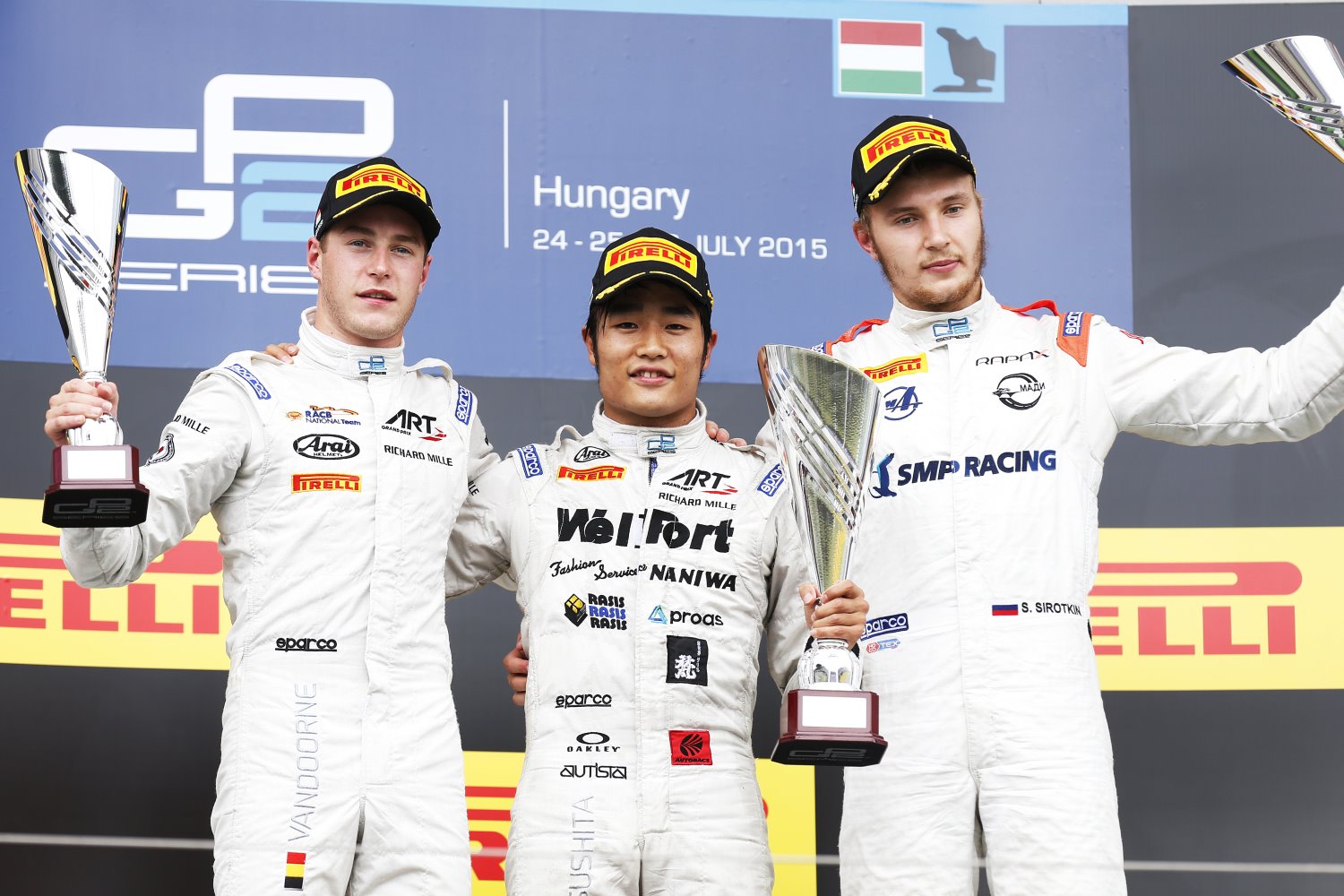 Nobuharu Matsushita crushed the competition for his first GP2 victory this morning at the Hungaroring, easily claiming the win in a sprint race where everyone else struggled with their tires in the cooler conditions to lead the first ART 1-2 since Sam Bird and Jules Bianchi in Monza 2010, ahead of teammate Stoffel Vandoorne and Sergey Sirotkin.

The Japanese driver took advantage of pole position to easily lead his rivals away when the lights went out with a good start, while McLaren tester Vandoorne and Sirotkin made sparkling getaways to run inside into turn one: the Belgian eased his way into P2 while the Russian was briefly held by Raffaele Marciello but got past the Italian around the outside with a lovely pass out of turn two.

With the rest of their rivals shaking out their positions behind them, including an impressive run from last on the grid to tenth by Sergio Canamasas in one lap, the leaders were swapping fastest laps as they looked to lay down a marker, but it wasn’t without a price: by lap nine the Belgian was already complaining of graining and was unable to run at his teammate’s pace.

It was clear that tire management was the order of the day, but that didn’t stop Rio Haryanto pushing Marciello almost all race long: the Indonesian clearly had a better car but the Italian was hanging on around the tight, technical circuit. The Racing Engineering teammates were soon struggling too: Alexander Rossi had to come in for fresh tires on lap 20 after losing a number of places, while Jordan King lost what looked to be a solid P7 around the same time.

And when the flag dropped it was Matsushita who had eased his way to victory, two seconds to the good over Vandoorne, who had to fight off a last lap challenge by Sirotkin for second. Marciello came out on top of Haryanto for the battle for fourth, while Pierre Gasly dropped from fifth to eighth with two laps remaining, losing out to Norman Nato and Robert Visoiu.

If Vandoorne was disappointed at missing the win to his teammate, he can take solace in an expanded lead in the drivers’ championship: the Belgian now leads Haryanto by 194 points to 109, while Rossi’s non-scoring weekend sees him stranded on 105 points, just ahead of Sirotkin on 103, with Alex Lynn on 85 points to Gasly’s 61, Marciello on 58 and Matsushita on 48. In the teams’ title ART Grand Prix have eased away from DAMS by 242 points to 146, with Racing Engineering on 131, Campos Racing on 130 and Rapax on 121 as the grid escapes for the summer break ahead of the next round at the fabled Spa Francorchamps circuit next month.