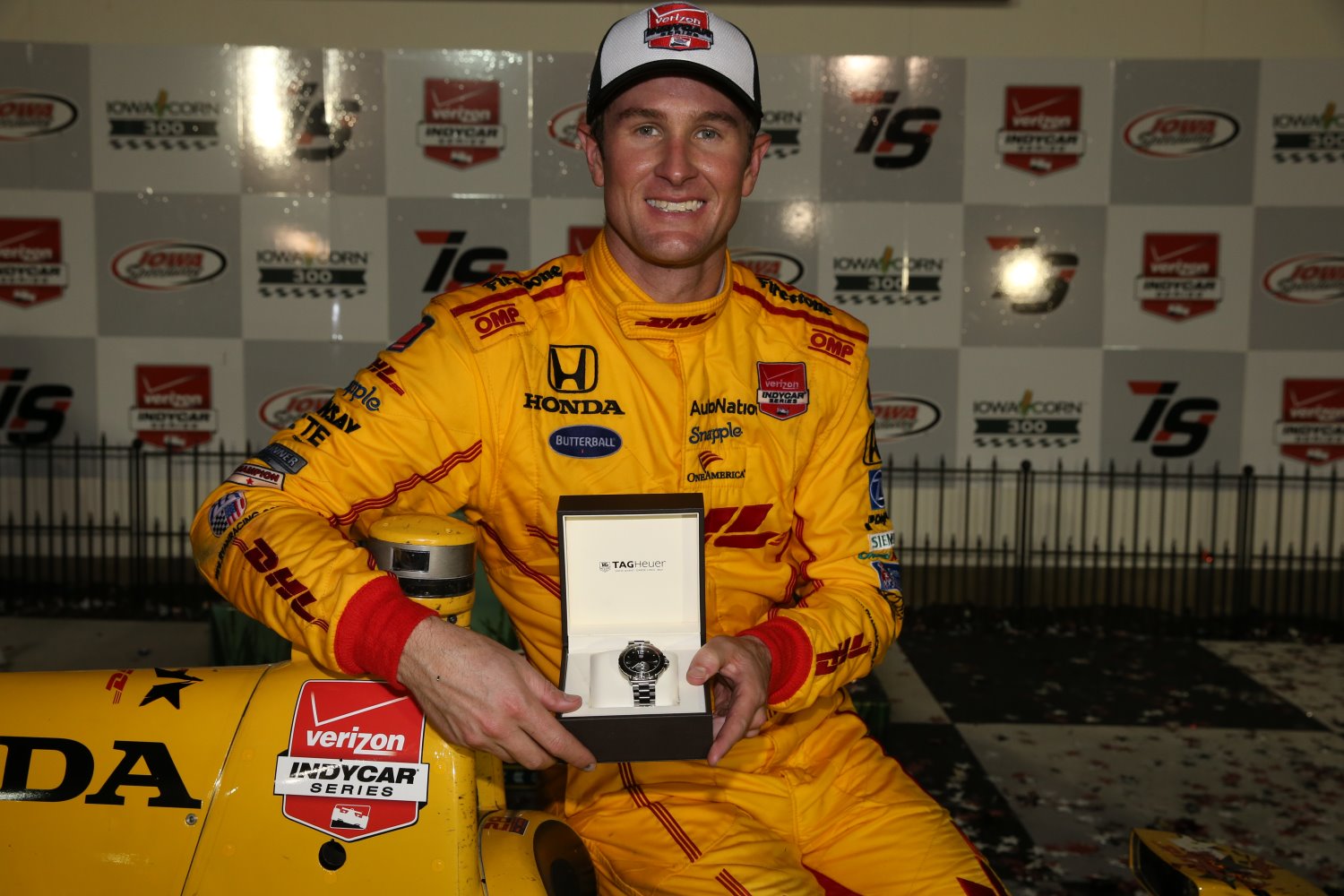 As you know by now, Ryan Hunter-Reay won an exciting Iowa Corn 300 last evening at Iowa Speedway. It was the 2012 champion's first win of 2015, and third win in his last 4 races at Iowa. Of course, Iowa is not the only short oval Hunter-Reay has excelled on, as the driver of the #28 DHL Honda has won 6 of the last 9 short oval races dating back to Loudon 2011. Very impressive.

AR1 was at Iowa Speedway this weekend covering the happenings. With the "romantic cornfields" as one journalist calls them well in our rearview mirror, we will pass along a few items we were unable to get to this weekend.

The big talk after the race was the Sage Karam/Ed Carpenter scrap. We'll discuss that a little later in the week. For now, we did some digging into the Silly Season for 2016.

We didn't get to talk to all the parties we wanted. However, barring an out-of-nowhere announcement a la Juan Pablo Montoya to Team Penske two years ago, our initial impressions are we don't believe there will be a lot of movement this offseason.

In essence, there aren't exactly a lot of desirable seats to chase after.

Now, we do know two desirable drivers – Josef Newgarden and Sebastien Bourdais – are free agents. We didn't get to speak with Newgarden but ran into Bourdais yesterday after he had to abort his qualifying effort due to a spin. Acknowledging he made a mistake, the Frenchman seemed rather relaxed about his future. Although he has yet to resign with KVSH Racing, he is very happy with the team, and noted that he believes that is where he will be.

As for the KV racing Technology portion of the stable, we spoke with Bourdais' teammate Stefano Coletti Friday.

President of A.J. Foyt Enterprises, Inc. Larry Foyt spent some time chatting with us around lunchtime yesterday, and we asked if the team planned to continue with Jack Hawksworth and Takuma Sato. "I think so," said the son of the four-time Indy 500 winner noting that he had options on both drivers for 2015. Foyt did say that it has been a tough year for the team and that Hawksworth for one has been frustrated. But "it hasn't been all his fault," said Foyt. The general impression we got is that the team thinks a second year with this lineup will be beneficial.

We also caught up with 2014 Indy Lights Presented by Cooper Tires Champion Gabby Chaves. Chaves said he has yet to sign for 2016, but said the team was beginning to gel and that he believes there is a good chance he would be back in the #98 Honda.

Again, we don't see a lot of dominoes falling. It's shaping up to be a not-so-silly Silly Season.

Get this: in the 8 races, since Will Power won the Angie's List Grand Prix of Indianapolis from pole, no driver has won a race from a starting position higher than 7th. Power by the way is the only driver to win from pole this season. Here is a list of winners and starting positions since the Indy GP:

Now why exactly qualifying has meant so little of late? Well, two of those races were rain affected and Fontana didn't really place a premium on qualifying. As for an overarching thesis explaining the trend: we don't really have one.

We hope you enjoyed our coverage of the Iowa Corn Indy this weekend. Brian Carroccio will have a postscript at some point later in the week.