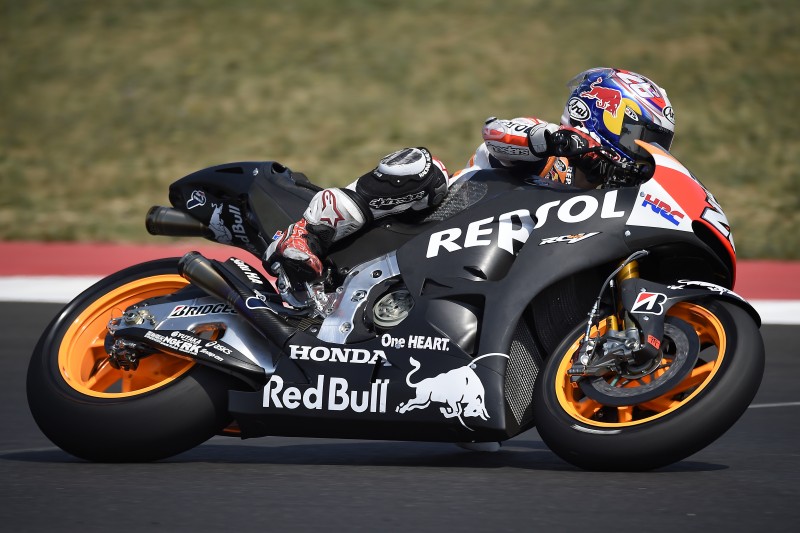 Tomorrow is the final day of testing and both riders will focus on the 2016 tire manufacturer.

Marc Marquez
1’32.00 [86 laps]
"I’m happy with these past two days, we have done a great job on the setup and now I feel more comfortable. Especially this morning when the temperature was a little bit lower we were able to find something that has improved my feeling and now we will have to see if this will work also in the coming circuits. I also tried the 2016 prototype finding something good, but we will test it again tomorrow with next year’s tires to give the HRC engineers more data to work with. In the afternoon the track temperature was really too hot, but I am happy with the pace I was able to keep even in these circumstances. A big thanks to HRC and my team for the great job done! Tomorrow one more tough day and then we will deserve some days off!"

Dani Pedrosa
1’32.66 [71 laps]
"It’s been two hard but productive days of testing. We are happy as we have been able to work a lot on the current bike to find a setup that can be a good base for the coming GPs. It has been a very hard job as the temperature was really hot but I am happy. I also did a couple of exits with the prototype of the 2016 bike. It was important to give to the engineers some feedback about the direction we are heading. Tomorrow we will test it again with 2016 tires as this bike will have to work on them!"

Location Information
Close to the city of Rimini, the Misano Adriatico circuit was constructed in 1972 and has since undergone an array of modifications. A regular scene for Italian Grands Prix throughout the 80s and early 90s, Misano returned to the MotoGP calendar in 2007.