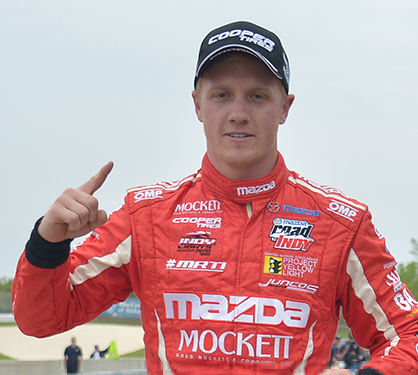 West Allis, Wisc. (14 July 2015) Racing on an oval that has seen drivers carve their names in IndyCar history for decades, young Spencer Pigot had high hopes as the Indy Lights presented by Cooper Tires rookie prepared for his debut on the Milwaukee Mile this weekend.

Pigot, who won on oval, road and street courses on his way to the 2014 Pro Mazda Championship, was looking to make the most of his first run on the fabled track as he targeted more momentum in the Indy Lights Championship. Racing with the all-new Mazda-powered Dallara IL-15 for Juncos Racing, Pigot has a series-high four wins to his credit in his first season of Indy Lights competition.

The Milwaukee round is one of three oval outings for the series, with the Freedom 100 in May and next weekend's Iowa visit keeping the Indy Lights drivers on their oval game as they all look to find a future in the Verizon IndyCar Series.

Pigot made a strong case for his oval accolades as he opened the weekend with the third fastest time in practice in his Juncos Racing-prepared Dallara-IL-15 Mazda with a quick lap time of 147.048-mph. He raised the ante in qualifying, smashing the track record with his two-lap average of 150.868 mph to score pole position for Sunday's 100-lap race. The record run not only earned him a great starting position, but it also netted one point in a highly competitive championship

"It's very important because the top three are very close in the championship, said Pigot about the bonus point for qualifying. "We've been studying a lot of things that we learned in May and that we've learned testing here at Milwaukee and Iowa that will help us on the ovals. Obviously the hard work is paying and it is showing here in qualifying. We'll see if we can do it when it matters tomorrow."

When the race went green, Pigot had to cede the lead to fellow American RC Enerson, whose Schmidt-Peterson car bolted to the front. But the 100-mile race was a long one, and Pigot worked some patience as well as pace, setting the fastest lap of the race while he looked for a way to find his way back to the front of the Indy Lights field once again.

Unfortunately, he never got that chance as he had to make a fast recovery from the sudden loss of fifth gear. After losing a handful of positions, Pigot was able to get back into a race rhythm, but without the critical fifth gear, had no way to fight his way back to the point as he finished seventh, still on the same lap as the leader.

"The weekend started off on a good note for us and the car was great in qualifying," said Pigot. "It ran really well at the beginning of the race and I thought we would be able to challenge RC (Enerson). He (RC) had a great start getting passed us and unfortunately I lost fifth gear. After that, I just had to hang on until the end. I want to thank Juncos Racing, Mazda, Cooper Tire, Mockett, Rising Star Racing, The Stutz, MOBE and BAD for all of their support. I'm excited about the pace we had with the Juncos car all weekend and hopefully we can be strong again in Iowa!"