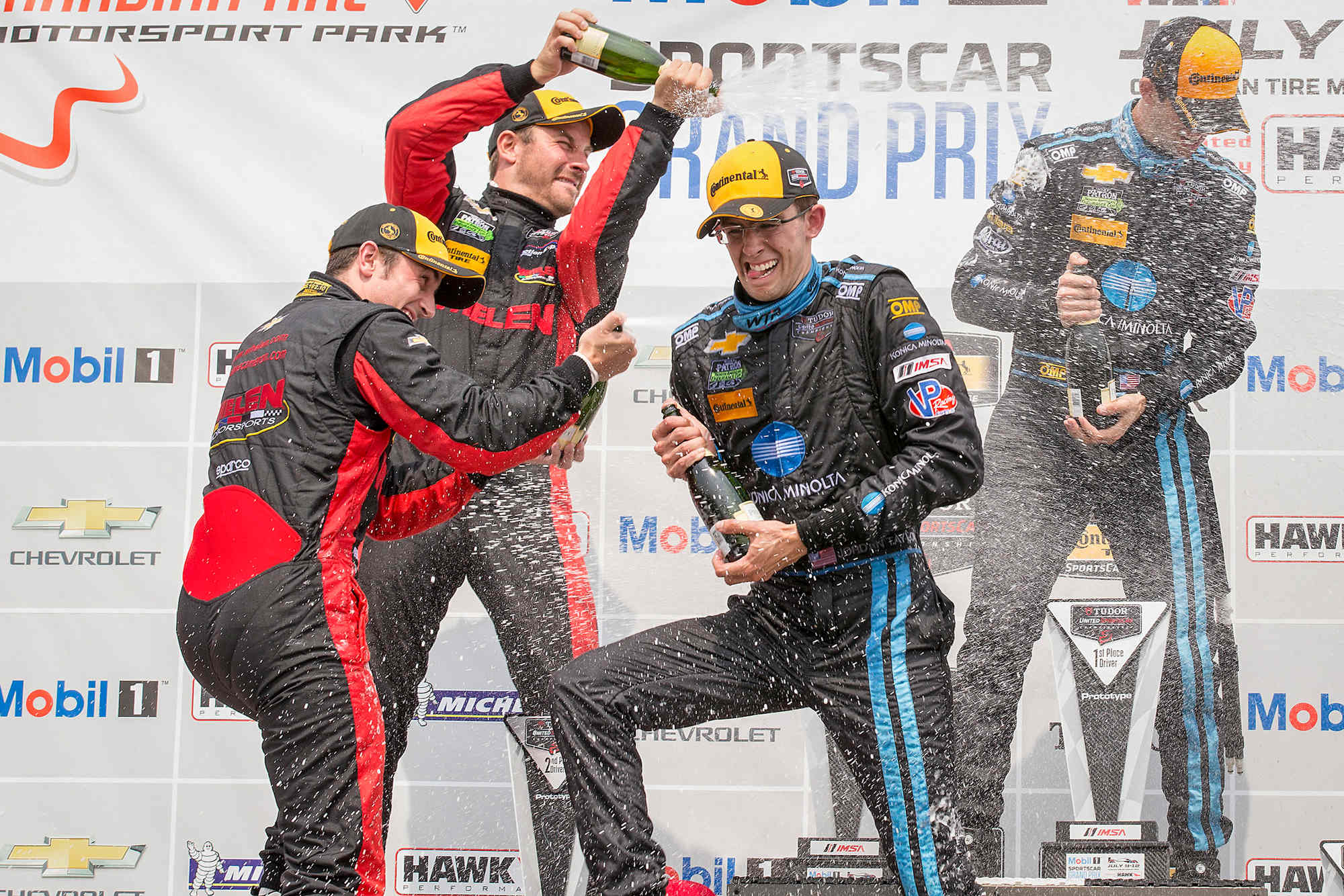 Jordan Taylor overtook late-race leader Dane Cameron to win the Mobil 1 SportsCar Grand Prix presented by Hawk Performance at Canadian Tire Motorsport Park by less than a half-second in the only appearance outside the U.S. for the TUDOR United SportsCar Championship.

Taylor co-drove the No. 10 Konica Minolta Chevrolet Corvette Daytona Prototype with his brother, Ricky, for the Wayne Taylor Racing team owned by their father. Second was Cameron and co-driver Eric Curran in the No. 31 Whelen Action Express Corvette DP. Third was the Honda-powered Ligier Prototype of John Pew and Oswaldo Negri, Jr. It was the second win of the season for the Taylor brothers.

Curran and Cameron had a tire problem half an hour into the race, requiring a pit stop that through the team’s strategy off, which wasn’t necessarily a bad thing until the end, when Cameron needed a splash of fuel to make it to the checkered flag.

It wasn’t easy for the No. 10, though, as the Taylor car had a serious power steering problem that caused the steering to lock up, dropping the team to near the back of the field.

“I was preparing for a long, miserable day," Jordan Taylor said. But running more conservatively, plus dialing down the amount of power steering boost from a cockpit control, restored most of the power steering and the team began advancing towards the front.

Even after taking the lead when Cameron made his late pit stop, Jordan Taylor had to keep the hard charging No. 31 machine behind him over the closing laps.

“We were flat out, every single lap, pushing and pushing," Jordan Taylor said.

Colin Braun and Jon Bennett won in the Prototype Challenge class, driving the No. 54 CORE autosport ORECA-Chevrolet. Though the team was and remains in the points lead, they haven’t won this season, and Bennett and Braun said it was good to get the monkey off their back. “It was a big exhale this weekend," Bennett said, “to achieve the results we knew we were capable of."

Second in Prototype Challenge was the Sean Rayhall/John Falb BAR1 No. 16 car, followed by Matt McMurry and Canadian driver Mikhail Goikhberg in the No. 85 in the JDC/Miller entry. Braun also had power steering problems in the winning No. 54 car, “and Colin had to muscle it though for the last 60 minutes," Bennett said.
In the GT Le Mans class, the winner was the No. 911 Porsche factory-backed 911 RSR of 24 Hours of Le Mans winner Nicky Tandy and co-driver Patrick Pilet. John Edwards was 15 seconds back in second, driving the No. 24 BMW Team RLL Z4 GTLM he shared with Lucas Luhr. Third was the Corvette Racing Chevrolet No. 3 Corvette C7.R of Jan Magnussen and Antonio Garcia.

The No. 911 car, which qualified on the pole, has been competitive all season, but didn’t have the results to show for it until this race. “We’ve had so much bad luck this year," Pilet said.

“We clearly the best car all weekend, a testament to what the 911 crew has done," Tandy said. “We kept to our strategy, did our two scheduled pit stops – it went how you want every race to go."

Twenty-three cars started, and only one officially retired before the end of the two-hour, 30-minute endurance race. Next up for the TUDOR United SportsCar Championship: The Northeast Grand Prix at Lime Rock Park in Connecticut July 24-25.