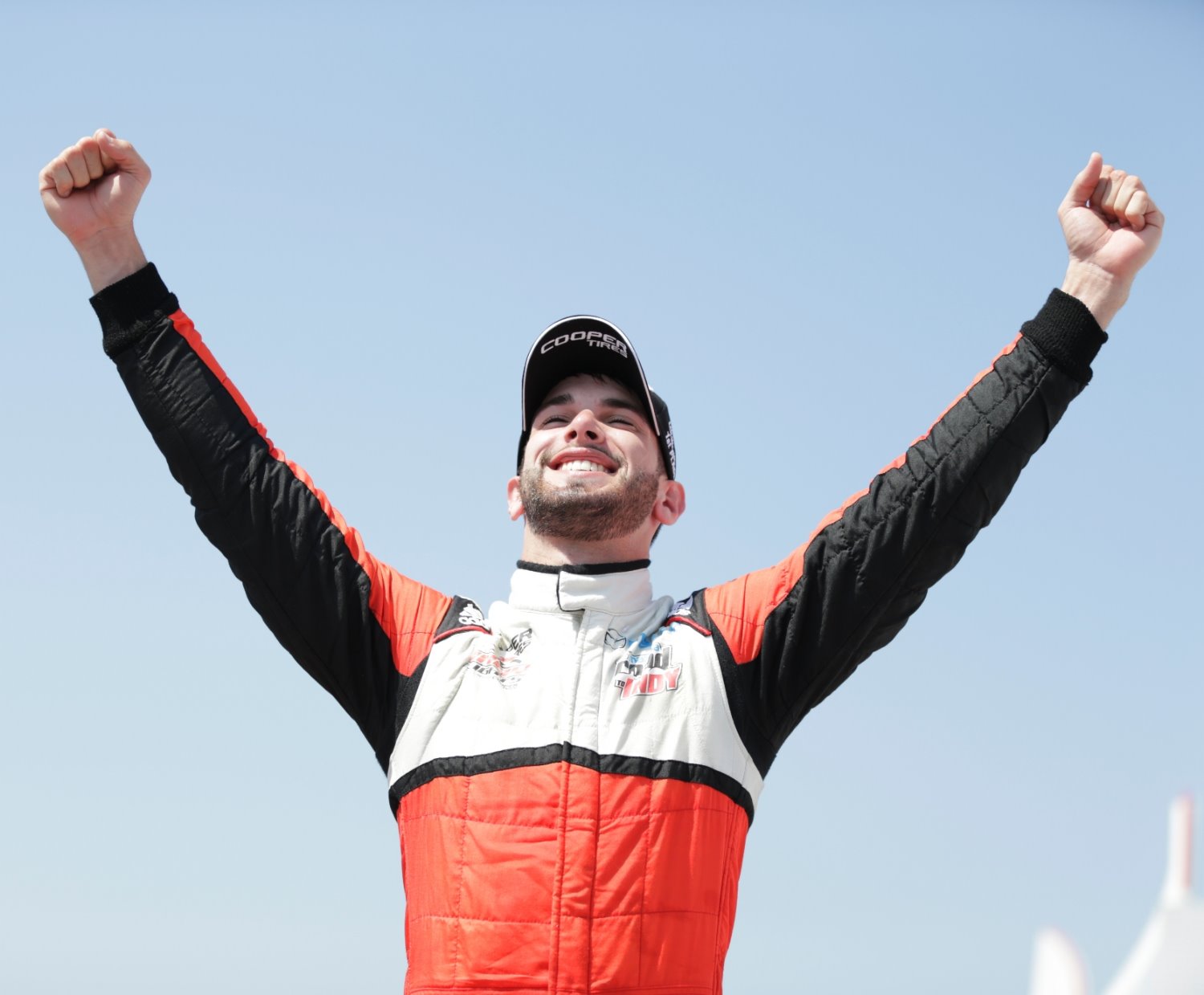 Passing on the slick and tricky Milwaukee Mile is supposed to be difficult, but don’t tell Grand Prix of Milwaukee winner Felix Serralles that. The Belardi Auto Racing rookie started his second Indy Lights Presented by Cooper Tire oval race from the outside of the third row and was able to pass five cars on the way to his first Indy Lights victory. The bevy of passes by the Ponce, Puerto Rico native included a multiple lap side-by-side battle with RC Enerson for the lead of the race with only eleven laps remaining.

With the victory, the seventh in the history of Belardi Auto Racing, the team became the fifth Indy Lights team to score a victory during the maiden season for the brand new Mazda powered Dallara IL-15. Serralles joins Gabby Chaves, Alex Baron and Peter Dempsey as winners for the squad led by Brian Belardi, who was on hand for the victory celebration.

The initial battle between the rookie front row of Spencer Pigot and Enerson foretold of the close racing that would occur throughout the field during the 100-lap battle on the historic one-mile oval.

Enerson, the 18-year-old Schmidt Peterson Motorsports with Curb-Agajanian pilot was able to stay side-by-side on the high side of Juncos Racing polesitter Pigot for the first two laps. Pigot and Enerson went side-by-side for another two corners before the front end of Pigot’s car washed out at the exit of Turn 2, placing the No. 7 machine of Enerson out front for the first 88 laps.

The race settled into a rhythm after the hectic opening stanza until Juncos Racing’s Kyle Kaiser brought out a caution on Lap 46. While running in the third position, the 19-year-old rookie got loose in Turn 4 and almost pulled off a miraculous save before lazily looping the No. 18 at the exit of Turn 4. The Santa Clara, Calif., native kept the No. 18 Juncos Racing car off the wall and was able to remain on the lead lap. The No. 4 of Serralles was just able to squeeze inside the spinning car as the track went yellow for the first and only time during the race.

Not long after the field went back to green on Lap 50, Pigot, who was running in second lost fifth gear and fell back to seventh place. The championship contender and reigning Pro Mazda champion was able to hold station over Ed Jones of Carlin and nursed the No. 12 Juncos Racing home only three spots behind championship leader Jack Harvey.

Harvey, whose Schmidt Peterson Racing Steps Foundation-backed No. 42 crossed the line in fourth place, extended his slim points lead to 14 points over Pigot and 29 points over Jones.

Juan Piedrahita, of Bogota, Colombia, joins Sage Karam as the only drivers with a matched set of Milwaukee trophies from all three rungs of the Mazda Road To Indy. The third-place hardware he earned today with Belardi Auto Racing will sit beside his third-place Cooper Tires USF2000 Championship Powered by Mazda trophy (2011) and second-place Pro Mazda trophy (2013).

Scott Anderson, who damaged his No. 77 Schmidt Peterson Motorsports entry only four laps into the weekend’s first practice session was able to recover admirably and come home in fifth spot.

Formula 1 veteran Max Chilton was the early mover. The 24-year-old Carlin pilot started in the tenth spot and by Lap 3 had moved up to eighth. He was able to gain two more positions to finish his first oval race in sixth. An impressive result considering the factory Nissan driver was the only driver to not test at Milwaukee in May, turning his first laps on the West Allis circuit on Saturday.

The 88 laps led by Enerson were the first laps the he has led in Indy Lights.

Serralles took home the RePlay XD Move of the Race for his pass on Enerson.

Indy Lights will be back on track next weekend (July 11-12, 2015) with Pro Mazda and the Verizon IndyCar Series at the Iowa Speedway 0.894-bullring in Newton, Iowa.

Felix Serralles, #4 S&S Tire – Belardi Auto Racing: "When we went out in qualifying I thought that we didn't try hard enough, but I was really confident that we would have a really good race car. It's only my second oval race in my life and I'm still not used to certain lines that I have to take. As soon as I got comfortable and I started being consistent, I realized that the car was quite stable and that's just how you have to drive it. The team gave me a really good race car."