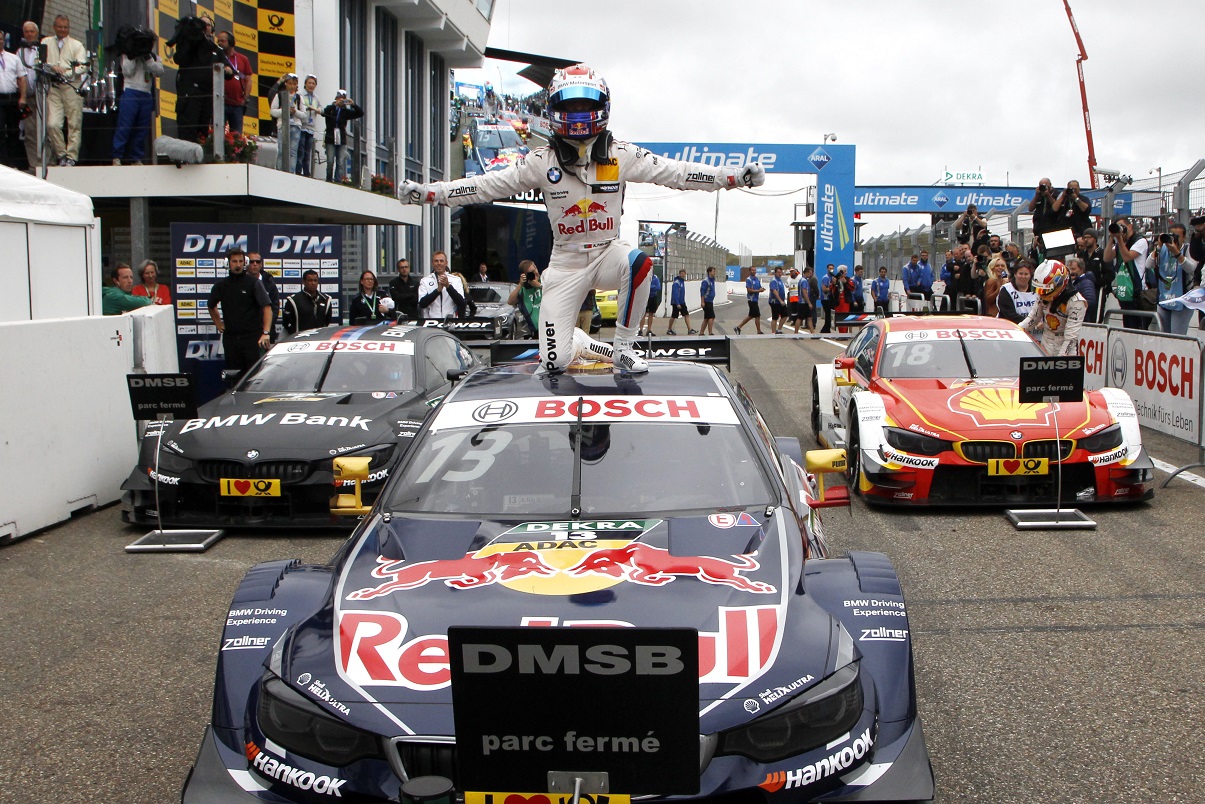 Only three hours after his maiden pole position in the DTM, the first victory followed: in a dominant way, BMW driver AntÂ¢nio Félix da Costa drove from pole position to his first major success in the most popular international touring car series, an undisputed victory. The Portuguese, who is only in his second DTM season, had to wait for this moment for 17 races. In the first race on Saturday, he had already scored his first-ever DTM podium finish by coming home second. “I am really, really happy," the buoyant winner said after the race. “We had a good strategy and my colleagues put on a lot of pressure from behind. I always tried to have a sufficient margin before the first corner, because that is a very good possibility to overtake. That worked out. My first victory is simply great!"

Félix da Costa not only scored the first win for himself, but also the maiden victory for a Portuguese driver in the DTM. His predecessors Ni Amorim, Pedro Lamy and Filipe Albuquerque hadn’t managed to pull this off. “Incredible what AntÂ¢nio has achieved this weekend," his BMW Team Schnitzer team principal, Charly Lamm, praised him. “He deserves huge respect, I am overjoyed."

BMW will keep the fourth race weekend of the 2015 season at Zandvoort in its memory for a long time. After the lock-out of the first seven places on Saturday, another success with five cars on the top five positions followed on Sunday. Together with the winner, Augusto Farfus and Bruno Spengler stood on the podium for the prize-giving ceremony. Timo Glock and Marco Wittmann rounded out BMW’s successful performance in fourth and fifth place. “A fantastic result," BMW Motorsport director Jens Marquardt delighted. “Our start of the season wasn’t good and we worked hard to change this. But the season is still long and there is plenty of work for us to do."

Behind the first five places, there was a duel between Pascal Wehrlein and Mattias EkstrÃ¶m for sixth place. Audi driver Mattias EkstrÃ¶m had made good progress from 16th on the grid and particularly put sixth-placed Mercedes-Benz driver Pascal Wehrlein under pressure in the closing stages, but another position improvement wasn’t on the cards. “After contact with Molina, I had problems with the steering. I am all the more happy to have brought sixth place home," Wehrlein said. “At the start, I had some problems again. I am lacking some feeling for the clutch. That is too bad, because, of course, I want to make up positions from the very beginning."

Sixth at the finish, Wehrlein was the best-placed Mercedes-Benz driver while EkstrÃ¶m scored the best result for Audi by finishing seventh. EkstrÃ¶m: “We had a problem in warm-up, which wasn’t particularly helpful for qualifying. 16th place on the grid was the result and of course not the best position to start from. From that point of view, I can be happy with the result. As far as the drivers’ standings are concerned, consistently scoring points is important and I did very well with that. I was faster than Wehrlein, but he didn’t make any mistakes and defended his position well." Both drivers aren’t unhappy with the result of the race, because their gap to points’ leader Jamie Green in the drivers’ standings was reduced to five points. EkstrÃ¶m and Wehrlein are tied in second and third place of the drivers’ standings. Green, who already scored three race wins this seasons, failed to score points on Sunday again as he finished 13th. After eight of 18 DTM races, Bruno Spengler currently is the best-placed BMW driver in the drivers’ standings. He is sixth with 52 points. “Today, my start wasn’t great and we had to wait after the pit stop to avoid a penalty. That is what the rules are like, they are the same for all drivers," the Canadian looked back upon his race. “Today, it was great fun and we hope that it continues like that in Spielberg." The other drivers to score points at Zandvoort were Christian Vietoris, Adrien Tambay and Gary Paffett in eighth to tenth place. For Tambay, ninth place is his best result of the season to date.