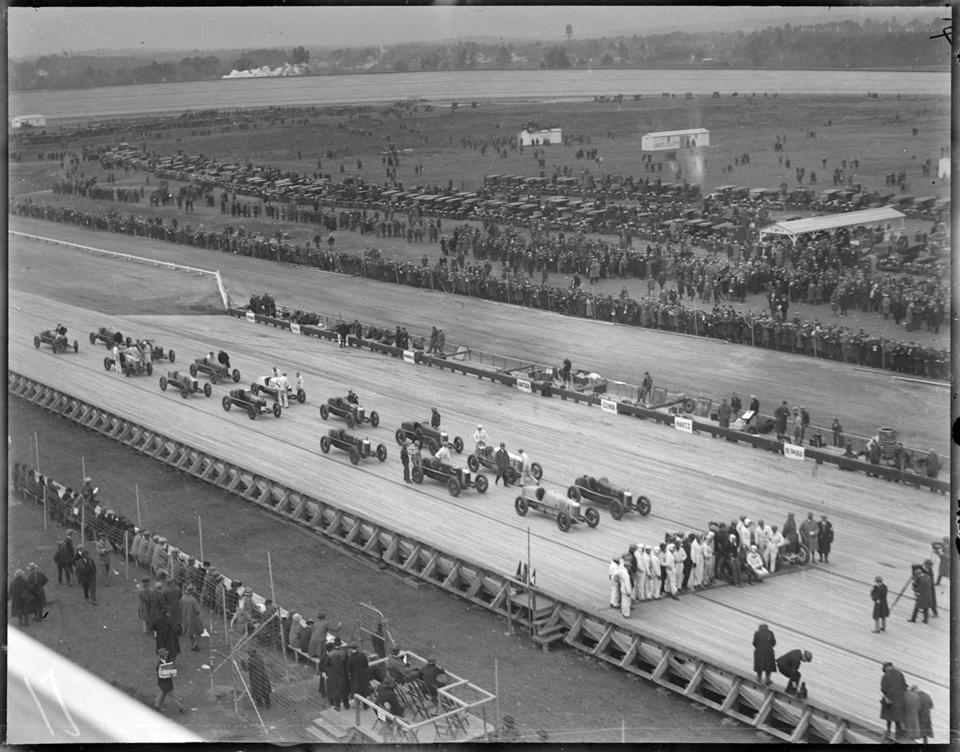 A crowd of 90,000-plus is expected to pack New Hampshire Motor Speedway next Sunday for a big NASCAR stop, this one labeled the New Hampshire 301. In September 2016, Indy-style racing will take over the Seaport’s streets, the first of five grand prix events scheduled to be staged here over Labor Day weekend through 2020.

Suddenly, we’re gearheads, eager consumers of all things cam shafts, fuel injectors, rack-and-pinion steering, and muscle-bulging V-8s (not the veggie variety poured from a can). We are Boston and we are full-out pedal to the metal, some of us so besotted by all of it that miniature checkered flags flutter from the back windows of our street machines.

But let’s throttle back here for a second. Let’s act like we’ve been here before — because we have been here before. Though it has been long forgotten, we were an original, bona fide hotbed of motor sports, dating to when the game was in its infancy, a time even before Henry Ford started mass producing his iconic Model T in 1908.

For better than 30 years, beginning in 1903, some of the world’s best auto racers performed regularly at a track in the Readville section of Hyde Park, sandwiched between Dedham and Milton. Opened originally as a horse venue just after the Civil War, Readville became a thriving harness track in the late 1890s, and the ponies remained popular there through the early years of the 20th century.

But when Americans rapidly hitched their wagons to a whole different kind of horsepower, Readville soon became far better known for its car and then motorcycle races. By the end of the 1920s, in fact, horse racing was a non-starter at Readville, the 1-mile oval by then fully embraced as the place where Bostonians came to witness the motor industry develop before their eyes, one lap, one race at a time.

“A perfect example of changing consumer tastes,’’ noted Boston’s own Robert Temple, ex-race track reporter and author of the book, “The History of Harness Racing in New England." “Harness racing had a great run at Readville, with some of the best horses and drivers in the country. But when the cars came in — at first using the same track as the horses — it was over.

“America was moving on.’’

A four-paragraph story in the Globe, published April 5, 1903, carried the headline, “Memorial Day Will Bring Out Big Entry of Fast Machines at Readville Race Track.’’ The track’s first motor races, it promised, would “compare with any yet held in this country’’ with “reason to believe that the most famous speed machines of this country will be there.’’

In September 1914, another Globe story carried details of the first motorcycle races at Readville. “Motorcycles Whizz’’ was the headline. A crowd of 3,000 witnessed “the little machines eating up the stretches [of the track] at nearly a mile-a-minute clip.’’

Readville’s event card in 1914 wasn’t fully gas-powered. One race that September, in fact, had riders furiously pedaling their “high wheelers,’’ the oversized and awkward bicycles of 1870s vintage. The throwback event of some four decades carried spectators to a time when the fastest things on wheels were coal-powered trains and horse-drawn wagons.

“Their speed in contrast to the motorcycles,’’ noted the Globe reporter, “was amusing.’’

If they roll the calendar back 40 years next Sunday for the New Hampshire 301 in Loudon, it might mean a rally of ’75 Mustangs, each with cassette players booming “Nights in White Satin.’’ At least we were beyond 8-tracks by then.

In October 1920, the motorcycle races were back in Readville and a crowd of 10,000, three times the size of original grandstand capacity, watched Los Angeles’s Ralph Hepburn rocket his Harley-Davidson around the track. He won a 10-miler and also “carried away the bacon in the 25-mile race,’’ noted the Globe.

For an auto race in August 1932, the horses already out of Readville for some 5-7 years, the Globe reported the track to be “in the pink of condition’’ and well-suited to “dare-devil driving.’’ The track had been upgraded with banked turns and the surface was hard-packed clay, material shipped across town after construction workers excavated it from the new Sumner Tunnel.

The Globe also noted in 1932 that a “special oil’’ was used to saturate the Readville track, a welcomed remedy to the oft-choking, blinding clouds of dust that billowed from the horse track’s original surface.

Two of the better-known riders at the ’32 race were Detroit’s Gene Haustein, who drove a Fronty Special, and Indianapolis’s Joe Russo, pilot of a Duesenberg Special. Russo, known for his stunt of driving around Indianapolis Motor Speedway while blindfolded, was killed in a 1934 race in Bristol, Pa.

With World War II advancing, and consumer tastes continuing to evolve, Readville closed shop with its last auto race in 1937. According to Walter “Bud" Barrett, who self-published a book about the Readville track’s history, racing was no longer economically viable because, in part, the vast acreage offered so many entry points that most attendees never paid for admission.

“I went to the final car races, in 1936 and ’37,’’ recalled Barrett, who was born in June 1925. “With all the track improvements they made, they were hitting the backstretch at 95-100 miles an hour. They came across that finish line like a bat out of hell.’’

The track and grandstand are long gone, a nondescript warehouse today filling some of the space. A few years ago, Temple and Barrett worked diligently to make and install a commemorative Readville plaque that now rests at the edge of the grounds. It’s the only trace of what was a thriving, thrilling business.

“I’m 90 years old, an old geezer,’’ a boisterous Barrett said the other day over the telephone. “If someone drove by there today, they’d have no idea it was ever there. But I’m telling you, it was something to see.’’

We’re Boston. We’re all about cars. And it’s not our first time around the track. Kevin Paul Dupont/Boston Globe