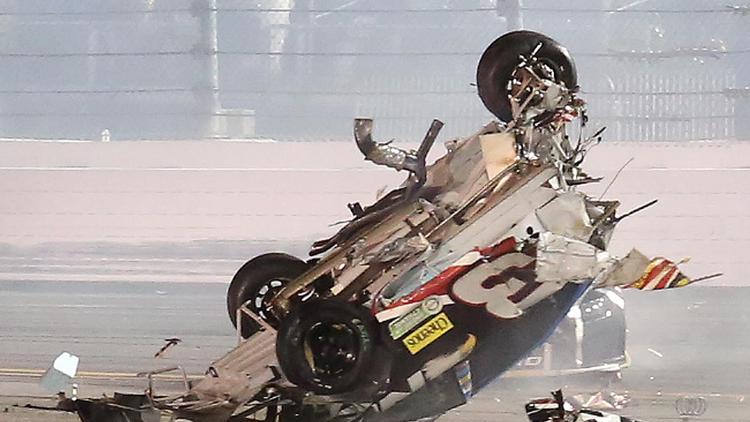 Jeff Gordon's final run at Daytona was something he'll never forget. Neither will anybody else involved.

Gordon, who will retire from fulltime racing at the end of the season after 24 years in NASCAR Sprint Cup, finished sixth Monday morning in the Coke Zero 400, the last of his 46 races at Daytona International Speedway's 2.5-mile tri-oval.

But after he crossed the finish line, a chain-reaction crash pushed Austin Dillon's car into the back of Gordon's car, sending Gordon sliding sideways. Dillon's car became airborne behind Gordon and slammed into the catchfence, destroying the car and a portion of the fence and sending debris flying into the crowd. Dillon emerged from the terrifying scene with only a bruised tailbone and bruised forearm, but five fans were treated for minor injuries.

"That is why we love our fans," Gordon said. "They came here to see some crazy, wild stuff and we are going to give it to them. I'll tell you, on that last lap, nobody is lifting. … There is nobody letting out of the gas. Unfortunately, this is the result of it."

The crash drew criticism of NASCAR's restrictor-plate races held at the series largest superspeedways, Daytona and Talladega Superspeedway. The cars' speeds are governed, forcing the drivers to race close together in large packs. The format often leads to violent, multicar crashes.

"It is literally like a video game out there these days, except for its real life," Gordon said. "It's crazy. It's really crazy. I love Daytona. This place has been amazing for me. I can't believe this is my final race here, but after going through that experience I'm glad I only have one more restrictor-plate race left."

Gordon, who won the Daytona 500 three times and the track's second race — usually held on Fourth of July weekend — three times, received a warm welcome from the crowd during driver introductions before the race. He started 24th after qualifying was canceled because of inclement weather Saturday and the starting grid was lined up according to speeds from Friday's first practice session.

After rain delayed the start of the race until 11:42 p.m. ET, Gordon raced as high as third after a restart on Lap 92 of the 160-lap race. He then fell out of the top 10. However, Gordon roared back and found himself in fourth place after a pit stop on Lap 110. Once again, he got shuffled back to 15th by Lap 120.

By Lap 145, however, Gordon had moved with the inside line back into third place, trailing only Hendrick Motorsports teammates Dale Earnhardt Jr. and Jimmie Johnson. Earnhardt won and Johnson finished second while Gordon crossed the finish line in sixth, his best finish at Daytona since a fourth-place effort in the 2014 Daytona 500 and his best finish in this race since a sixth in 2011.

"This is the best finish I've had here in a long time, so I'll take it," he said. "But I just hate to see it finish that way."

Despite a winless streak at Daytona that's covered more than 10 years, Gordon's statistics at NASCAR's premier track are impressive. In his 46 races at the track, he finished in the top 10 45.7 percent of the time, accumulating more than $11.6 million during that period.

"This track is extremely special to me," Gordon said Saturday after qualifying was canceled. "Of course we all know how much this track means to our sport. … I don't think it's really going to hit me until we get further down into the final part of the season, but this place has meant a lot. It's going to be tough not coming back here and being behind the wheel."

"It's hard for me to really put all those thoughts and feelings into perspective, knowing that I have half the season still to go," Gordon said. Jeff Olsen/USA Today