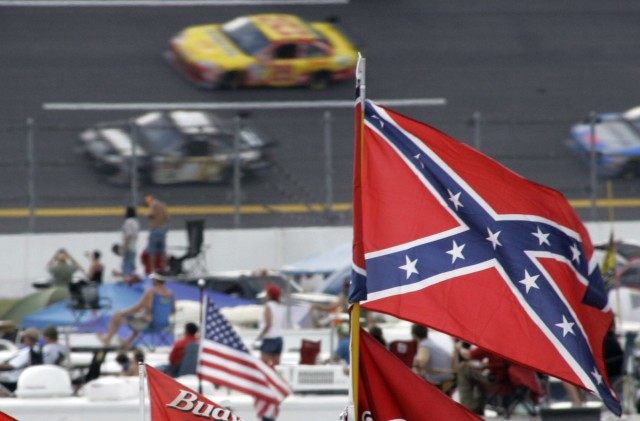 UPDATE #2 Daytona didn't get any takers on its offer to exchange Confederate flags at its concession stands. The NASCAR fans have spoken.

07/06/15 Confederate flags were out in droves at Daytona Speedway this weekend as NASCAR fans basically told NASCAR where to shove their idea of taking down all Confederate Flags. (See story)

NASCAR fans at Daytona this weekend when asked about their Confederate Flag after NASCAR called for removal of the flag, a big part of its history:

"Why should the Charleston shooting cause this controversy?" Glenn asked. "If the guy had been holding a Bible, would everyone want to ban a bible or something? Where does it stop and common sense take over a little bit?"

Said Gerry: "We're not doing it for hate, but we do have rights. This is because we have one idiot that held the Confederate flag instead of the American flag or the bible. The flag didn't hurt anybody. It's just like trying to outlaw guns. It's not the guns that do the killing, it's the idiots that shoot them. The rebel flag don't mean any hate at all. It's just I like it. I have a rebel flag bathing suit as a matter of fact. Are they going to make me take it off if I put it on?"

Jack added, "ISIS and the rest of the terrorists kill innocent people in the name of God. I guess we should ban God."