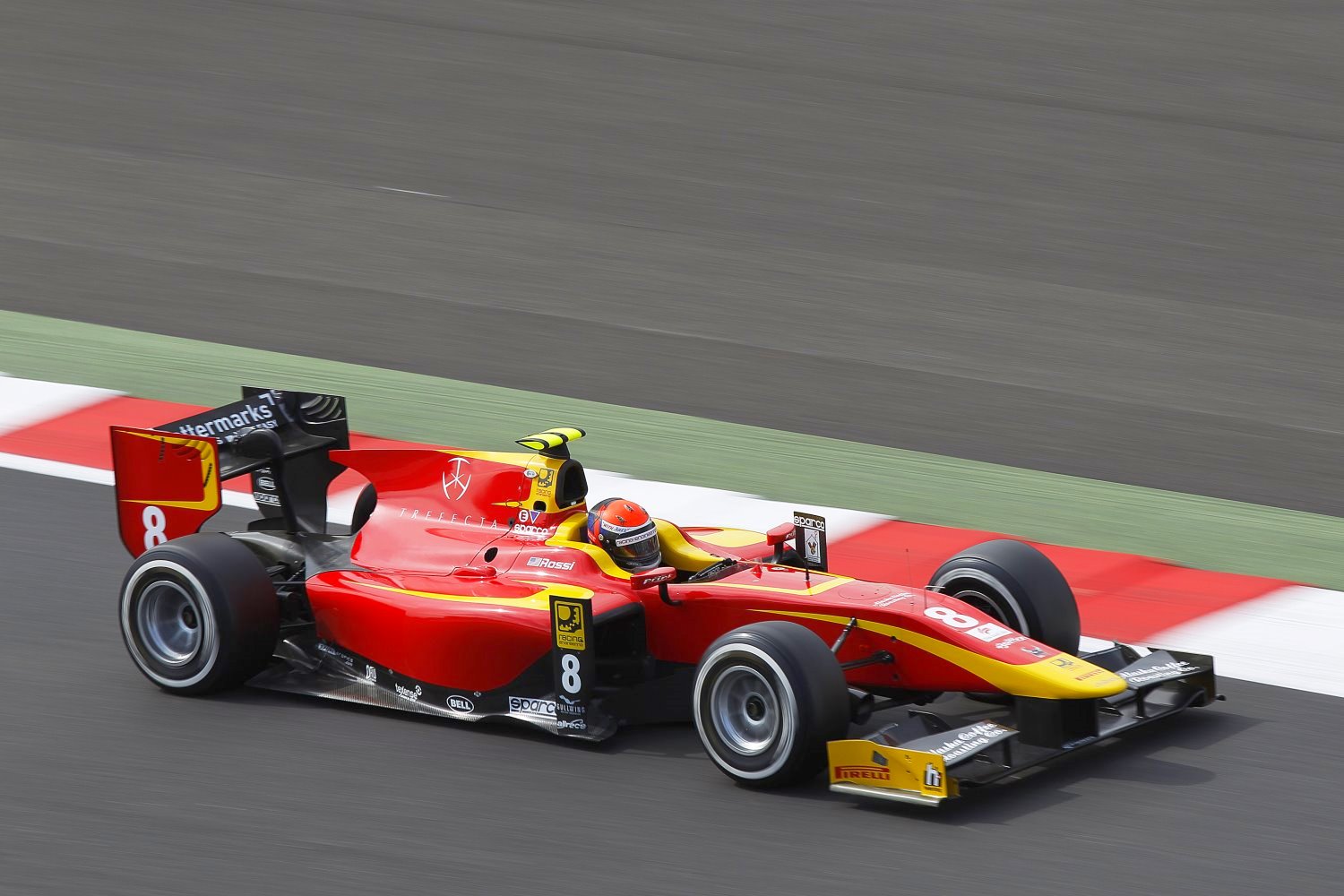 Alexander Rossi once more showcased his race talent and consistency as the GP2 Series season ranking battle continued in Silverstone, set against the backdrop of the classic British Grand Prix. A phenomenal drive saw him finish the main GP2 Series Feature Race in second place after some sensational overtaking maneuvers, and further points in the Sprint Race ensure that Alexander remains in P2 in the driver rankings, with the gap to Stoffel Vandoorne closing.

The sun was out at the classic British circuit for the first day's running, with air and track temperatures of 21Â°C and 41Â°C respectively for the 45 minute morning practice session. Alexander was once more one of the first to take to the track, and immediately set the pace on his first flying lap, with a 1:41.290s, setting the bar high for the rest of the field. After a few adjustments, Alexander then improved to 1:40.924s before focusing on longer runs and finishing free practice in 5th place.

The 30 minute afternoon qualifying session was met with similar conditions to those in the morning with air and track temperatures of 24Â°C and 40CÂ°, with all cars running on the softer Pirelli P Zero White medium compound tires as they fought for their grid positions ahead of the Feature Race. Alexander was flying from the start, setting a pace of 1:40.968s as his initial lap. Following a few more set up changes, Alexander returned to the track with ten minutes left to go, and improved on his time to bring home a 1:40.419s, putting him in 4th position and on the second row of the grid for the race ahead.

Saturday was another bright and sunny day for the 29 lap Feature Race, with air and track temperatures a higher 23Â°C and 42Â°C respectively. The temperature rose in more ways than one as the battle for the driver ranking continued. Alexander started on the Pirelli P Zero Orange hard compound tires, and as the lights went out he made a clean start. An incident further down the field caused the Safety Car to be deployed, however by lap three racing had resumed and Alexander immediately took the fight to his closest contender, Stoffel Vandoorne. By lap nine, Alexander had closed the gap and was right on the gearbox of the ART car, beginning to put pressure on the Belgian.

By lap 14 the battle for 2nd place intensified with Stanaway, Vandoorne and Alexander separated by less than a second. Keeping the pressure on, Alexander took advantage of Vandoorne running wide to pass cleanly and moved up to 3rd position, right behind Stanaway. Once more Alexander showed his class with a beautifully timed overtaking maneuver and moved himself up to second position, with the race win his aim. Sirotkin was eight seconds ahead, and on lap 20 Alexander took his mandatory pit stop. Another fantastic showcase of teamwork saw Alexander resume racing in 2nd place, and now closing the gap to Sirotkin. With six laps to go the time to the leader was 5.8 seconds, and with Alexander and Sirotkin setting identical lap times, the race came to a close with Alexander happy in second place and, crucially, ahead of Vandoorne in points towards the championship battle.

Sunday's race was far cooler with air and track temperatures of 16Â°C and 22Â°C and saw Alexander starting seventh in the field following the reverse grid line up. All the cars would race on the Pirelli P Zero Orange hard compound tires with the cooler weather making it harder to reach the required temperature. Alexander made another great start and was able to pass Vandoorne into the first corner. Turning into Copse, he was ahead of Yelloly and by lap 2 he was up to 4th as he completed a marvelous pass around the outside of Lynn. The Racing Engineering car quickly closed the gap to Gasly however it was announced that he had been given a five second time penalty for exceeding the track limits when passing Lynn.

With seven laps remaining Alexander was running 2.1 seconds behind Gasly however his time penalty meant he was effectively 7th. He continued to push and in the closing laps he was able to pull out a 5.6 second gap over Yelloly in 5th meaning the penalty did not affect his final position and – equally important – his Championship rival, Vandoorne, finished outside the points.

It has been another strong weekend for Alexander and the Racing Engineering team, showing tremendous race pace once again in both races. Alexander maintains his second place in the driver rankings but has closed the gap to Vandoorne and will look to improve on the series battle as the season continues. The next round of the 2015 GP2 Series will be at the Hungaroring from the 24th – 26th July.

Alexander Rossi: "I'm satisfied with this weekend's race performance since we missed bit on the options in Qualifying. It was good to show how fast our car is in terms of race performance, and I enjoyed the battles in both races. I’m happy with second this weekend and another podium, however I know the elusive wins are coming.

“The team did a perfect pit stop in the feature race and it's very positive to be able to finish ahead of Vandoorne in both races. We need to do more of that!"