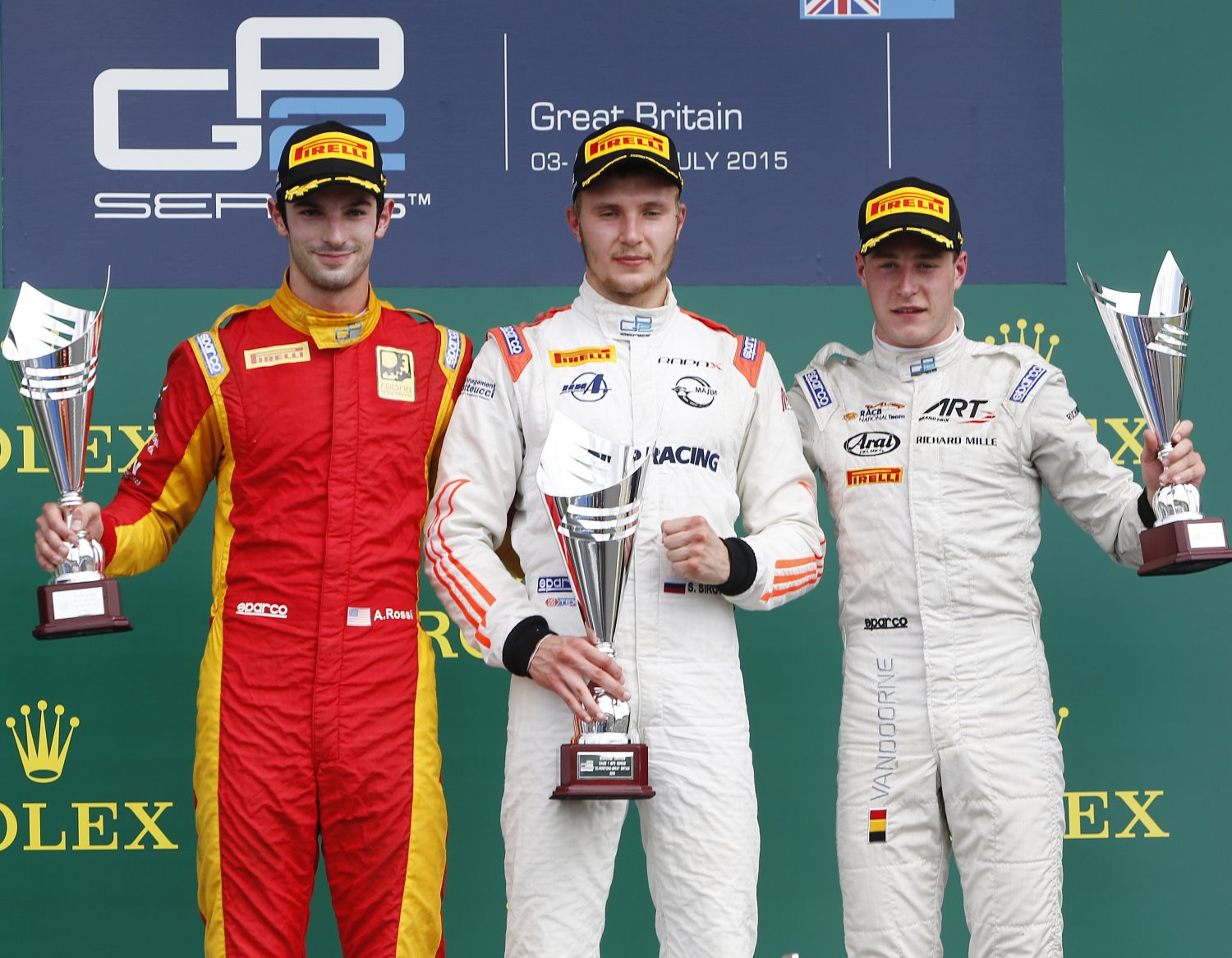 Sergey Sirotkin has claimed his maiden GP2 victory in emphatic fashion, blowing away his rivals with an impressive display of speed and nerve to reclaim the lead and power his way to the win, six seconds to the good from Alexander Rossi and series leader Stoffel Vandoorne.

The Russian made a slow getaway from pole: the Belgian got away better from second but Richie Stanaway got away even better from third, splitting the pair to lead into turn one, while behind them Rossi went wide and a fast starting Nobuharu Matsushita went even wider to claim P3 between Sirotkin and Vandoorne.

A brief safety car period for an incident between Artem Markelov and Nathanael Berthon gave the Russian the chance he was looking for: as the race went live he mugged Stanaway into the final corner, handing the Japanese driver a clean line through too while Rossi sat on Vandoorne’s rear wing and waited for his moment to shine.

The pair gained a place on lap 6 when Matsushita stopped with electrical gremlins as Nick Yelloly and Jordan King were the first of the soft shod drivers to make their pitstop, with King jumping his countryman in the process, giving the prime-shod drivers a target when their stops shook out.

Stanaway was soon struggling for pace, the head of a train with Vandoorne and Rossi in his wake, but the McLaren tester was slightly baulked into Village on lap 15, forced wide enough to give the American a ticket inside and through. Rossi wasn't resting on his laurels: next time through he made short work of Stanaway under the bridge, with the Belgian repeating the move on the next lap before leading the New Zealander into the pits.

Rossi and Sirotkin came in over the next 2 laps, with the Russian easily holding his lead over the American as both emerged ahead of King, but all eyes were on their rivals further behind: Pierre Gasly came out just behind Vandoorne on lap 21 after a lengthy battle with Arthur Pic, who came in next time through but lost time (and places) and emerged a few spots further back.

Stanaway’s tough race became terminal through a suspension failure with 7 laps remaining, while King was at the head of a train consisting of Vandoorne, Yelloly, Gasly, Alex Lynn, Oliver Rowland, Pic and Raffaele Marciello: the closing laps saw a frantic battle between them all while out ahead Sirotkin stretched away to an easy win, with Rossi and Vandoorne eventually joining him on the podium.

The remainder of the points-paying positions weren’t certain until the flag: Lynn pushed his teammate all the way to the line but it was Gasly who held on for P4, while Pic tried to overtake King into the final complex but couldn’t quite make it before tapping the Englishman into a spin on the final corner, who was unable to get going again. Behind Pic was Marciello, who mugged Yelloly on the penultimate corner, with Rowland finishing in the points on his debut in P9, ahead of Rio Haryanto.