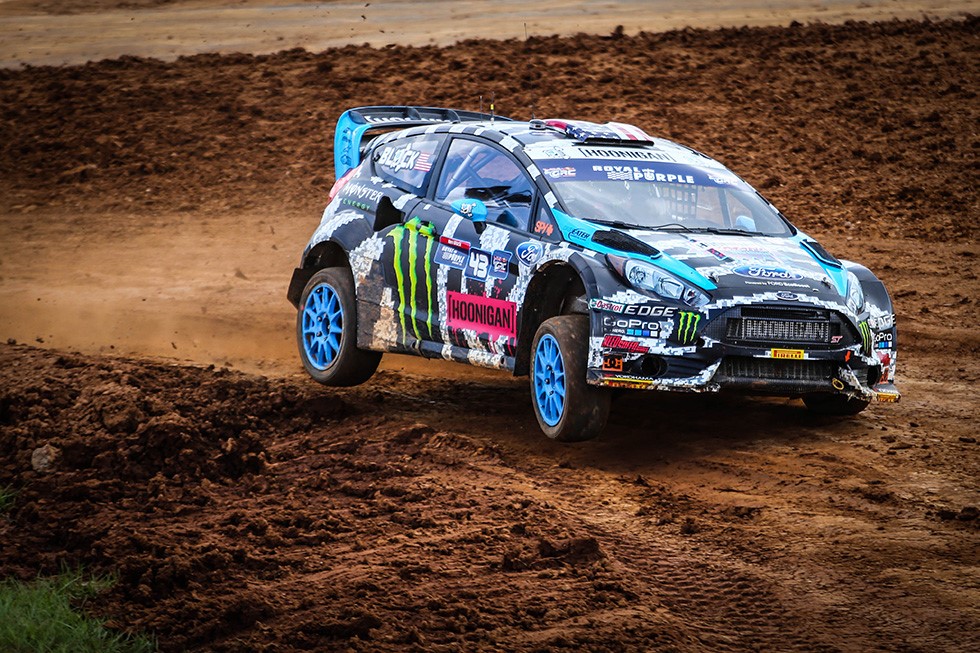 IN BRIEF: The fourth round of the 2015 Red Bull Global Rallycross season is a special one: it marks the first-ever rallycross race on an active military base. MCAS New River in Jacksonville, NC will host 600 horsepower Red Bull GRC Supercars as they compete on the longest course in series history.

TICKETS: Admission to Sunday's events is free and does not require a ticket. Gates open at 10AM local time.

LAST RACE: Tanner Foust and Sebastian Eriksson split the two Supercar rounds at Daytona International Speedway. Eriksson, the only driver to podium in both rounds, eventually claimed the points lead heading out of the event, while five drivers claimed the six available podium spots.

DRIVER CHANGES: 12 Supercars will compete in this weekend's event, with only one change from Daytona's driver lineup: Brian Deegan will return to the #38 Chip Ganassi Racing Ford Fiesta ST, in place of Jeff Ward. Ward will return to the Ganassi squad in Washington DC.

THE TRACK: At .993 miles, the MCAS New River course is the longest in Red Bull GRC history. With seven turns and a 65-35 pavement to dirt ratio, this will be one of the fastest courses of the 2015 season. Click here for more information on the track.

FAMILIAR SCENARIO ATOP SUPERCAR POINTS: Just like the end of last season, Ken Block sits second in Red Bull GRC points, within single digits of a Red Bull Olsbergs MSE Ford driver. The only differences: this time the lead driver is Sebastian Eriksson, not Joni Wiman, and Eriksson has a race win to his credit. With finishes of fourth or better in all three points-paying rounds, the Swede leads Block, 137-129, coming into Sunday's main event.

DEEGAN TO MAKE FIRST POINTS-PAYING START OF 2015: Brian Deegan's debut with Chip Ganassi Racing came at X Games Austin, where he placed fourth and nearly earned his first rallycross medal since 2012. This weekend, he'll be making his first start for the team in a Red Bull GRC championship round, where he will look for the 13th podium of his career.

WIMAN, ERIKSSON COMPLETE BASIC TRAINING: Red Bull Olsbergs MSE Ford teammates Joni Wiman and Sebastian Eriksson took part in a special basic training session with Marines on MCAS New River on Thursday morning. The drivers completed an 880-meter run, ammo can lifts, and an obstacle course that included everything from full-on sprinting to a fireman's carry drill completed on fellow drivers. Highlights of the morning will be shown during Sunday's race broadcast on NBC, which begins airing at 5PM ET.

Sebastian Eriksson, #93 Olsbergs MSE Ford Fiesta ST: "I've shown everyone that I can win in Daytona. Now I just need to go out and do my own thing, and get the best results possible. I don't think about the championship—there are nine races to go. I have a slight points lead, but we just need to take it race by race to win the championship."

Austin Dyne, #14 Bryan Herta Rallysport Ford Fiesta ST: "I just feel like we have such a good group of guys right now, and everything is going pretty well. We'll see how we are at a big track like this. I've actually struggled with this car—it's more set up like a rally car, it has a lot of movement unlike some other rallycross cars. It's a different theory of setting up a car and how a car is designed. I'm just adapting my driving style to the car every single weekend, we're getting better and better, and it's showing in practice, qualifying, and heats."

Joni Wiman, #31 Olsbergs MSE Ford Fiesta ST: "I would say there are three or four corners here that are good passing places. The first is down the straightaway, and I like that—it's not just about the start or the joker. I really like the track, the dirt is a bit tight, but it's the same for everyone. And for me, with my racing background, I'm sure this track is going to be good."