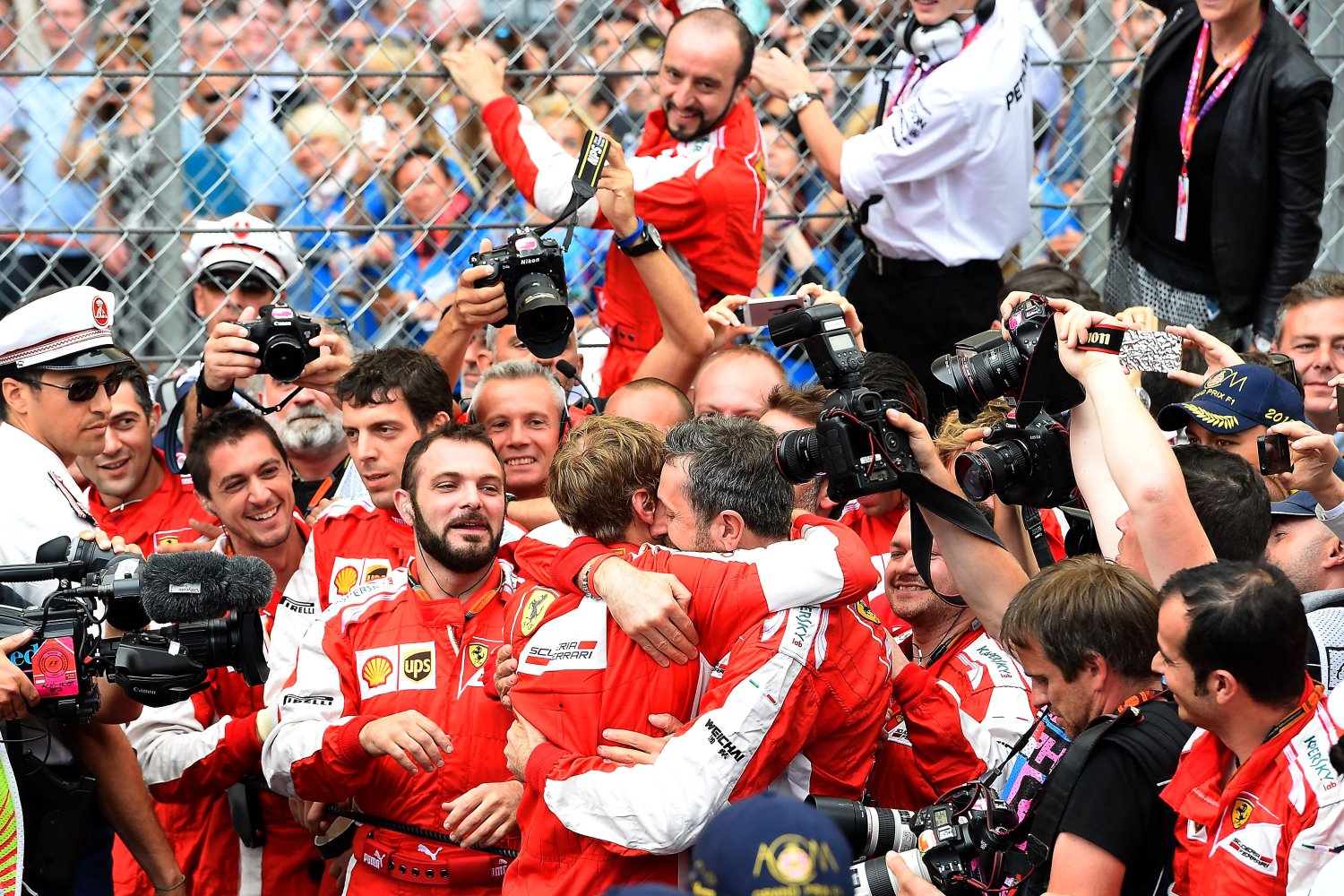 Recently, although earlier a friend and supporter of the quadruple world champion, Bernie Ecclestone slammed Germans Vettel and Nico Rosberg for being "not so good for my business".

"As the cancellation of the German grand prix indicates, Germany is a terrible market for formula one," the F1 supremo told the sport's official website.

"Sebastian is also not doing much for F1. People hardly recognize him on the street."

Vettel, however, has a completely different view, arguing that his move from Red Bull to Ferrari has benefitted the sport.

"I think my change has been positive for formula one as a whole," he told Germany's Auto Bild Motorsport.

"In Germany, the comparison with when Michael (Schumacher) drove for Ferrari is obvious. The euphoria was huge, but even now I still feel a little of that," said the 27-year-old.

Vettel said Ferrari occupies "quite a special place in formula one".

"The fascination for this brand is quite special and something very unique. For some reason, fans seem to identify more with Ferrari than with the others. The passion is simply bigger," he explained.

"I have heard that Ferrari drivers give autographs rather than receive speeding tickets," Vettel grinned. "Michael and Felipe (Massa) told me a little about this, but I think today that is no longer true."

Since deciding to leave the Mercedes camp and switch to Honda, McLaren supremo Ron Dennis has frequently said success in formula one is only possible today in works collaboration with a manufacturer or "OEM".

In 2014 and again this year, independent British outfit Williams has been Mercedes' most competitive customer of its field-leading turbo V6 'power unit'.

But Valtteri Bottas and Felipe Massa have not won a race in that period for the Grove team, and technical boss Symonds admits the works Mercedes outfit as well as Ferrari are clearly in the lead this season.

But Symonds rejects Dennis' notion that winning as an engine customer in the new era of F1 is impossible.

"I don't think being an engine customer is the end of the world," the veteran engineer, who has won titles at Renault but also worked at the back of the grid with Marussia, told UOL Esporte.

"Everybody started to talk about it because of what Ron Dennis said. But when people like me talk to people like you (journalists), we do it for a reason.

"And I think Ron wanted to clarify his point of view, or explain why he had chosen to be with Honda — to convince his sponsors that this is the only way to win," said Symonds.

"He forgets that in 2009, McLaren was the main Mercedes team and they were beaten by Brawn, who were the customer. So it's something that can be done — and why can't we do the same?" he insisted.

"They work with us all of the time," he said, "during the race weekends, in our performance meetings and doing things like video conferencing when necessary.

"They are contracted to work for Williams, so it is in their interest not only that Mercedes wins, but that Williams-Mercedes can win as well," added Symonds.

Hamilton 'happier' with 2015 Mercedes form
(GMM) Lewis Hamilton is heading into the Austrian grand prix as the overwhelming favorite to win.

The world champion and 2015 title leader bounced back from the Monaco strategy blunder, and back-to-back wins by his Mercedes teammate Nico Rosberg, to dominate the recent Canadian grand prix.

"Nico was quick," said Hamilton, "but I felt like I always had it under control.

"I had a bit of time in my pocket to be able to pull it out when I needed, so it (the pressure from Rosberg) was never too serious."

The signs for Austria, therefore, are ominous.

But last year at the Red Bull Ring, it was Rosberg who won, following a qualifying spin for Hamilton.

In Canada, where his run of wins ended, the German joked that he was missing his 'lucky charm' — his heavily pregnant wife Vivian, who skipped Montreal but had been trackside for the breakthrough triumphs in Barcelona and Monaco.

Bild newspaper has this week spotted the Rosbergs holidaying at their second home in Ibiza, where Nico may have been trying to convince his wife to make the trip to Austria.

"We will have to see if it is possible," he smiled, referring to Vivian's now-looming due date for the birth of their daughter.

Hamilton, however, insists he is on a run of form that is better even than in 2014, when he ultimately beat Rosberg to the title.

"I am even happier in this car than I was in last year's," he is quoted by the Austrian news agency APA.

"I don't know why, it just feels better. I'm faster this year, which is a good thing," Hamilton added.

With only two in-season tests taking place in 2015, the Maranello team was criticized by Italian media last month when it revealed the driver lineup for Barcelona.

"It is really difficult to understand why Ferrari is not fully exploiting this chance to test," La Gazzetta dello Sport wrote at the time.

And now, Ferrari has announced that Gutierrez, linked with several Mexican team sponsors, will return to the cockpit in Austria next week, this time joined by teenage GP3 junior Antonio Fuoco.

But Finland's Turun Sanomat claims that Kimi Raikkonen had initially been scheduled to test at the Red Bull Ring.

That plan, however, was before Gutierrez and Marciello lined up in Barcelona.

It is suggested the original plan was for Sebastian Vettel to test in Spain, before Raikkonen gets the Red Bull Ring outing.

Had Raikkonen run as originally scheduled in Austria, however, it would have tipped the testing tally in his favor, after both the Finn and teammate Vettel got six days apiece in the winter.

McLaren-Honda 'will not give up' – Alonso
(GMM) McLaren will not "give up" after a frustrating outing recently in Canada.

That is the claim of Fernando Alonso, despite being quoted in recent days suggesting the Honda-powered team should now switch its focus to 2016.

Although notably struggling so far this year, McLaren-Honda has made obvious progress but it faltered on the long straights of Montreal two weeks ago.

For the first time, star driver Alonso let his frustrations show, accusing the team of making him look like an "amateur" by ordering him to save fuel.

But managing director Jonathan Neale denied Alonso had been reprimanded for the outburst.

"No, Not at all. I like his attitude," he insisted.

"We've had too much of the super-controlled, super-smooth stuff. Just tell it as it is. We've just got to get on with it," said Neale.

Indeed, since the Canada setback, McLaren has reportedly offered to step up and speed up its support to Honda, the team's new works partner that is struggling with the steep learning curve of the complex 'power unit' era.

Austria this weekend, however, is expected to be another difficult outing for the underpowered MP4-30, despite the debut of a new bodywork package and 'short nose'.

And not only that, boss Eric Boullier has warned that McLaren is now considering "strategically implementing" further updates, presumably on the Honda side, which could mean grid penalties as per the long-life engine rules.

But Alonso said the team is still looking forwards.

"We expected Montreal to be difficult because of the nature of the circuit," he said, "but obviously a double retirement was especially disappointing.

"But just because a weekend doesn't go to plan, it doesn't mean we give up. We're still seeing great progress every weekend, and we hope Austria will be the same."

Honda promises more power as pressure mounts at McLaren
Honda is hoping to up the power of its engine over the coming races in order to ease the growing pressure on McLaren to perform.

The new McLaren-Honda partnership has scored just four points this year after suffering from persistent reliability issues, including a double retirement at the last round in Canada. The Canadian Grand Prix also exposed the power deficit between Honda and its rivals, with the McLarens as much as 35km/h slower than the quickest cars on the straights while struggling with fuel efficiency in the race.

Honda spent two of its power unit development tokens ahead of the Canadian Grand Prix and boss Yasuhisa Arai says there is more to come.

"We have seen good progress in those two areas [aerodynamics and chassis] between Australia and Canada and maybe in a few more and in the second half of the season we can achieve top level performance and compete with the top level teams."

Racing director Eric Boullier admits pressure is mounting on the team, but says the McLaren board still trusts in the work it is doing.

"There is pressure, it's normal," Boullier said. "We are all competitors and we want to win and be competitive, so there is pressure on Honda, McLaren and our shoulders.

Boullier said both power unit and chassis were currently lacking compared to the best in F1.

"If you want to win, you have to be the best everywhere. In terms of aerodynamics, vehicle dynamics, chassis, power unit and drivability – we have to improve everywhere. We are lacking in downforce to be the top chassis, so we have to work on this and make it better. It's a new concept, a new philosophy this year and on the Honda side there is of course more work to be done in terms of performance." espn.co.uk