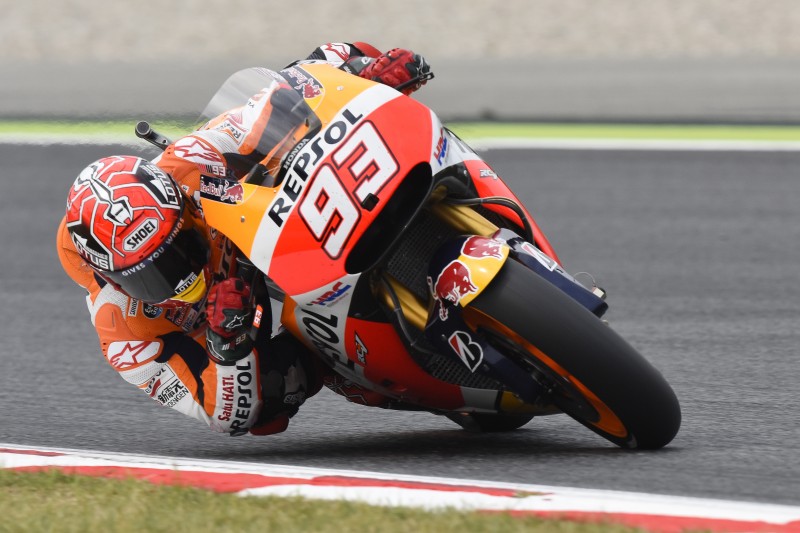 Movistar Yamaha’s Lorenzo led from start to finish once again to close the gap on his teammate Rossi in the standings to just one point, much to the home crowds delight. The Spaniard controlled the race from the front beautifully to claim the second 1-2 of the season for his Factory Yamaha team after Le Mans.

Repsol Honda’s Marquez was battling with Lorenzo for the lead in the opening stages of the race before crashing out at turn 10 on the third lap, possibly ending any chance he has of retaining his MotoGP World Championship title in the process.

Track temperatures reached almost 50 degrees, the hottest recorded over the weekend, as the MotoGP race at the Gran Premi Monster Energy de Catalunya got underway. Lorenzo led into the first corner as Team Suzuki Ecstar’s pole-man Aleix Espargaro dropped down to 9th after he struggled to propel his GSX-RR off the line.

Immediately Lorenzo set about finding his rhythm, and by the time Rossi had moved into second on lap 4, the Spaniard had already establish a 1.5 second lead at the front.

Try as Rossi might, he could not make any serious impression on this gap until Lorenzo eased off on the last lap, and the nine-time World Champion had to settle for second, 0.885s behind his teammate.

Marquez’s teammate Dani Pedrosa rode a lonely race in third, finishing over 19-seconds behind Lorenzo. Ducati Team’s Andrea Iannone claimed fourth, after a great fight with Bradley Smith on the Monster Yamaha Tech 3 M1, with the British rider crossing the line in fifth as the leading Satellite rider.

Maverick Vinales on the second GSX-RR recovered from finding himself down in 11th after a disastrous start from the front row, to finish in a career best sixth position.

Danilo Petrucci (Octo Pramac Racing) and Alvaro Bautista (Aprilia Racing Team Gresini) completed the top ten, as a number of riders either crashed out or retired.

Yonny Hernandez, Cal Crutchlow, Andrea Dovizioso, and both of the Espargaro brothers all hit the deck as only 16 riders completed the race.