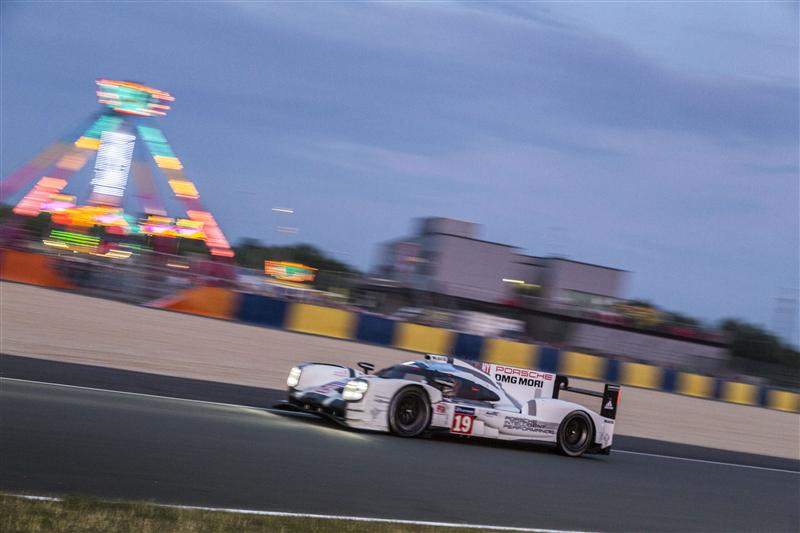 Porsche is getting closer to a 17th overall victory in the 24 Hours of Le Mans, with the No. 19 Porsche 919 Hybrid of Nick Tandy leading by a lap.

After 20 hours the No. 19 Porsche was still a full lap clear of the No. 17 sister car, now driven by Timo Bernhard. The No. 9 Audi R18 e-tron quattro is third, two minutes behind the second-placed Porsche.

Audi's chances of winning Le Mans once again were dealt another blow just minutes before the end of the 20th hour. Andre Lotterer was informed that the No. 7 Audi R18 e-tron quattro was given a drive through penalty.

The reason for the drive through penalty was Marcel Fassler not respecting the slow zone earlier, while trying to unlap himself from Nick Tandy.

KCMG, which has led the race since the start, suffered a scare in the 19th hour when the team’s No. 47 Oreca 05 Nissan suddenly stopped at Arnage. Richard Bradley managed to get the car back on track, but it allowed the No. 26 G-Drive Racing Ligier JS P2 to get back onto the lead lap.

Another confirmed retirement is the No. 42 Strakka Racing Dome S103. The car coasted to a halt on the pit straight, with fluids leaking from the car. Nick Leventis eventually got the car as far as the Esses, but a gearshift issue led to the inevitable retirement from the race.

In GTE-Pro the battle between the No.64 Corvette C7.R and the No. 51 AF Corse Ferrari 458 Italia continued, with Tommy Milner leading Toni Vilander by a mere 10 seconds with five hours left. With four hours to go both cars were in the pit at the same time, the gap just over a second.

AF Corse lost the GTE-Am entered No. 55 Ferrari 458 Italia after it ran out of fuel. Alex Mortimer was forced to park the Ferrari at the exit of Indianapolis, while the Italian team was standing in the pits awaiting its arrival.

Mathias Lauda leads GTE-Am in the No. 98 Aston Martin, the SMP Racing Ferrari is still in second place, despite an off at Indianapolis.

Light rain was reported right at the end of the hour, with Eduardo Freitas declaring a wet track.