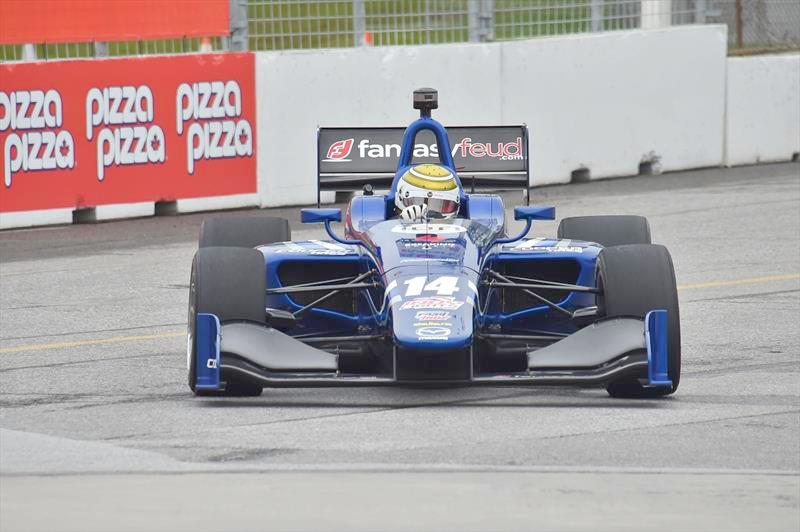 Nelson Piquet Jr took pole position this morning in qualifying for the Toronto round of the Indy Lights Series presented by Cooper Tires. The Brazilian was near the top of the timesheets for the majority of the session but it was his final lap that claimed the top spot ahead of this afternoon’s race. Ed Jones was also competitive on his first visit to the challenging street circuit, but struggling for grip qualified sixth.

After limited running yesterday, both Piquet and Jones faced a steep learning curve this morning in the 30 minute qualifying session. After rain yesterday the track proved slippery as the drivers began their first qualifying laps, with several drivers spinning. Piquet was quick to show his pace, going P1 in the first 10 minutes of the session.

Jones was spending time learning how to get the most from the difficult street surface and was around fourth on the timing screens. Piquet meanwhile was in the pits for his first set-up changes and on returning to the track reclaimed provisional pole having fallen down the order.

With just under 10 minutes of the session remaining, Jones was running in sixth, while Piquet made one last pit stop for a set up change and new tires having dropped to fourth. On returning to the track, Piquet was pushing hard to get his Cooper Tires up to temperature and made his last lap count taking pole position just after the checkered flag was shown. Jones, who had spun while pushing hard on his final lap, made his way back to the pits in sixth.

With the drivers’ second fastest times setting the grid for race two, Piquet will start third and Jones seventh on Sunday.

Speaking about his first qualifying session in Indy lights Piquet said, “It’s a difficult track but I knew with a bit more time we could get a lap together. With a new car you’re always exploring; exploring the tires, the grip, the track. It’s about finding the maximum as quickly as possible. We made some set-up changes and managed it in the end, so it’s good."

When asked about how the Indy Lights Series fits in with his racing plans, Piquet said, “I’m a racer. Whether it’s a go-kart, an Indy Lights car or Formula E car, if it’s a good situation I enjoy it."

Jones added, “It was a disappointing session for me really, I made too many mistakes which cost me. We know from what Nelson we did that we had a car for pole so I’m looking forward to plenty of overtaking which we showed we could do in Indy last month."

Race one of the weekend will take place at 16.50 local time today.